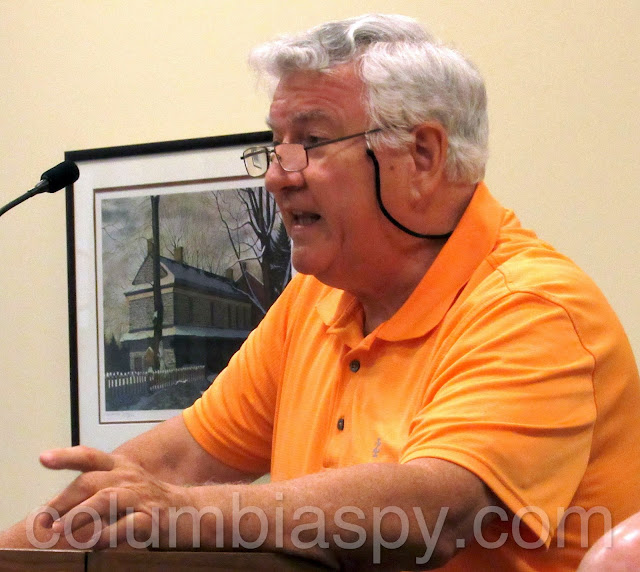 Norm Meiskey asked pointed questions and occasionally admonished borough officials over concerns about spending, legalities and hiring procedures at Monday’s Columbia Borough Council meeting. At the outset, Meiskey, a former Columbia Borough manager, asked where in the borough code the Commonwealth of Pennsylvania specifically authorizes boroughs to give taxpayer money to a private individual or organization for their gain or profit. Meiskey was referring to a meeting agenda item to consider giving $650,000 to Cimarron Investments, LLC for a proposed hotel development project at Second and Locust Streets. The funds would help the developer renovate a former potato chip factory there under the Clarion Hotels name. The issue became moot for the time, however, when borough solicitor Robert Pfannebecker said the item was “tabled to get more information.”

Meiskey pressed on, nonetheless, explaining the borough’s responsibility when considering such a project. ”This is taxpayers’ money that you have a fiduciary responsibility for,” Meiskey told council. “You have significant due diligence to perform." He explained that such diligence consists of obtaining a technical viability review of the project from a borough consulting structural engineer or architect. "You have to determine the veracity of the engineering designs, construction methods, materials, cost estimates, contingencies,” Meiskey said. He added that the borough also needs to have a financial viability review and needs to know the veracity of all organizations involved, as well as the project investors and funding sources to ensure project completion. "The borough code is structured to address issues like this - and not in the manner in which it is proposed,” he said. "There are mechanisms, and you need to use them as prescribed."

Meiskey named organizations the borough can team with for the project: the Columbia Economic Development Corporation, Lancaster County Economic Development Company, or a redevelopment authority. He explained that such organizations can make sure that due diligence items are addressed "but not in the manner in which you propose to simply give it away through some grant or gift or even loan." He cautioned council not to give funds in a manner that is a violation of the borough code. He said case law is very clear: "Municipalities of the Commonwealth of Pennsylvania can only do what the borough code specifically authorizes." According to Meiskey, unless something is specifically authorized by the code, the borough is not permitted to do it.

Council had also considered offering tax abatement for ten years for improvements to the building, but Meiskey said that LERTA (Local Economic Recovery Tax Assistance Program) “is the only mechanism you have." He added that any tax assistance program has to be done by ordinance and in a manner prescribed by law - and not in the way identified on the agenda. “You have the responsibility to prescribe tax assistance on a manner prescribed by law,” he told council.

Citing priorities the borough should consider, Meiskey said, ”There are infrastructure needs in this borough that are significant.” He said the borough has “alligatored” roads, poor drainage, and empty hotel buildings. He pointed out that the borough now has money it never had before, citing $8.7 million transferred by the borough’s former municipal authority two years ago before the entity was dissolved by council. Meiskey said that the engineering, administrative, and finance experience in the municipal authority could have handled all due diligence items of the hotel project. 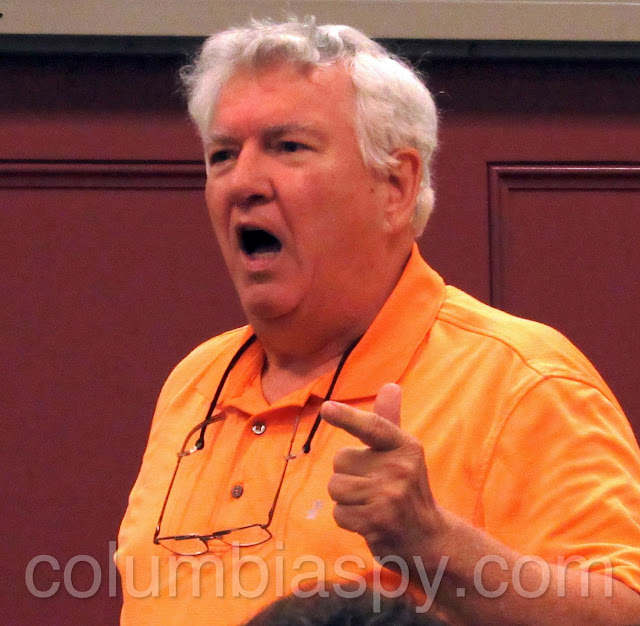 "Why put the taxpayers in a position where they have to cover lawsuits, improprieties, and violations?"

Equal Opportunity Employer?
Meiskey also questioned council’s proposed hiring of a new borough manager. "You need to be transparent here,” he said. During questioning by Meiskey, borough president Kelly Murphy offered that the proposed borough manager has never managed a municipality, and that the position was not advertised, nor was the assistant borough manager position. Meiskey cited a case in which taxpayers paid tens of thousands of dollars because borough council did not comply with EEOC requirements. "Folks, when are we going to learn, really? Why put the taxpayers in a position where they have to cover lawsuits, improprieties, and violations? Are we an equal opportunity employer or aren't we?" Meiskey asked. He advised council to proceed in a manner consistent with EEOC requirements, because ignoring them has cost the taxpayers in the past. 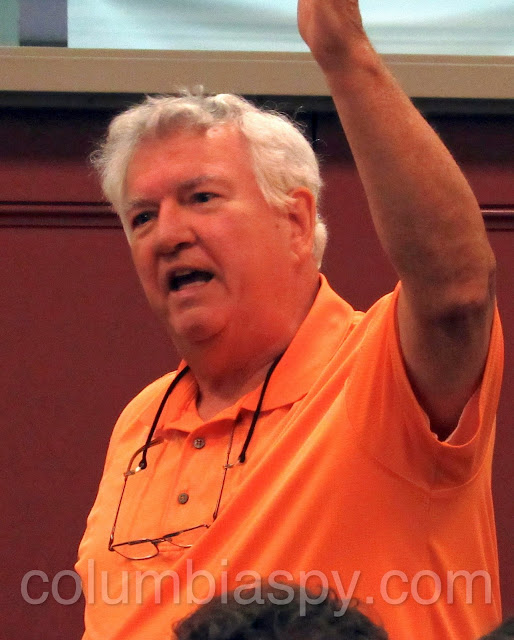 "You need to pull the reins in.”

The Trolley: Nice to Have or Must Have?
Meiskey cautioned council about spending for the borough’s trolley. “It's important that you differentiate between 'nice to have' and 'must have.' It's taxpayers' dollars,” he said. Meiskey read off the trolley expenses: personnel $8400, expenses $5,000, maintenance and repair from $5,000 to $11,000. "You need to pull the reins in,” he said and added that council needs to look at rates of return. [Editor’s note: Council authorized $11,000 for Susquehanna Heritage to manage trolley operations this year.] 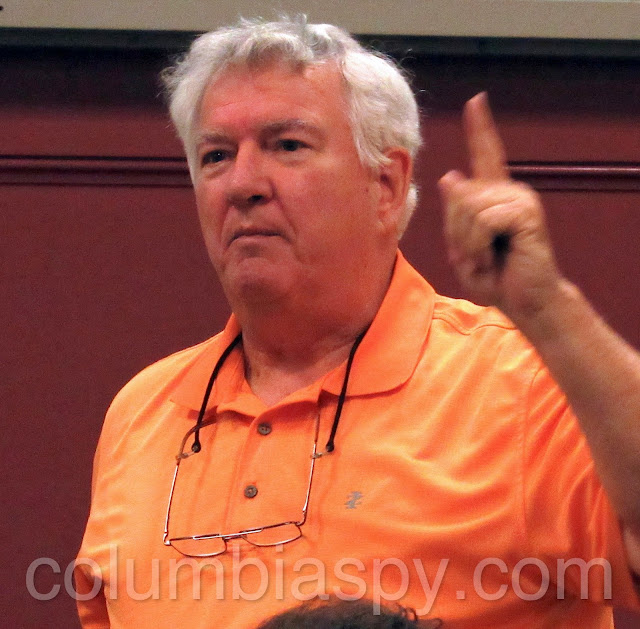 5 Vehicles for 5 Part-time Code Officers
Meiskey also questioned the need for five vehicles for five part-time code officers. ”Who's managing the schedules that requires a vehicle for each part-timer?" he asked.

Is the Borough EEOC Compliant?
Despite Meiskey’s cautions, council voted unanimously to appoint Rebecca Denlinger as Columbia’s new borough manager. (Previously, council appointed Denlinger as Assistant Borough Manager/Secretary/Treasurer, effective January 1, 2018. She was expected to become manager at the end of this year. The manager position became available a few weeks ago, however, when borough manager Greg Sahd resigned.) After the vote, Meiskey said "I've got to admit I was extremely disappointed that we've got elected officials that appear not to be concerned about [being] EEOC compliant - the fact that we had signed consent decrees to be an equal opportunity employer, and you just pooh-poohed it. That's very disheartening."

Tax Decrease - Council Can Still Do It
Meiskey also asked about a proposed one-quarter to half a mill property tax decrease that had previously been promised. Murphy explained that it did not pass approval during budget meetings. Meiskey said the municipal authority worked very hard getting things arranged, and turned over $8.7 million to the borough for capital improvements, and left another $1.8 million in investments that the borough took over, as well as over $400,000 in cash. (Currently, about $6.8 million is left.) He said the negotiated sale of the borough’s conveyance system to LASA helped get the borough in a financial position it's never been in before. "About one third of the property owners were disadvantaged by the deal we struck with LASA, but we looked at every way we could to cover those people at the minimum payment level” but it would have caused considerable difficulty due to skewing the rates and so on. Considering that, the appropriate thing to do was to try to get a property tax decrease, according to Meiskey. A quarter of a mill would have been about $110,000 for that first year, and $165,000 for half a mill. “You can still do it,” Meiskey said.
Posted by Joe Lintner at 5:26 PM