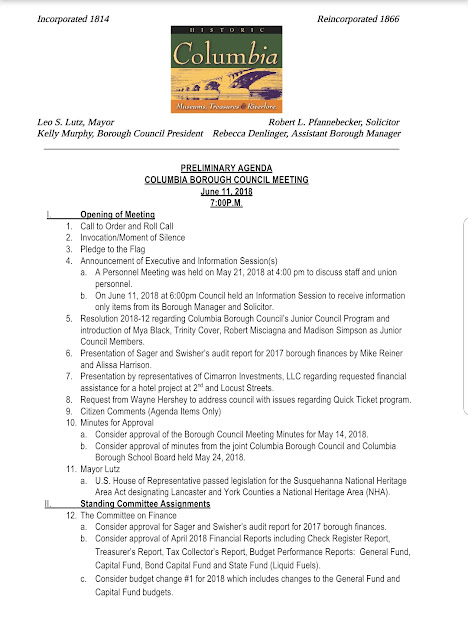 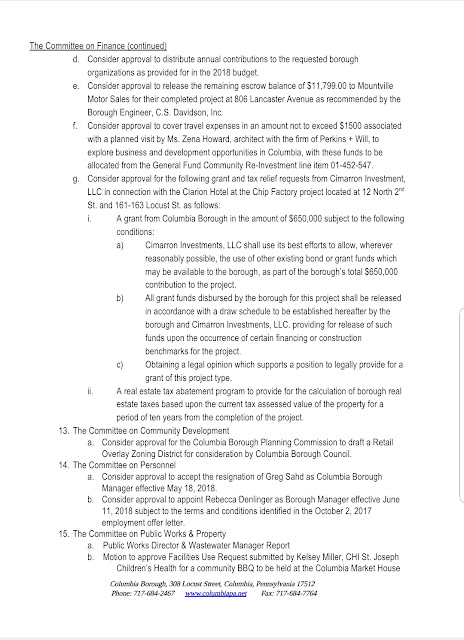 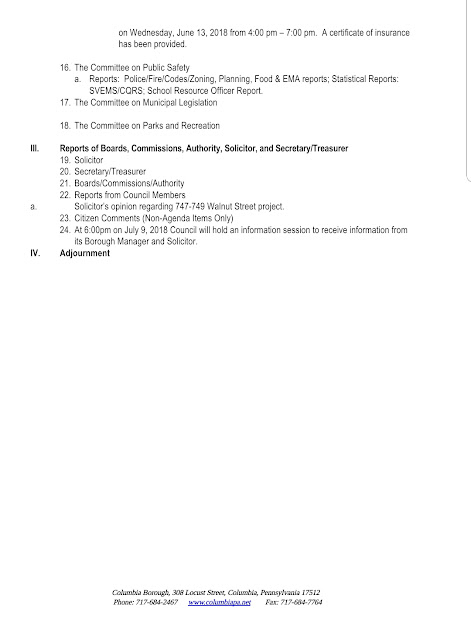 And the spending continues! !!!!

$12,000 to Mountville motor , do the tax payers get free cars? what is this council thinking?

Come to the meeting and voice your concerns time for this spending to stop.

Its their escrow account. Its mountville motors money that was held to make sure the project was done properly. The taxpayer's are not giving it to them.

THEY DON'T LISTEN TO ANYONE ,council meetings are a joke, if they ran the town like a private company these b/s would never happen. It is to many people that think they are gods , CLEAN HOUSE , THESE PEOPLE HAVE TO GO THEY ARE MAKING THE TOWN A LAUGHING STOCK OF THE COUNTY.

Really how much was held to begin with?

Can the tax payers stay for free?? 10 years of pro rated taxes too.

I didn't see the boro manager job advertised? How do people get or know about jobs?

FIRE THE WHOLE BOUNCH GET PEOPLE FROM TOWN AND GET PRIDE BACK IN TOWN, it has been lacking for years.

This is not the borough job to hold private money , there is more to this. they can inspect but have nothing to do with the money unless the tax payers are paying part of it , and why $650,000 tax payer money to cimmeron for a private hotel , this sounds like more back door stuff.

Like $90,000 study to spend more tax payer money at the money pit,gezzzzz

Using the LASA money again I presume? Should be all used up by now. Too bad none of that went to a good cause. Buying homes to give to the land bank, fencing for the mayor for his home at the river park, wasted money on a survey, new Street sweeper, 650,000 for a hotel that will never get done. Too bad we didn't get some streets paved with that money. We citizens didn't get a drop of that money for our benefit.

Wow....get an understanding on how this works. The borough is not holding Mountville Motors money...a bank is but the borough has control of when it can be released, which is usually in increments. Think of it as an insurance policy to protect the taxpayers in case the developer does something that damages public interest, like a street. If the developer does not fix it properly, the Borough can dip into the escrow funds and have it fixed. It is a common part of the planning/building process that happens in municipalities on a daily basis though out the state. Take time to read other municipalities minutes and you will see this happens all the time but unfortunately for us, we have very little development going on in Columbia as opposed to other municipalities.

As for the $650,000 in tax payer dollar for the hotel...I agree, whats up with that. Reminds me of the convention center debacle.

Great intellectual reply! What is the return by Cimmarron Properties to Columbia Borough? We are talking over $725,000 dollars over ten years? The retail business is at it's lowest in years and seems that the hotel will be self sufficient to the visitor. There is no way that $725, 000 will flow into the retail sector in the Locust Street corridor. Now Columbia can put a tax on each hotel room that will be somewhat of a return if their smart enough.

Rebecca is the one who started the land bank to buy all these properties she thinks we're a big city like Lancaster. Nice to come to a small town and run it and make big money. Maybe if they would spend less money in the boro people wouldn't move because of high taxes.

What time does the puppet show start?

Okay, so they did that with Mountville Motors, protected the public interest, taxpayer money. Where we really need the protection is with UGI ripping our streets all to hell. The best street we have now is Heritage drive.

You are so right that is where their interests are. I would like to see a big group walk into a meeting and say we are fed up with what you are doing with our tax dollars. It will even get worse with Rebecca. We need a local person who is really interested in our town. Think of the seniors who are on a limited income but paid taxes for years and can't hardly on a limited income.

Wasn't There Talk At One Time Of A Convention Center Where Turkey Hill Experience Is ???

THIS GROUP DOESN' t care they just spend , through money at or away take your choice.

WHO IS THE BOSS , NO ONE CAN ANSWER BECAUSE THE GROUP WILL ONLY TAKE CREDIT WHEN IT IS GOOD, so we don't see it too offen.

Some one should hold are tax money from council , like the escrow for mountville motors to protect our tax money!

This is Columbia not Lancaster, what don't you see? The Marriott has Lancaster and Lancaster county tax payers paying for it. Not to mention the rest of the hotels and motels taxed to pay for it , Who is going to pay in Columbia? Please don't say the tax payers, we don't need or want it , if it is to be let it be private not a burden on the tax payers .

WE (tax payers) lost enough money on Turkey Hill . YES THEY TALKED ABOUT IT.Maybe the council rolled a big , fat one first.

Shut down the failing school , move the whole borough and police , up on the hill,that way they are closer to what they think they are.