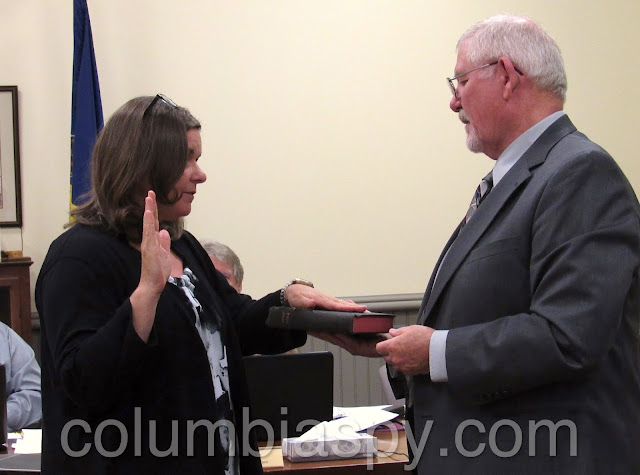 Rebecca Denlinger took the reins as Columbia's new borough manager at Monday's Columbia Borough Council meeting. Denlinger had been serving as a full-time Community/Economic Development Director/Assistant Borough Manager since January 1 of this year. She was being groomed to become borough manager at the end of this year, but the position opened up early when Greg Sahd resigned last month.

Denlinger holds a Bachelor’s Degree in Political Science and Economics from the University of Delaware, and a Master’s in Public Administration from Penn State. She has worked with the Elizabethtown Area Chamber of Commerce, Rettew Associates, Inc., and the Lancaster County Planning Commission and also served as a consultant for Marietta Borough last year.

She and the mayor were told it was a ILLEAGEL HIRING and they did it any way, COLUMBIA LEADERSHIP . Bring on the law suites , thank you mayor and council still costing tax payers money.

This was a fixed deal.No one had a chance to apply for the job. boro does need checked on and especially the people we voted for to work for us. It's like a puppet show they all shake their heads to yes.

Hope there will be a law suit

Initially, Rebecca Denlinger was hired by the Borough of Columbia, as an independent consultant. This was approved by the Borough Council, at a public meeting. The meeting is open to the public.

Name one thing she has done for our economic development. Is Colonial Metals, Kleen Rite and Market House her claim to fame. Give me a break and this appointment was a typical back door deal and us taxpayers are awaken by a incoherent Council.Council whisked Sam Sulkosky out of town and of course our loss is now making a major impact in Mount Joy's economics. H

they hired her to a position that was not in code, they made a ordence after it

The assistant borough manager position was not advertised after the ordinance creating the position was passed.
Even as an independent contractor, she was provided an office in the municipal building.
Hooray to Columbia for hiring its first female borough manager. Let's hope it's the beginning of the end for the "old boys" club.
We'll see.

She is what Leo wanted all long!