Colonial Metals closing - What we know so far 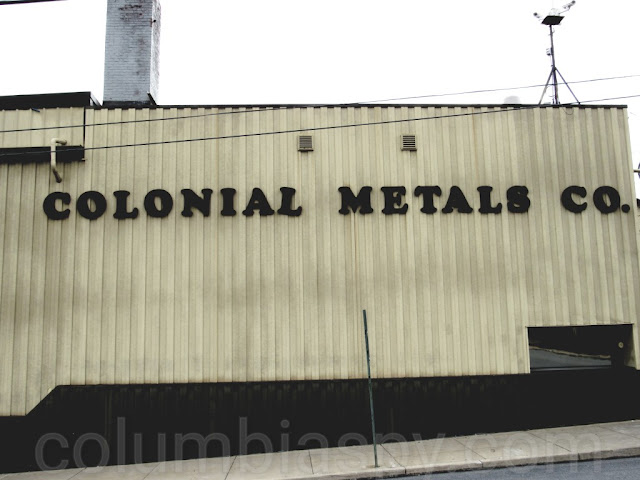 The Colonial Metals plant on North Second Street was eerily quiet this week.

Colonial Metals is closed, apparently for good, according to a discussion at last night's school board committee of the whole meeting. The closing idles about 100 workers, who were shut out about a week ago with little or no warning.

The company is reportedly appealing its property tax assessment on the main plant and other nearby buildings it owns, including an office building, and several houses, among other properties. If the assessment is lowered, the Columbia School District could lose up to $150,000 in tax revenue. In addition, Columbia Borough could lose up to $40,000 in tax revenue, as well as revenue from the Earned Income Tax, due to the loss of workers in the borough. The appeal process was reportedly begun some time before the shutdown announcement. It is unclear at this point whether the company has initiated bankruptcy proceedings.

There is currently no notification of the closing on the company's website, and information has been scarce. On Monday of this week, Columbia Spy noted that the plant was eerily quiet and the parking lot was empty. Phone calls by Columbia Spy to company president Craig Friedman have so far not been returned.

Colonial Metals Co., which opened in Columbia in 1946, was one of the nation’s five largest brass and bronze ingot makers. Friedman was named president and chief operating officer in 2015, after 12 years as executive vice president.
Posted by Joe Lintner at 5:29 PM

DO NOT let them lower the assessment. The building value remains whether or not the building is occupied or empty. We cannot afford to lose one more red cent of property taxes!!!!

Give him two effin years and he runs it into the ground....wow!!!

Not the first time hes done that.....

shut down the school get rid of strickler

We see in the Lancaster Newspaper all about Worley & Obetz, but nothing on Colonial Metals. If this is about an assessment I would be shocked. Maybe the Watchdog Chad Umble should be notified to get it to print in the Sunday News. Shouldn't Rebecca Dellinger be on top of this closing? That land is prime and should go for some big money for redevelopment which could be a reason to close the plant.

Pay attention Columbia is running businesses out of town. They took property from eastern drillers, and screwed lesko, and heisey mechanical with street restrictions, even kleen rite pulled out

This is what happens when people that are in charge think they (borough) are above the common citizen. They are to work for the people , and they should remember who pays them.

Council president stated they haven't raised taxes in 10 years , that means people were over taxed for 10 years or they would not threw money away like they do , run businesses out of town,we have to get these JOKERS out of control of this town,term limits , get Helm out to start with , give the state the health inspections , the controller got to go , TURN THE SCHOOL OVER TO THE STATE OR SHUT IT DOWN , Strickler back door enterance makes the borough look like the laughing stock that was stated here, council no more than 2 terms ,borough employees should live here NO EXCEPTIONS , We LOOK LIKE A BOUNCH OF CLOWNS . Does any one ever read about other towns doing the crap these people do? When Norm Mieskey retire this borough went to hell , they think they are above the law ,did anyone ever hear of the Quick tickets the way these people have it set up , there are fines with due prosess but not this b/s these people are doing . CLEAN HOUSE , REBECCA KNOWS NO DIFFERENT IT WILL CONTINUE , she brought the land bank idea from Lancaster and 208-210 cost the tax payers 125,999 , just for starters , when a new codes manager was against it . WAY to much to write CLEAN HOUSE OR YOUR TAXES WILL GO UP SO THESE PEOPLE DON'T BANK RUPT THIS TOWN, way beyond laughing stock !

Why don't they buy the whole town and turn it into river park ?

371 kinderhook road no permit yet ,WHY the mayors neighbor? up the hill BEHIND SCHOOL) GARAGE ROOF NO PERMIT?????? if it is good for one why not all ??????? selective enforcement started with hELM 25 YEARS AGO AND GOES ON TODAY , IT IS WHO YOU KNOW.

Columbia HAS POTENTAL BUT THE GROUP DOES'T KNOW WHAT THEY RE DOING , replace the whole crew if this was a private company it would have sunk , they are acting like dictators , this is NOT Germany , get new blood or it will be more of the same, back door , old buddy system doesn't work .

Where did they take property at from eastern drillers?

Can't sell for redevelopment unless it is cleaned up! Way to much money, this is a super fund site!

Garage is in Hempfield, know before you complain.

371 is in Columbia beside mayor lutz

Sorry you are incorrect. That home is in Columbia along with other homes behind this structure. I looked at the home behind the tennis courts and was astonished with the Columbia Borough taxes of $12,000 plus with the new assessment.

The House with the garage is in West Hempfield, I know because I did work there and bought Permits from West Hempfield. The house for sale is in Columbia

That school building would make a great borough and police building, with room to rent out , SHUT DOWN THE FAILING SCHOOL out sorce the students to a real school, SAVE TAX PAYERS MONEY.

Hopefully a guy like Doolittle will buy it and clean the site up like he did to the dirty old foundry "U.S. Lock and Hardware" on bridge street.

all true, except, "old buddy system DOES work"

If they came up with a agreeable tax ut would keep them running. Instead this town wants to be in real estate business. Wanting to give a person$680,000.00 to help build a hotel when some of his own property are in rears for taxes. It the Doctor Do Little scenario again. I will bring you all business you give me towns money I show no progress I take money and say kiss my ass. It's time to get King Lutz and his mininons out of office. Wr have a $33,000 trolley free rides no revenue. This is what our ass clown mayor and puppets are doing to our town. Screwing us with our pants on.