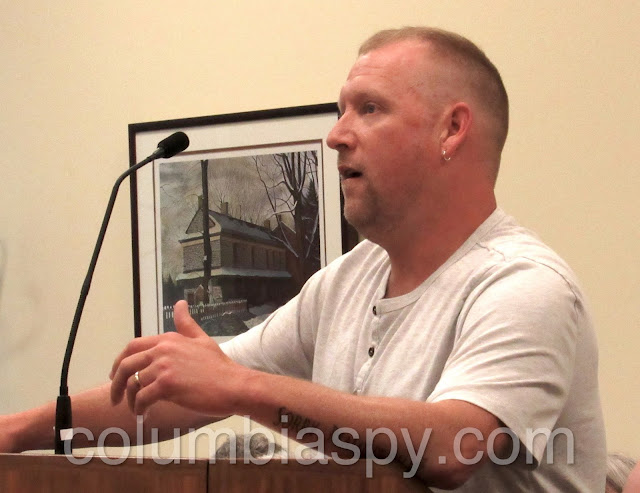 Murray: “I don't want to see money pissed away like this.”

Several Columbia residents voiced concerns about a proposal by borough council to fund a $650,000 grant for a possible hotel project at Second and Locust Streets.  The residents opposed the grant to Cimarron Investments LLC to develop a hotel under the Clarion Hotels at a former chip factory there.

Bruce Murray, owner of Elite Energy, wondered who would invest such a sum into something he believes is "unsustainable and unfeasible." He said he owns several businesses that he built with his own money. “I use my own money, and if I don't have the money, I build the capital. That's what I do. That's what investors do." Murray said his company employs about 25 people, 80% of whom live in Columbia.

“When I got wind that we were willing to give $650,000 to somebody, to start a project that's not feasible, not sustainable in this town...we're not a Lancaster City, we don't have 60,000 people.” He noted that there are hotels within three miles of the borough that don't have any vehicles in the parking lots. “I don't understand why we're putting one in our town. I don't understand why we're giving all our money up in this town.” He also objected to allowing ten years of property tax abatements for the building and pointed out a business that may have closed due to property taxes: Colonial Metals. “Colonial Metals just closed, and there's a hundred people on the street that don't have a job. They're complaining about tax assessments, tax appeals,” Murray said. He asked why the borough doesn't help the company. “Why don't we work with the owner of Colonial Metals?”

Murray said he supports investment in the town but only for projects that are feasible and sustainable. “I'm willing to give up money for a company to come in there, an investor to come in there, and build something that we structurally need, but I'm not willing to piss my money away to something that's not even there," he said. “You can't tell me we don't have any other projects in this town that we could spend $650,000 on.”

He emphatically does not think the proposed hotel project is worthwhile. “How are you going to pack that hotel on Second Street? Tell me. I'd like to know from the borough," he said. “We know you can't fill that hotel. We know it's not sustainable.”

Murray said he wishes residents had a part in what their money goes to. “I think this borough needs to wake up a little bit and the residents see where this money's being spent.” He also wanted the developer to know how he feels. “I wish the owner of Cimarron Investments was here to hear me, but unfortunately he's not,” Murray said.

He told council he has about $2 million dollars worth of properties in town but hates to see wasteful spending. “I don't want to see money pissed away like this.” 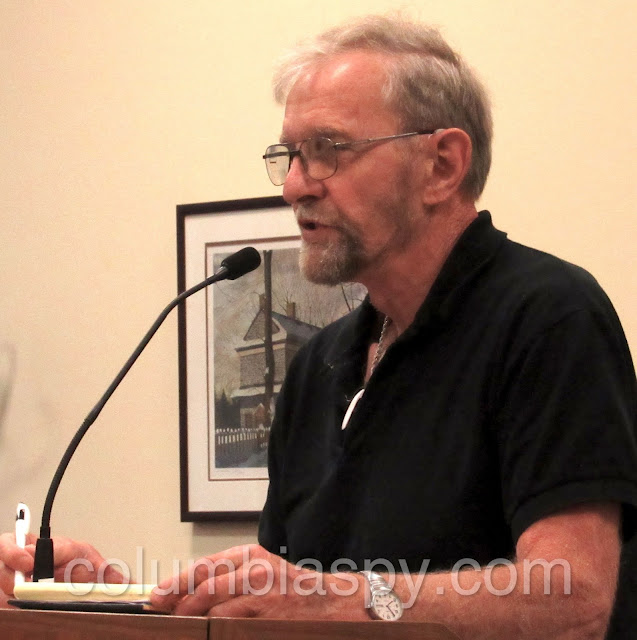 Doutrich: “I don't feel you should be in the banking business.”

Frank Doutrich also had doubts about the project and asked council for more information.  “I consider Don Murphy a friend, and I'm still going to ask the questions,” he said.

Murphy told Doutrich that even though the hotel project was listed on the agenda, council had no plans to vote on it that evening. (The matter had been rendered moot due to council's last minute tabling of the issue.)

Doutrich noted that Don Murphy told committee members at a finance meeting that he had a signed contract with the hotel chain. Doutrich asked councillors if they had seen the contract. They had not.

Doutrich wondered why council had not considered offering a loan instead of a grant but then thought that was a bad idea, also. “This is a private enterprise," he said. “I don't feel you should be in the banking business. You shouldn't be loaning money.”

“I like what Don did to a lot of his properties, how he re-did it, whatever he did, wherever he got the money, that was his business," Doutrich said. "Now, this is our money. This is why some of us are concerned. This is why we're asking the questions.”

Kelly Murphy assured Doutrich that any contract with the borough would have very defined details addressing such questions. He said borough staff would follow up to make sure all funds were being used properly. 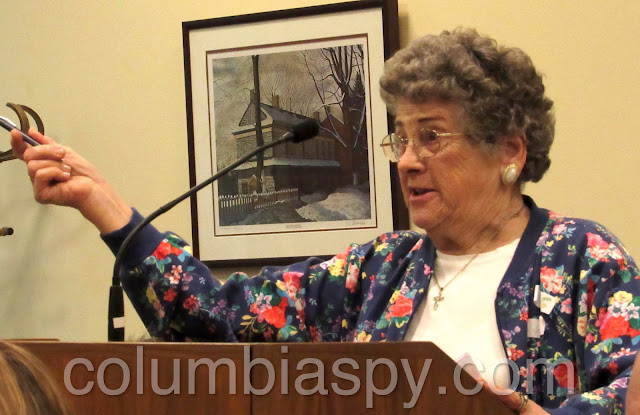 McBride: “Stop giving our money away.”

Shirley McBride, who spoke next, said, "If you give these people taxes for nothing, it hurts us. We just lost a business here in this town [Colonial Metals].” She chided council about the proposed spending. “Stop giving our money away,” she said. She told council that senior citizens in town don't have enough money for food and taxes, and she doesn't want to see people lose their homes any more.

She questioned the wisdom of building the hotel. “Why would I want a hotel down there?" she asked. "Who's going to use it? I can guarantee you not one person in this town is going to be able to afford the room rent.”

“Stop wasting our money. It's not your money." she said. "It's our money, not yours.”

However, Councilman Cleon Berntheizel took issue. “It is our money, because we are also taxpayers of Columbia Borough,” he said. He also explained that the tax abatement applies only to improvements to the building, not the current building. “That's how you help developers come into your town to build things that helps taxes in the long run.” 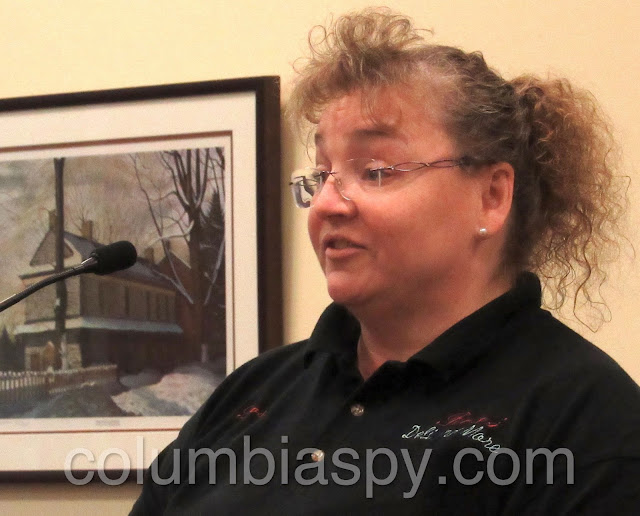 Weaver: “Putting a hotel on Second and Locust Street – what is that going to do for the town?”

Rose Weaver, owner of Rose's Deli on North Fourth Street, said she was disheartened when she heard that such a large sum might be allocated for the project.

“I do not ask the borough for anything, but I feel sometimes as a small business owner I get overlooked," she said. "I don't see any of the borough council members come into my building.”

“Putting a hotel on Second and Locust Street – what is that going to do for the town?” she asked.

She asked council to help small businesses, such as hers. She said she is trying to provide a service for people that they can enjoy and afford.

Shirley makes a valid point. There is a massive difference between being a taxpayer and owing back taxes.

No Doubt - offering grant money to developers will help ignite the downtown - however - $650,000. grant plus tax incentives for one project is ludicrous !! Perhaps they accidentally added a few zeros. A grant of $6,500 for a feasibility study would be much more appropriate - and more fair to the tax paying citizens of Columbia that provide the money to begin with! This issue deserves a detailed explanation ( and perhaps a public apology ! ,from Borough Council.

Just imagine how many small businesses could be helped with $650,000!! The entire downtown could be filled with shops of all variety! Seems that would be a better direction to go before putting up a hotel.

That is why I say to People don't invest your MONEY in Columbia let the People come into town and buy up the house s and rent them out to SLUMLORDS and bring down the town worse than what it is.

i still say that the Borough MUST do something about the 800 PLUS rental properties. STOP ALLOWING RENTALS. CREATE AN ORDINANCE IF YOU MUST (THAT SHOULD HAVE BEEN DONE 20 YEARS AGO TOO). code officers....concentrate on the slumlord properties. let them know you mean business. also encourage neighbors of unruly loud disrespectful tenants to call police on them. 3 strikes and they are O U T. (don't forget disruptive conduct reports by police who respond to the disturbance!)

I heard that on a Facebook page, Eric White encouraged Don Murphy to take his business to Wrightsville. If he is still on council, then he is speaking on behalf of the taxpayers of his borough, saying that they are willing to foot the bill for this grant. That sounds good for Columbia.

There are so many valid points being brought up, and I am happy that the town's citizens are speaking up. $650,000 GRANT is insane, it's not like they are putting a Wal-Mart in, and the room capacity is 65? How many will gain employment with a 65 room hotel? 25 TOPS, while Colonial Metals employed how many? 100? Towns give grants to Large businesses that will help the town, they receive tax breaks, that much I understand. I believe that this building would have been great as an investment property for an Apartment complex, or another business that would employ many. I agree Don Murphy has done so many great things to the Town, and I hope for his continued success, but this, effects everyone in town, that pays taxes, and unless it was a LOAN that would generate interest, and a repayment plan that would help the town, it makes no sense to me to have a Hotel in this location, or at all for that matter. Columbia Borough is not a Savings and Loan, $650,000 would do great on road repairs, small businesses, etc!

Apparently he used the feasability study that the taxpayers already paid for. WOW!

Why do they try to hde things when it's the taxpayer's money? What if the whole town refused to pay taxes? They need to be held accountable with our money. Too much back door stuff goes on.

Is Norm serous about politics ? , or just blowing smoke

Thanks Bruce !! - you have the best oil

seriously ? , do you mean that the Borough paid for a feasibility study that supported their own grant ? - that can't possibly be true - this needs to be investigated

I think the State should take over ownership of Columbia Boro and LEVEL all the properties and plant PINE TREES and then there will be no more complaining.
The people can move to Philadelphia, New York or California and complain all they want, come on Tom Wolf get rid of these COMPLAINERS once and for all.

Complaining? It's our money, what don't you understand? Residents should scream louder and LOUDER!
Keep asking when it comes to your taxpaying dollars, that's called democracy, a government by the people.

Whats wrong with council , they really do think they are above the law.

How is it in the LNP under historic board in Columbia Berntheizel is listed as owner of 24 - 26 s 2nd street asking for approvable on step railing , but in taxes owed the property is owned by cimmeron with taxes Not paid for 2016, and Councilman Berntheizel has back taxes on a chestnut street property , how can he be on council ???? Something stinks here !

Amen and hold these people to the oath they took , and if they are on council or any commeity and owe taxes REMOVE THEM .

there have been many things that have come out that we the people were not meant to know ! any person who does not pay their taxes should not be in a position on council or any position of power that has to do with funds-money or the like. we will see how this is taken care of. how do we look when these kind of things are ignored. audit is in the future when we see funds used as they have these last few years. where is our money going well look at the people who benefit see fence.

Wouldn't be the first or second time...

If so many care and demand to be heard, why is nearly EVERYONE here anonymous? And kudos to those that aren't.
W . Torbert