At Monday's borough council meeting, residents told council about their concerns and experiences with the borough's codes department, particularly on the issue of “Quick Tickets.” 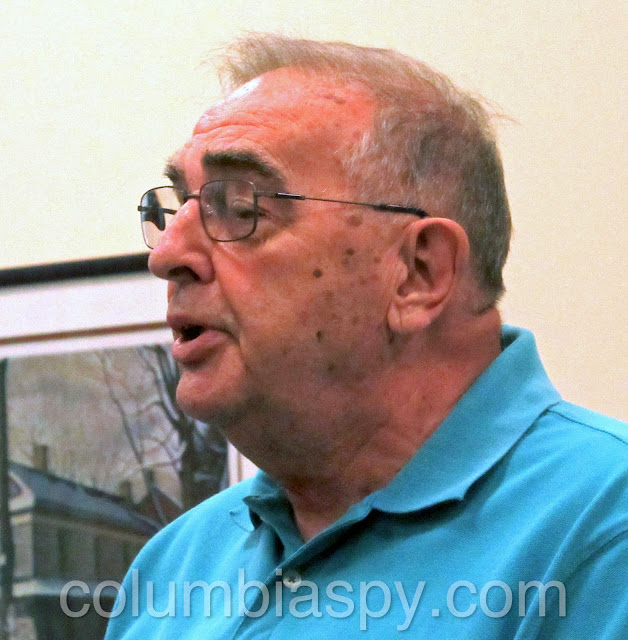 Hershey: “This isn't due process when you have to pay $100 to appeal something. It just doesn't make sense.”


Wayne Hershey asked for common sense when officers hand out tickets. Hershey said he was ticketed recently for high grass “after a month of rain. One of the hottest and wettest Mays in the last hundred years,” he said. “Five inches of rain in 11 straight days.”

Hershey admitted that his grass was high and the person he hired to mow could not do it. Hershey said he had standing water in his yard at the time. He said he must now pay $100 to appeal the ticket to the borough manager. “Everybody I talked to said, 'That's extortion.' I'm not going to pay $100 when I can pay 25 and just get out of it,” Hershey said. “This isn't due process when you have to pay $100 to appeal something. It just doesn't make sense.” Hershey noted that the borough does not run leaf pickup or the street sweeper when it rains, because it makes sense.

“Just use common sense with the code officers and get some due process that makes sense, because this certainly doesn't.” Hershey said he has heard “some real horror stories about code enforcement” from people who replied to him on social media. As an example, he pointed out that his grandson got two tickets in nine days even though he had mowed in between. “I went to look at his lawn. The highest thing there is asparagus and rhubarb.”

He said another person got ticketed when disposing of patio cushions. The ones that wouldn't fit into the trashcan were placed alongside it, as directed by the trash hauler. The person received a ticket. Someone else said they were ticketed for “dog poop” in their yard. “It was decorative rocks,” Hershey said.

A person on Chestnut Street got ticketed on consecutive days but the tickets did not arrive in the mail until two days later, according to Hershey.

He also said someone got a ticket for placing two bags of trash beside their house after returning from the mountains, and another person got a ticket because a trashcan lid blew off. “That's not common sense,” Hershey said.

Hershey said he asked a code officer about his ticket for high grass. Specifically, he asked him if he measured it, and the officer said he did not need to, because he “knew” it was 18 inches high. When Hershey told him that he must be “good” to be able to estimate that closely, the officer thought he was being praised. “I am very frustrated with this whole thing,” Hershwy said. He asked council to make corrections on the issues. 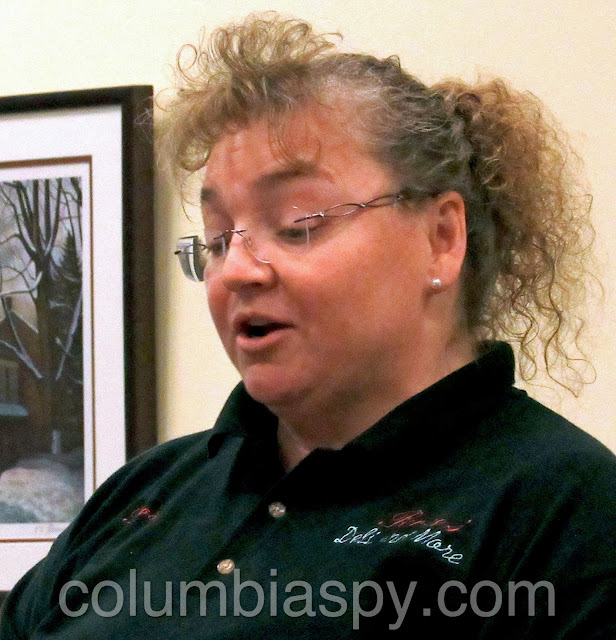 
Rose Weaver told council she received five tickets in two months last year for placing an old mattress at the side of her house on a Thursday. She said her trash hauler picks up on Mondays, and she got a ticket.

She said she received a ticket for daisies in her flower bed that the rain had pushed over onto the sidewalk. The ticket stated that the daisies were a tripping hazard. “It's a daisy,” she said. “Some of the tickets were just ludicrous.”She also received a ticket for a sumac tree on her property line with a neighbor, but she paid the ticket anyway.

The next ticket was for trash that was sitting out for over 24 hours. “My trash gets picked up Monday. The ticket was written on Tuesday,” she said.

In February she received another ticket, this one for ice. The sidewalk was treated with ice melt that day, but the next day she got a ticket for ice. “It hadn't even been 24 hours since the sidewalk had frozen,” she said. She called and spoke to the borough manager, who said she could pay $100 to appeal the ticket at the borough office. She paid the $25 instead. “I got stuck paying another ticket,” she said, but added that the ticket was later rescinded. “Maybe sometimes common sense just needs to be used.” 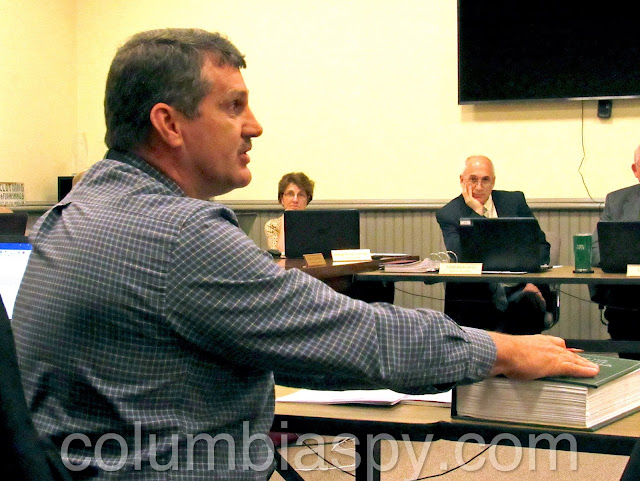 Kaufhold: “My job is to enforce this book. If you don't like what's in the book, you need to go to the legislative committee and have it changed.”


Codes Manager Steve Kaufhold told Hershey he would not address his case at the meeting, since it's under appeal. He then introduced himself to residents in attendance and explained some of the workings of the codes department. He said that some problems may stem from codes not being enforced in the past. “Most people have gotten complacent with the fact that a lot of the codes were not enforced for many, many years.”

He said that this month there were 261 tickets written. [It's unclear if he was referring to May or June.] He said he does not see every ticket that goes through the system: “It's just too much for any one person to start going through and doing that.”

Kaufhold said six more code enforcement officers were added at the beginning of last year. Two officers work three days a week and their schedules overlap. He explained that he doesn't have any thing to do with the $100 appeal fee, since he didn't set it.

He advised residents to talk to him first before an issue goes to appeal. “Come talk to us. Give me a call. I will look at it,” he said. “I try to talk to my code officers about frivolous things, but we do make mistakes.” Kaufhold said if he does not return a phone call, the resident should contact one of his superiors or a member of council. He said that returning calls is respectful, and he tries to instill the importance of that in his officers.

“My job is to enforce this book," Kaufhold said. “If you don't like what's in the book...you need to go to the legislative committee and have it changed.” 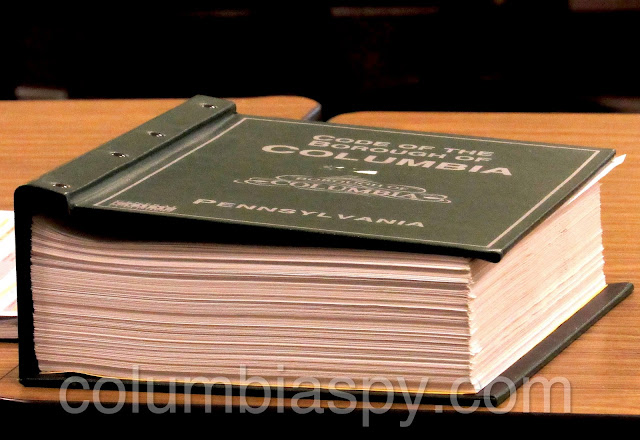 Common sense would be something new for the Coffee Club!

I don't live in columbia, but have a alot of friends and family who are affected by these useless codes. Sounds to me like you guys have an abuse of power going on.

that's another new job the boro started. It's pitiful to cite people for such frivolous things. They could site them if they want to pay their bills and taxes. What people do on their property is their business. Like having a car parked in their yard.
What about barking dogs now that's a disturbance. If we didn't have such a big pay roll maybe our taxes would come down.

Helm is making us pay , for his lack of performance.

Mr. Kaufhold needs to look up the definition of discretion. It's in another big book.

Maybe it's time for Rose Weaver to think about moving her business out of this joke of a town. Maybe then council will wake the hell up? Yeah, I doubt it, too.

I was issued a citation for trash at my fence. The trash was left from residents from an apartment on the street on the other side of my fence as they vacated the apt. I took pics and went to the borough office. I explained that the trash was from vacating apt. dwellers and did they want to see the pics that showed the trash on the outside of my yard. No - they did not want to see pics; but, voided the ticket. So, they already knew it was NOT my trash ! ?? Were they just figuring that I would just pay the ticket without contesting it?

The salary we are paying to have a person write tickets for a bent over daisy! Unbelievable! Columbia has BIGGER problems. What a huge waste of time and money. At this rate, one broken daisy just might break this town.

kudos to Steve Kaufhold for stepping up and doing what should have been done 20 years ago. Make these blighted properties come up to code. however,
some of the code officers are a little overzealous with handing out quick tickets. BUT they get their direction from COUNCIL. so, if you are unhappy about the quick tickets continue attending Boro Council meetings and demand accountability from council who has NO problem wasting hunderds of thousands of dollars continually on nonsense. it's time to stand up for our town and demand answers and respect for all the taxpaying homeowners.

It is simply a money making machine for the Borough. I bet the council will complain as they drive people away. If you want to be a first class town, you need to start acting like it.

council SHOULD be finding solutions to the more than 800 rental properties in this tiny boro. create incentives for people to purchasse rentals and turn them back into single family owned homes. stop the buses from Lancaster from bringing all these transients into the boro day after day. Lancaster put a stop to it years ago, now they all come here. think about it. DO SOMETHING.

IF people would take pride in their properties...keep the grass mowed, stop piling up trash in every nook and cranny, including the front yard, porch, etc clean up dog waster at a minimum of once a week, don't park vehicles on your property like its a junkyard and don't forget...remove all standing water, stop creating an oasis for mosquitos! IF that were to happen maybe quick tickets would fade.. although the bottom line is: THE OWNER SHOULD BE HELD ACCOUNTABLE FOR HIS PROPERTY. Force the owner to keep it clean and mowed! IT'S HIS PROPERTY. NOT ANYONE ELSE'S. PERIOD.

well said! i just looked at the merchandiser and am appalled that the illustrious Codes Dept spent all that money to print out a one sided sheet about trash and high grass and weeds. Wouldn't it have made BETTER sense to use the other side too? You could have explained a little more...like dog shit that i have to smell because my neighbors don't clean it up! abandoned unregistered uninspected vehicles! feeding stray cats and putting out boxes for them to sleep in! informing residents to call or email with a complaint-that the info on who calls can NOT be divulged! to instill in ALL residents to call 911 for witnessing drug deals, domestic abuse! and to call police for outrageous noise, fighting, etc by tenants who rent...3 strikes and they are OUT!! if you don't report these things, this Boro will NEVER get cleaned up. Let's let these irresponsible, lazy, don't take care of their properties people know that we are done. DONE! the shit show is over. WE take pride in our charming river town with the exorbitant taxes...that's next on the list. We MUST demand that our schools consolidate! we can NOT afford to pay for all these renters kids educations. it's wrong. and our parents and grand parents SHOULD not have to pay property taxes after reaching 62 or 65.....they've paid their dues and then some. THESE are some of the main things that need FIXED!!!!! ready set GO

who do you suggest that we vote for next time ?