Unlicensed, uninspected, abandoned vehicles regulated by the state ... of confusion?

Officials offered opinions during a discussion of abandoned vehicles in the borough at Monday's council meeting. The conversation stemmed from a resident's concern about the number of such vehicles and what he sees as a lack of action by the borough. Dennis Wolpert of Manor Street told council that he recently counted about a dozen uninspected vehicles within three blocks of his home. He said the vehicles are on the street, in yards, or in alleys behind houses, with some being uninspected since 2015. Wolpert also presented photographs of two damaged vehicles sitting on borough streets. 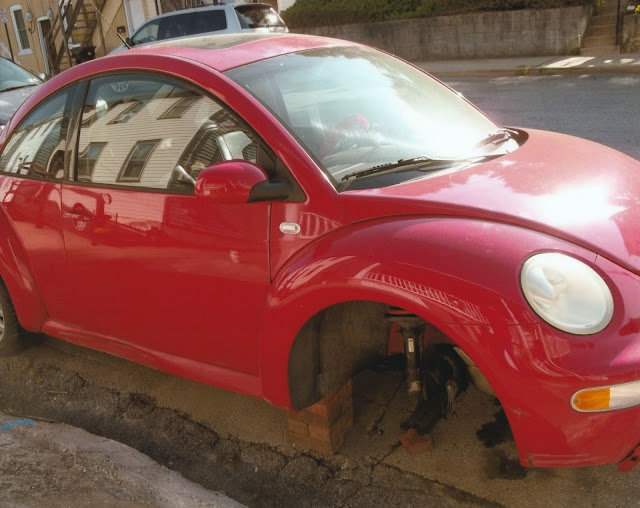 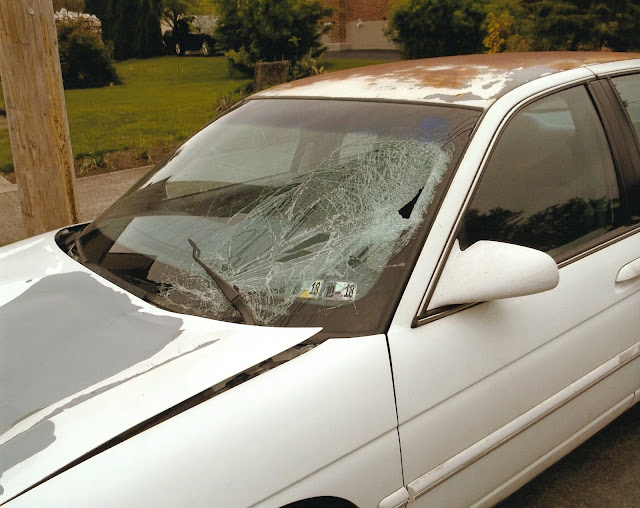 "Why do we have ordinances pertaining to all this, but yet we can't enforce them? Why do we have to have vehicles like this sitting in our neighborhoods?" Wolpert asked. He said he has talked to the police, code officers, and the mayor, all of whom told him they would take care of the problem. "I don't see anything being done about it," he told council. He said he believes the problem is a nuisance and a safety issue and urged council to strengthen ordinances to allow for the removal of vehicles from yards. Lutz replied, "This is part of the Pennsylvania Vehicle Code. We cannot create that ordinance that's contrary to a state law."

John Novak, chair of the borough's legislation committee, said, "On private property it can be addressed. On public streets, it is regulated by the State of Pennsylvania." The borough therefore cannot change its ordinance to allow it to remove an unregistered or uninspected vehicle from its streets, according to Novak. However, an ordinance exists addressing the issue on private property, Novak said, adding that he believed the borough could ask to have a vehicle removed.

Lutz apparently disagreed. "You can't go on private property and remove someone's property," he said, adding that towing companies will not enter private property. (In a seemingly contradictory statement, Lutz said the following at the August 9, 2017 legislation committee meeting: "The codes guy has been doing a wonderful job yanking them out of yards. George [Weis] is a specialist at yanking cars out of yards.") In addition, Lutz said the borough is not allowed to remove abandoned vehicles on its streets but is permitted to ticket them. Greg Sahd recommended contacting PA Senator Ryan Aument or Representative Dave Hickernell about the state's role.


The following information currently appears on the borough's website:

§ 207-33. Violations and penalties.
The police of the Borough of Columbia are authorized to arrest upon view and without warrant any person or persons violating this article, and the person or persons so violating shall be subject to a penalty as set forth in the Pennsylvania Vehicle Code.

PLEASE NO SELECTIVE ENFORCMENT , see where it got us with Mr Helms 20+ years . Why nothing on the mayors nextstore neighbor 4 foot + retaining wall/electric lites with no permit in the window.

It is a shame those little black boxes on the trunk of the police cars have the authorization to tow the cars. They are used to check for insurance, registration, wanted and warrants off the license plate. A non inspected vehicle can be just as dangerous then all of the above. Why in the heck is the Mayor contradicting a Council member when it should have been tabled for legislation to discuss changes in the codes.The car should be tagged abandoned and 48 hours to remove if not inspected on borough streets. Therefore the car will be impounded for a daily rate for storage. Not rocket science guys!

If these cars were on north 3rd street they would be towed with no warning.. your fine would be mailed to you.. when you call to talk the code enforcement officer.. you will not recieve a call back... selective enforcement or over use of "power" to issue fines you choses what u want to call it.. both are wrong!!

How is it that cars can be "booted," and removed, but these abandoned and dangerous ones (red Volkswagen) cannot be removed? The whole conversation was mind boggling.

Does he {the mayor} have blinders on when he's at home?

How about the towing of cars for snow emergency, how is that ok?

371 KINDERHOOK RD codes check it out.

Power in the argument , he is the mayor.

IF these cars were on south second street the neighborhood spy would call codes and they would be towed. Maybe you should all move to south second street where you're not allowed to have fun, fix up your property, or play music without a visit from the police or a code officer!

I saw that omg , SLECTIVE ENFORCMENT , Jeff Helms deal alright , that's a state rd they need a permit just to widen the drive , cutting the curb , and the wall it's self , a electrical inspection , water run off , no permit in window . yup THATS SLECTIVE ENFORCEMENT alright right under the mayor's nose.

Did the stand off between 320 s 2 nd st and the borough ever get fixed ?The gutter has big holes and no one fixes them , but they run the street sweeper over them every week , a new sweeper,nice.

Where do they get that they have no jurisdiction over abandoned vehicles on borough streets.. that it is a State issue? York City has ordinances on abandoned vehicles on left on the street and in back yards.. Back when I lived there they came out and chalk marked vehicles and I think given a warning... They then came back a few days later to see if they were moved. If they weren't your were ticketed.

On another note.. the code enforcers in this town are completely out of control.. Fining people for grass too high, without notice as required and ticketing people with trash bags in their back yard waiting to be put out for collection? Really?

They simply DO NOT CARE about that part of town! If they did they wouldn't have approved that stupid storage facility!

Exactly!!!! With the rain it is very hard to keep up with the grass! Just stop already!

Jeff Helm owns a house 1 house up the hill , what the hell is going on , mayor on one side , zoning officer one house up , these two over looking this should be criminal , they are sworn to up hold the law , it looks like a state attorney should get involved with this borough , and the question was never answered WHO IS IN CHARGE ? No more smoke and mirrors, it is out of control.

Must be Jeff Helm again , he must be afraid of someone there at 320 , so we just run the new street sweeper over it and spread the stone out on the street, beat the hell out of it and when it breaks down the tax payers pay to fix it. WHO IS IN CHARGE?

If the police or codes are visiting you then apparently something is wrong.

No they inspect homes , you don't have a choice , where have you been ?

In my quiet, up to codes home.

Get ready they will find something

Wait till someone falls and gets hurt at the holes in the gutter and sues the borough , what a smoke screen they will try to produce and then pay off.

The gutter is over 6 inches below the rest of the gutter, big hole ,

This is shamefull the codes does nothing , but they harass the rest of town #371 exstencive digging beside mayors house and no permit , and one house between a zoning officers house , he must be afraid of them.

Codes dept is just part of the borough , helm cover up , way no action on 371 kinderhook road ,beside mayor Lutz s home and 1 house between the digging and Jeff Helms one home , We were told it didn't matter who it is if they don't get a permit , they will be find, so whats up , been going on to long.

I live on a property and there's cars all over it and the town does nothing and we live right off 209 and u can see the garbage from road cars are sinking in the ground most of them still have gas and all there fluids in them. Animals are living in some they cleaned up half the tires then hid the rest behind a fence the landlords do nothing for the property. Would love to see how bad the grounds are here.