Events bring nationally-acclaimed program to Lancaster County for the first time, seek to share history of African-American slavery in Pennsylvania. 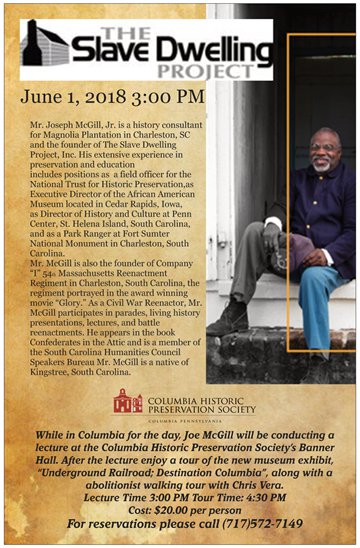 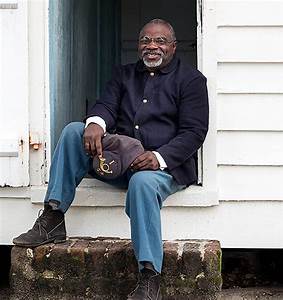 The Slave Dwelling Project, headed by Joseph McGill, is dedicated to preserving surviving African American slave dwellings and seeks to change the narrative around the history of slavery in the United States. McGill will co-host the Lancaster County events, which are open to the public. “Since 2010, the Slave Dwelling Project has spent nights in slave dwellings in 19 states and the District of Columbia. We are proud that Lancaster will be added to the portfolio in 2018,” said McGill. 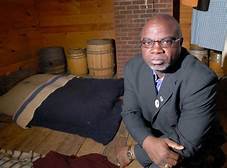 The two-day program kicks off on Friday, June 1, at 3 p.m. with a lecture by McGill in the Columbia Historic Preservation Society’s Banner Hall, followed by a tour of the new museum exhibit “Underground Railroad: Destination Columbia.” At 4:30 p.m., Chris Vera, president of the Columbia Historic Preservation Society, will lead a walking tour of abolitionist Columbia. The cost for these events is $20 per person. For reservations, call (717) 572-7149. 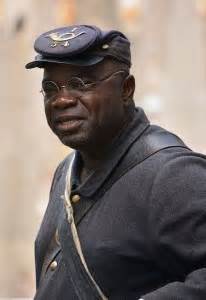 On Saturday morning, June 2, at 11:00 am, McGill will join Lancaster city council member Ismail Smith-Wade-El and other members of the Lancaster community for a public forum in Millersville University’s Ware Center. The 90-minute event will address the history of slavery in Lancaster and its present-day legacy. Admission is free. For more information call (717) 871- 7018.

At 2:00 pm on Saturday, June 2, McGill will accompany members of the African American Historical Society of South Central Pennsylvania, LancasterHistory.org, and others on a 90- minute walking tour of African American heritage sites in downtown Lancaster. The tour begins at the Lancaster City Visitor Center, 38 Penn Square, and covers 12 sites, including the grave of Thaddeus Stevens. The tour is open to the public; cost is $8 for adults, $7 for seniors (62 and older), $5 for college students, and $2 for youth (6-18). Children under 6 are free. For more information contact Randy Harris at (717) 808-2941 or Leroy Harris at (717) 224-7030.

The history of slavery and African American history in Lancaster County is not well known, and McGill’s visit provides a unique opportunity to share this story more broadly. Although Pennsylvania passed a gradual emancipation law in 1780, African Americans were not freed under the law until 1808, and many remained in bondage for years afterward. Meanwhile, African Americans fleeing slavery in the South were often imprisoned in the downtown Lancaster jail, and slave hunters regularly came to Lancaster County in search of runaways. Columbia and Lancaster were both sites of important Underground Railroad activity, and the city will soon install four permanent historical markers commemorating this history.

“Hosting the Slave Dwelling Project in Columbia and Lancaster gives us a wonderful chance to highlight the complicated history of enslaved people in Lancaster County, but beyond that, these programs will foster discussion, learning and hopefully a better understanding of this essential American story,” said Chris Vera, president of the Columbia Historic Preservation Society.

“It is our hope Mr. McGill’s visit and the Lancaster County Slave Dwelling events will serve as a catalyst to ignite interest around the unique African American history of Lancaster, and the importance of preserving the structures that tell that important story,” said Leroy Hopkins, president of the African American Historical Society of South Central Pennsylvania. “We believe these events will bring to life a history too often ignored.”

More information on The Slave Dwelling Project can be found at: slavedwellingproject.org.