Shirley A. Meley, lifelong Columbian, touched the lives of many 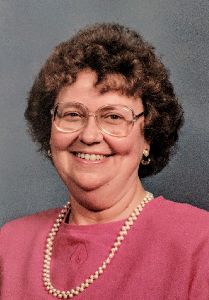 Shirley A. Meley, a lifelong resident of Columbia, PA passed peacefully on Wednesday, May 2, 2018 after a lengthy illness. She was born August 13, 1935, to the late Kathryn Miller Rupp and late step-father Carl F. Rupp. She is survived by her husband, the love of her life, William N. Meley, who she met in tenth grade homeroom and spent the next sixty-eight years with.

She leaves five children and their families to mourn: Nicholas & Christine (Gerfin), Anthony & Deb (Haldeman), Gregory, Kathleen, and Patricia. She adored her grandchildren: Amy (Ben), Dominic (Jess), Vincent, Margaret, and Elizabeth. And she was blessed to be an integral part of her great-grandchildren's lives: Caedan, Julian, Gianna, Oliver and Oscar. She was predeceased by her beloved grandson Brendan.

She is survived by her three sisters: Carla (Walter) Petroski, Corinne (Dan) Ritz, and Christina (Marty) Zeamer, and her brothers-in-law: Joe (Holly) Mele, James (Jennifer) Meley, and Patrick Meley, as well as numerous nieces, nephews, and cousins. She was also predeceased by her cherished parents-in-law, Nicholas & Margaret Meley, and brother-in-law Laurence Meley.

She was a lifelong learner and a passionate teacher, graduating as class valedictorian from Columbia High School, Class of 1953, while winning awards and scholarships as best student in science, mathematics, Latin and English. While working and raising her children, she earned both her BS in education and MS as a reading specialist and educational administrator from Millersville University. Her decades-long teaching career began in 1965 at the recently opened St. Leo the Great School in Rohrerstown (before the windows were even installed!), but her love of helping others achieve their academic goals began in first grade when she tutored her fellow students in reading, and continued through her high school years as she helped many classmates improve their grades and fulfill their potential.

In 1970 she began teaching fourth grade at Holy Trinity School in Columbia and became the school's first lay principal in 1983, spending the next fifteen years in a position she relished, until she retired in 1998. She cared deeply for the well-being of the hundreds of students whose minds and hearts she touched, and she liked nothing better than hearing from former students and celebrating their achievements. In a commemorative book presented to her upon her retirement, student after student described her as compassionate, generous of spirit, warm, and always available with comfort, a smile or a hug. Her love of teaching, and the grace with which she performed her duties as an educator, inspired a number of her students to become teachers themselves, some of whom she later hired to teach at Holy Trinity.

She was an active member of Holy Trinity Catholic Church, serving as a CCD teacher, an extraordinary minister, a Pre-Cana counselor, a lector, a member of the Altar Rosary Society, and a member of the HT Mother's Club. She served on the Lancaster County Youth Aid Panel, counseling first-time juvenile offenders from Columbia Borough, describing it as one of the most fulfilling experiences she ever had.

Possessing a generous heart and always championing the under-dog, she was an unflinching warrior for social justice, an early advocate for tolerance and cultural diversity, and she embraced interactions with folks from all walks of life, knowing each encounter enriched her life.

A former Girl Scout, she continued her love of scouting by serving as a Den Mother for the Cub Scouts. She was an excellent seamstress, sewing everything from gowns for girls in her family to celebrate the 1963 Civil War Centennial, to Barbie Doll clothes, to surfer swimming trunks for her sons. She was an excellent cook, preparing family recipes, from PA Dutch cooking to Italian cuisine, and her potato salad was legendary. She was also an exceptional baker, known for her perfect pie crusts and her cookies. At Christmas, she baked dozens of different kinds of cookies, making sure everyone's favorite was available. She collected angel figurines, many of which were gifts from her former students.

Each day and especially on Sunday, she completed her New York Times crossword puzzle. In addition to her love for all of God's children, she also loved all the dogs in her life and was caught on a number of occasions singing "Gene's a Yankee-Doodle-Doggie"!

A Mass of Christian Burial will be held at Holy Trinity Catholic Church, 409 Cherry St., Columbia, PA 17512 on Wednesday, May 9, 2018 promptly at 10:00 a.m. with the Rev. Stephen P. Kelley, Celebrant. Interment will follow in Holy Trinity Catholic Cemetery. Family and friends may view at the Clyde W. Kraft Funeral Home, Inc., 519 Walnut St., Columbia, PA on Tuesday evening from 6:00 p.m. until 8:00 p.m. (Recitation of the Holy Rosary at 7:30 p.m.) and again on Wednesday from 9:00 a.m. until 9:45 a.m. at the church. The community is invited to attend a fellowship luncheon at the Knights of Columbus, Fourth and Maple Sts., Columbia, PA following the interment.

Donations in Shirley's memory in lieu of flowers may be made to the Brendan W. Meley Memorial Award, c/o Thaddeus Stevens Foundation, 750 E. King St,. Lancaster, PA 17602 or to the St. Vincent de Paul Society, c/o of Holy Trinity Catholic Church at the above address. Please add Shirley A. Meley on memo line.
Posted by Joe Lintner at 7:33 AM

Nick and family i am so sorry for your loss your Mom and Mrs. Stephenson were my very favorite teachers I visited her alot when she lived on Chestnut St will be at the services