"Sitting on a sofa on a Sunday afternoon
Going to the candidates' debate
Laugh about it, shout about it
When you've got to choose
Every way you look at this you lose"
("Mrs. Robinson" by Paul Simon)

It's spring, and politics is in the air. May 15th's primary election will decide the candidate from each party, who will then run against each other in the fall. The winner will rule over the newly formed 11th Congressional District, which includes Lancaster County and southern York County.

On Monday night, April 30, the two Republican candidates, incumbent Congressman Lloyd Smucker and challenger Chet Beiler, squared off for a debate at Columbia High School. The event was sponsored by LNP. 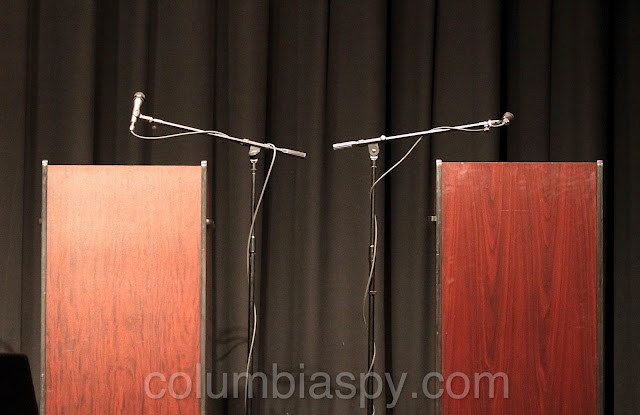 Citizens filed into the auditorium. Although the event was open to the general public and not just Columbians, the room was less than half full during the debate. 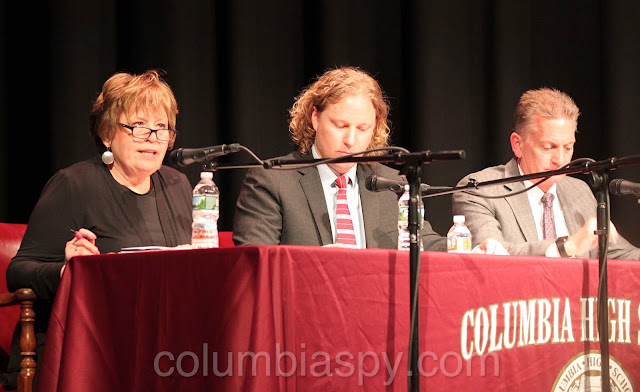 At the meeting's outset, Barbara Hough Roda (left), media liaison for LNP and Lancaster Online, told the audience that no photos or recordings of the forum would be permitted. (Columbia Spy took photos and audio-recorded the meeting.) Her directive was surprising, considering LNP purports to back freedom of the press. Roda was joined at the moderators' table by Kevin Schreiber (center), president and CEO of the York County Economic Alliance, and Tom Baldrige, president and CEO of the Lancaster Chamber of Commerce and Industry. 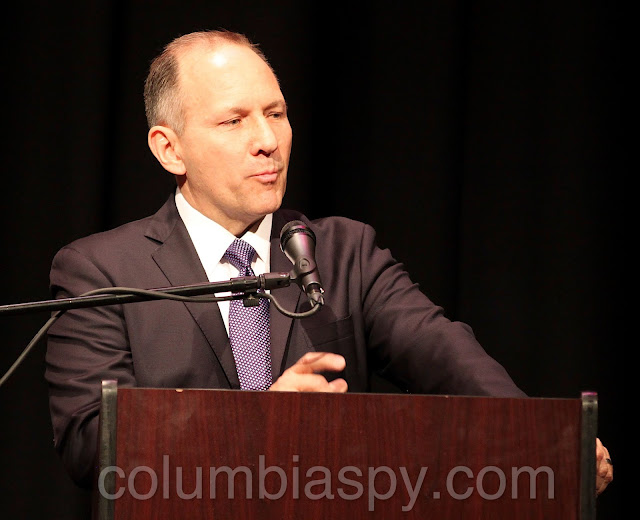 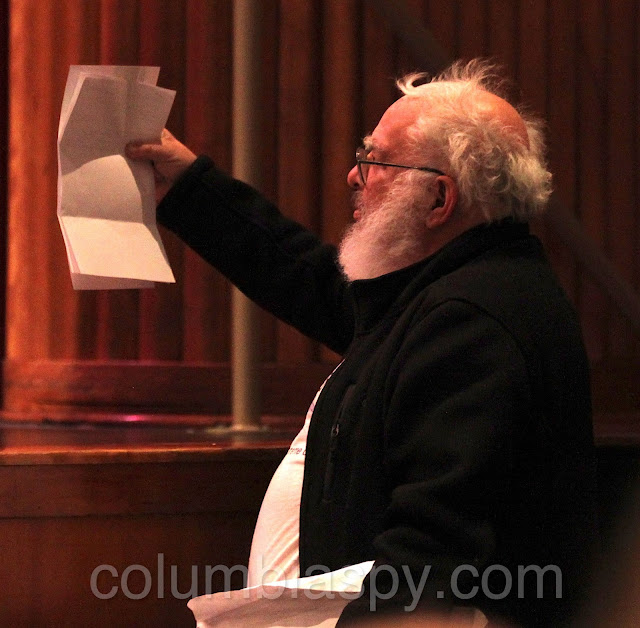 A little later, an apparently aggrieved audience member approached the candidates - unexpectedly and loudly - before being escorted back to his seat. 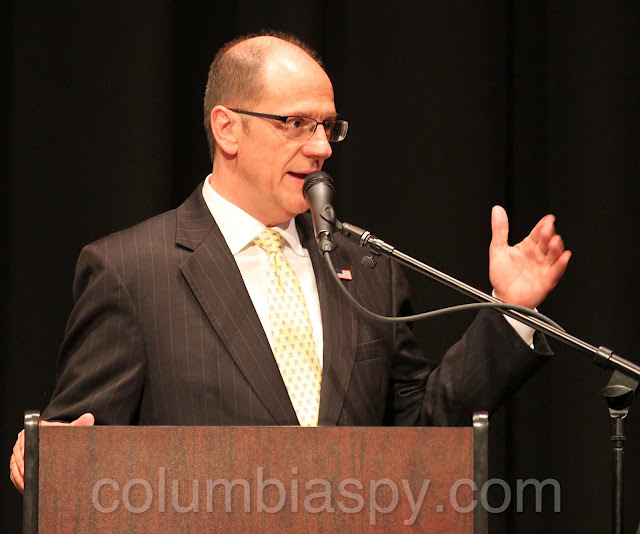 Beiler assured the man he would discuss the issue with him afterwards. During the debate, Beiler also accused Smucker of dodging constituents, a charge Smucker denied. 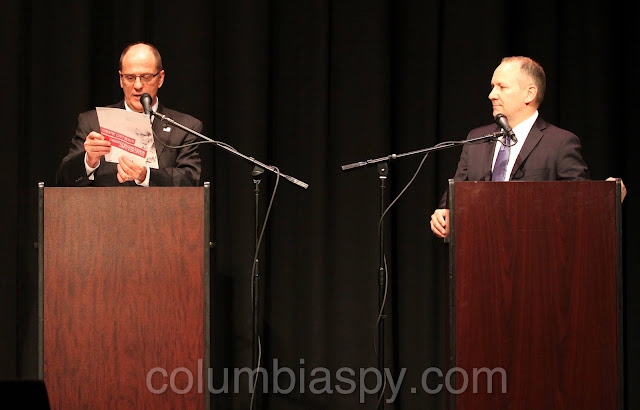 Beiler held up several examples of negative mailings attacking him and asked Smucker what he knew about them. Smucker denied knowledge of the mailings, eliciting groans from the audience. 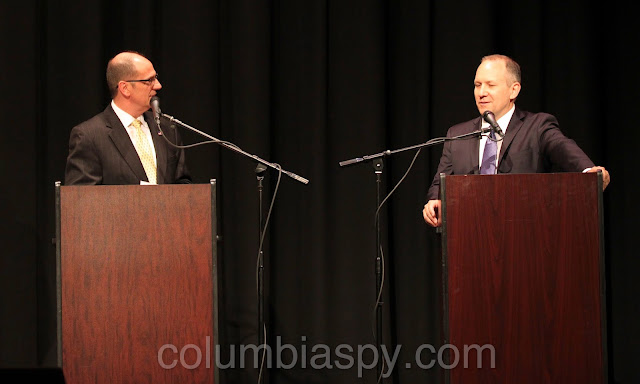 Asked if he condemned the mailings, Smucker sidestepped and did not answer the question directly. The candidates also argued over who is more conservative. 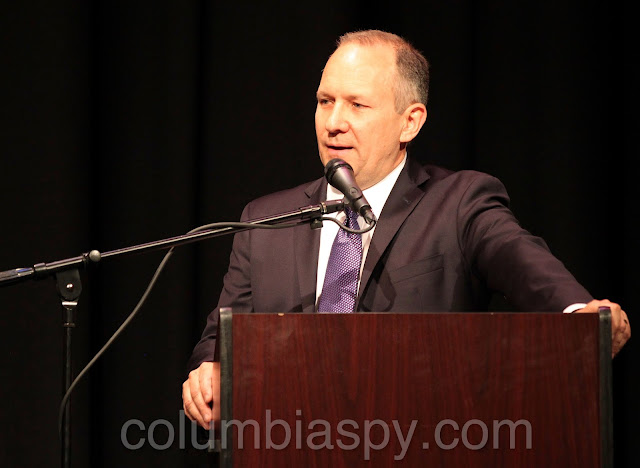 Smucker said he voted in line with President Trump 96% of the time and that he has an A+ rating from the NRA. He also said Trump “has the chance of being one of the great presidents in the history of our country.” 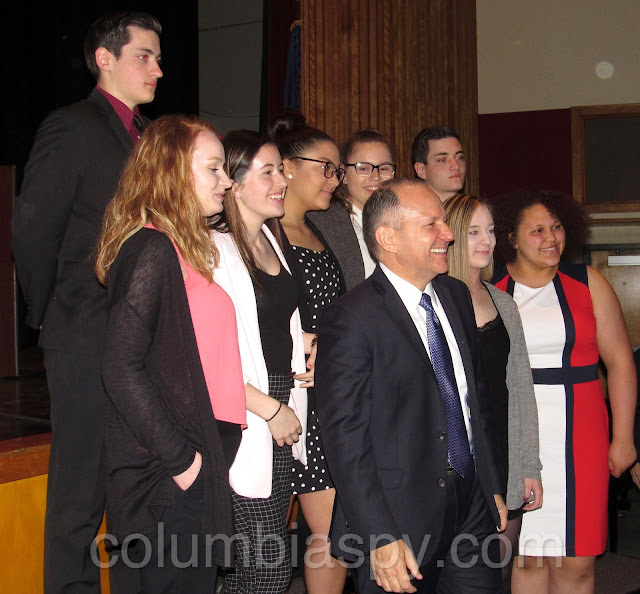 After the debate, Smucker took advantage of a photo-op with students... 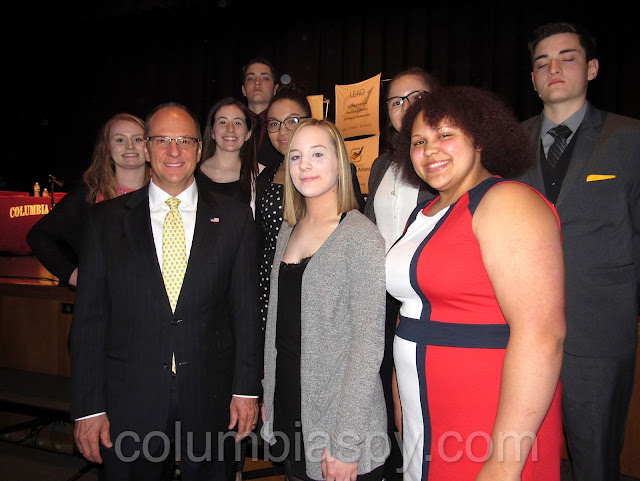 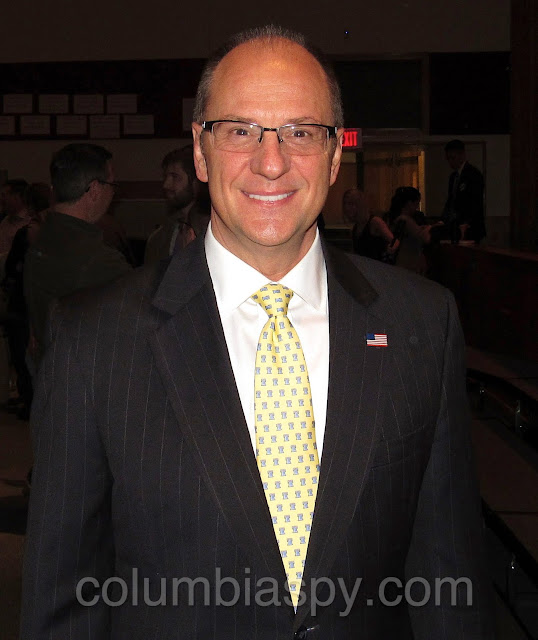 Beiler also consented to a photograph at Columbia Spy's request. We were unable to catch up with Smucker. 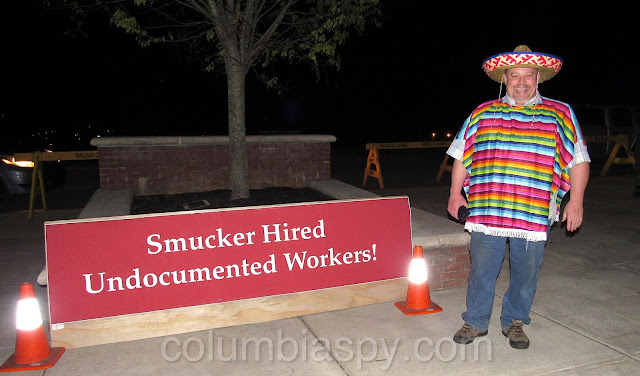 After the debate, local political activist Ron Harper set up outside with this sign accusing Smucker of hiring undocumented workers to work at his business.

Harper lays out his case in this 2016 video:

In a recent editorial, Lancaster Online, without substantiation, associated Harper with the Beiler campaign, a charge Harper denied in a comment following the editorial in which he also reiterated his claim about Smucker: 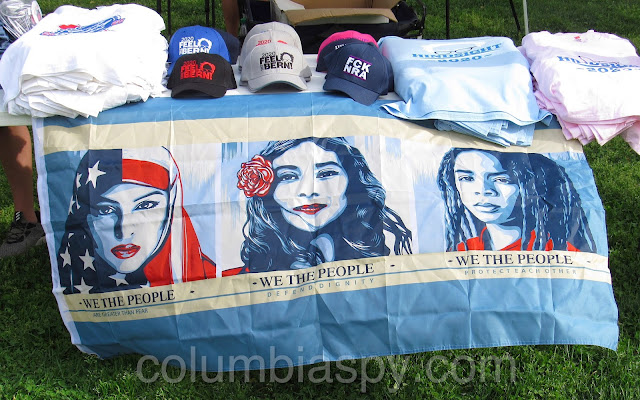 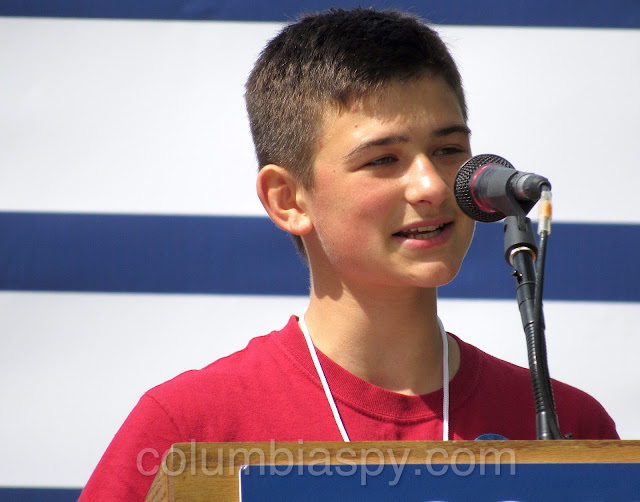 16-year-old Ashton Clatterbuck, a junior at Lancaster Mennonite High School, offered remarks. His parents, Mark and Malinda, are founders of the anti-pipeline group "Lancaster Against Pipelines." 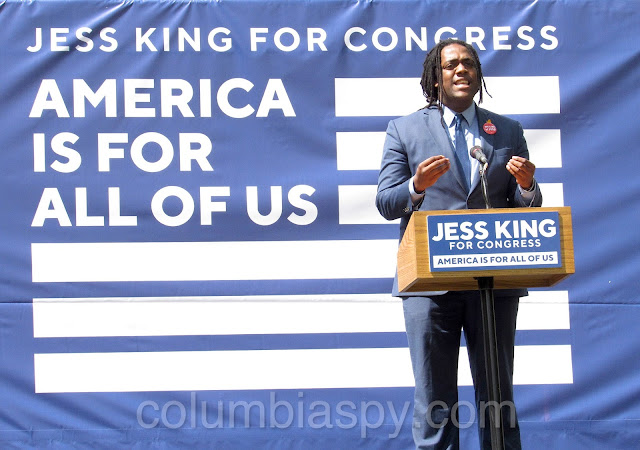 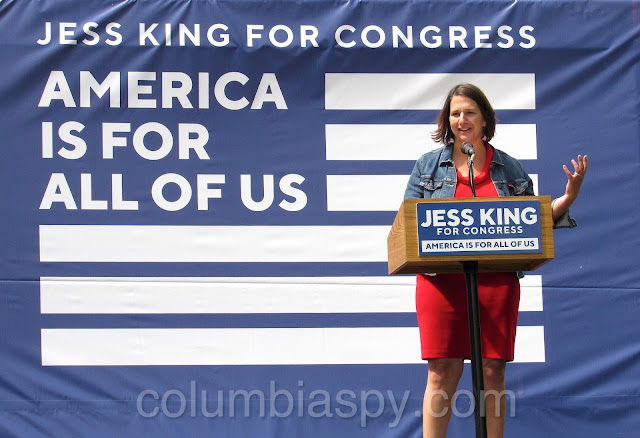 King laid out the main points of her platform: providing Medicare for all, increasing the minimum wage, enacting common sense gun safety regulations, and offering debt-free public college, among others. 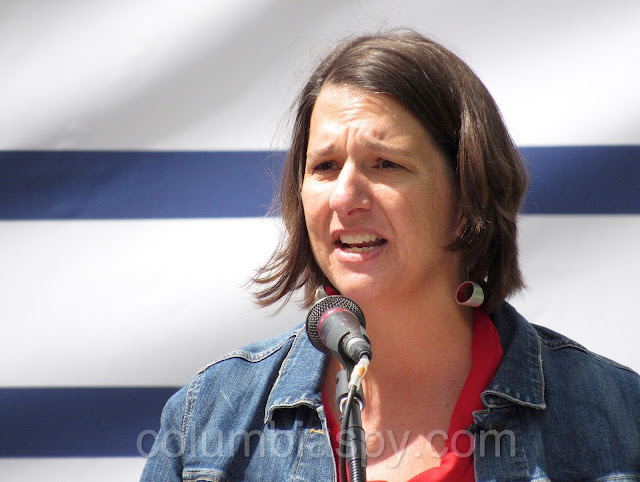 King cited her Mennonite heritage and that of her relatives, Republicans Smucker and Beiler, but distanced herself from their policies. King is running unopposed in the primary. 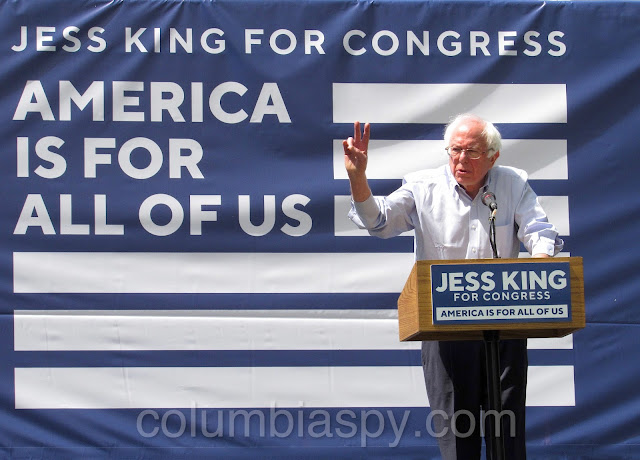 Bernie Sanders took the stage and announced his support for King. 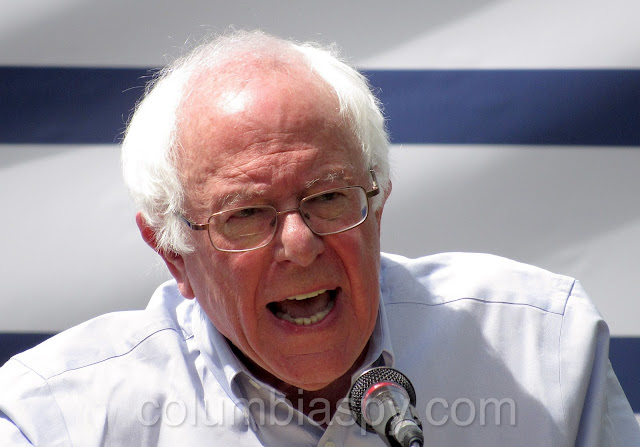 "We need Jess because her vision of America is a very different vision than the Republican leadership and Donald Trump, who now control our government,” Sanders told the crowd. 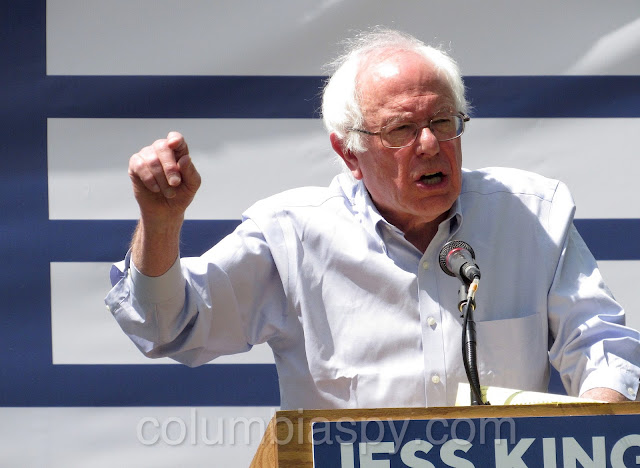 Sanders spoke for 20 minutes to the gathering of about 2,000. 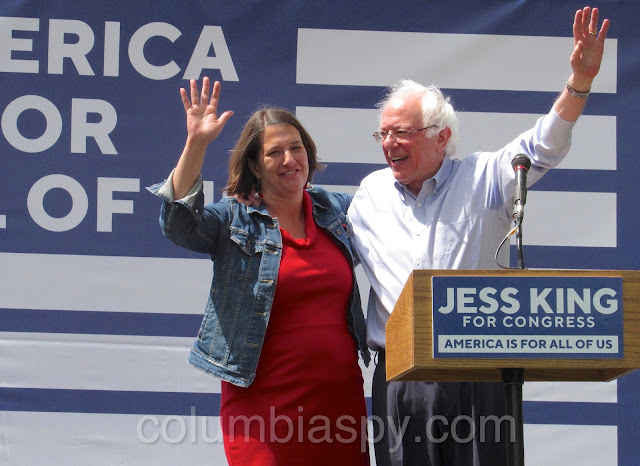 Sanders appeared with King again near rally's end before leaving the stage to walk among attendees and shake hands. 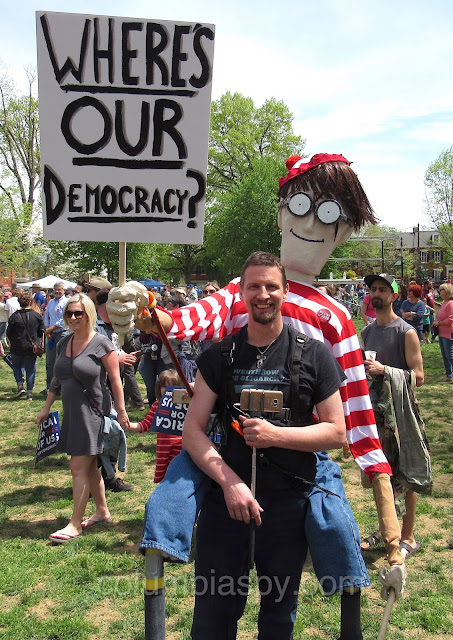 The "Where's Waldo?" character was among the crowd, repurposed to deliver a political message. 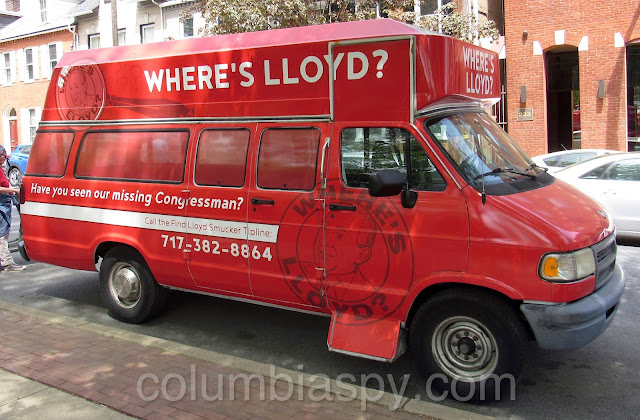 This van belonging to "Lancaster Stands Up," a local grassroots organization, was parked near Musser Park. Some constituents believe Congressman Smucker has been elusive and reluctant to hold town halls. 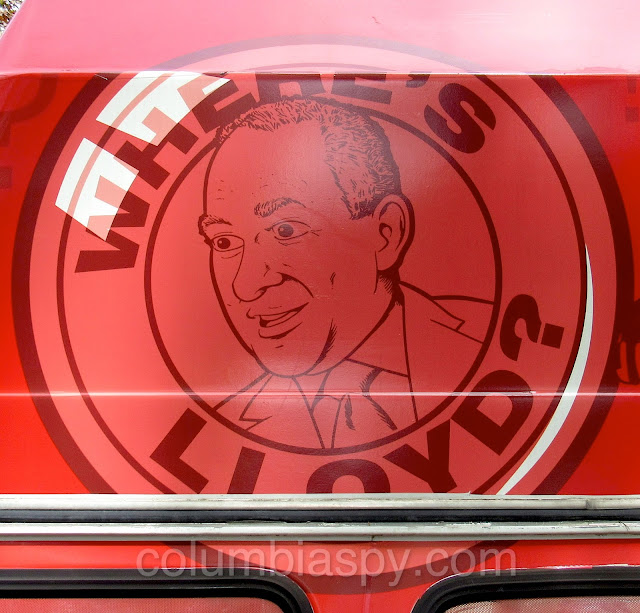