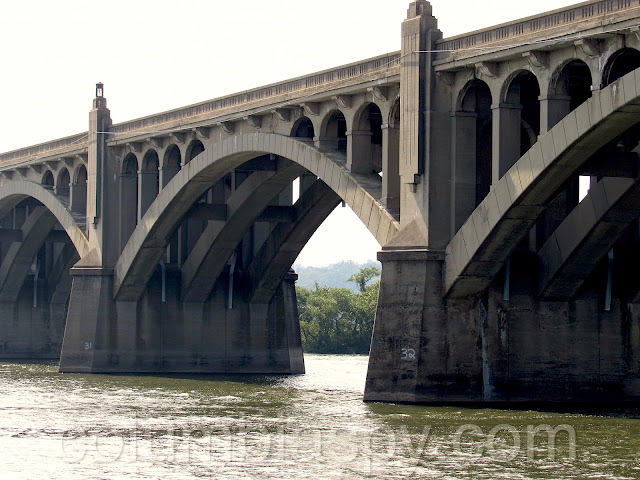 The Veterans Memorial Bridge rehabilitation project will start a few years later than originally announced, according to information recently received from PennDOT by Columbia Spy. In an April 13 letter, PennDOT spokesman Mark Malhenzie said bridge construction won't begin until 2022 at the earliest, because the project is only now in its beginning stage. This date contradicts the timeline provided by Mayor Leo Lutz at last month's Columbia Borough Safety Committee meeting, where he announced that the bridge could be shut down in 2020-21 for construction. Optimistic estimates now put the project's completion date at 2025, possibly even into 2026.


According to Malhenzie, initial planning phases will begin in a few months and will take several years to complete. The project will bid out to a contractor in January 2022 at the earliest, and actual construction is expected to take more than three years, due to the bridge's length and unique character. Much of that work timeline, however, will not have any significant effect on traffic, and two lanes will be open as much as possible, especially when work is being done on the underside.

A limited full closure of the bridge is being considered as the most efficient way to perform key work stages, in which case, traffic would be detoured to Route 30. Incident management plans would be developed and coordinated with key local/county/state EMS services, and innovative techniques to reduce the risk of incidents on Route 30 and limit their impact will also need to be implemented. More public involvement will occur in the future to allow feedback and to provide further information.

does this mean the front street fire build won't be sold till 2026?

Most likely the building will just cost tax payers, Columbia has to much tax money or they(council) wood not throw it away like they do.

Thanks Cole! Good to know!

With all the people working in the borough why can't one of them fix or call and have the web sight fixed, mayor wants to know what makes Columbia look bad,such as the Lancaster news paper,why don'tlook at there web sight? LOOKING BAD UNDERSTATMENT!!!!

They don't want any body to know whats going on..