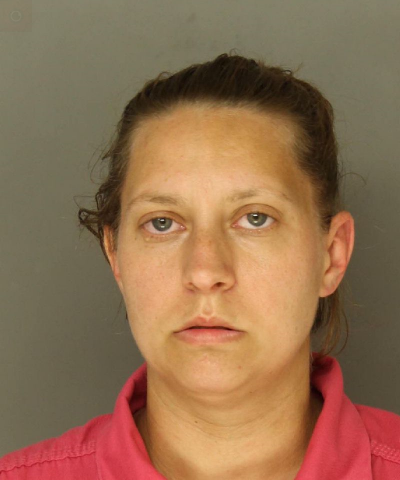 Heather Lynn Schaeffer
On 04-05-18 at approx. 5:12PM the Columbia Borough Police were called to a domestic dispute in the 600 blk. of Lancaster Ave. During the investigation police learned that Heather Lynn Schaeffer (30) of Columbia was a passenger in a motor vehicle and did grab the steering wheel of the vehicle while it was in motion steering it into the oncoming traffic lane. Three (3) children were in the vehicle at the time. When the driver attempted to regain control of the vehicle, Schaeffer grabbed the driver by her hair and neck, forcing the driver onto the passenger side of the vehicle. Schaeffer then began to punch the driver in the face smashing her glasses and causing injuries to the driver.
When officer attempted to take Schaeffer into custody she attempted to kick an officer and flailed her body. Once taken into custody Schaeffer did spit in the face of another officer while being placed into the police vehicle.
Schaeffer was charged with one count of Simple Assault (Domestic Violence Related), one count of Strangulation, one count of Terroristic Threats, one count of Aggravated Harassment by Prisoner, one count of Recklessly Endangering Another Person, three counts of Endangering Welfare of Children and one count of Resisting Arrest.
Schaeffer was arraigned before MDJ Chudzik and committed to Lancaster County Prison on $50,000 bail.
Arrest Date:
Thursday, April 5, 2018
Case Number:
5498-04-05-18

https://lancaster.crimewatchpa.com/columbiapd/10552/arrests/schaeffer-heather-lynn-simple-assault-domestic-violence-related-and-6-additional
Posted by Joe Lintner at 6:25 AM

Great job, for arresting this trash! Now to everyone that talks bad about police how would you like to have someone spit in your face, and have to act professional once it happened?? Think about the crap they have to deal with day after day!!!

Hopefully this is not home grown Columbia.

Amen. and with the craziness out there, they NEVER know what the hell they're walking into to. YES i know they signed up for it but theres too much hate going on