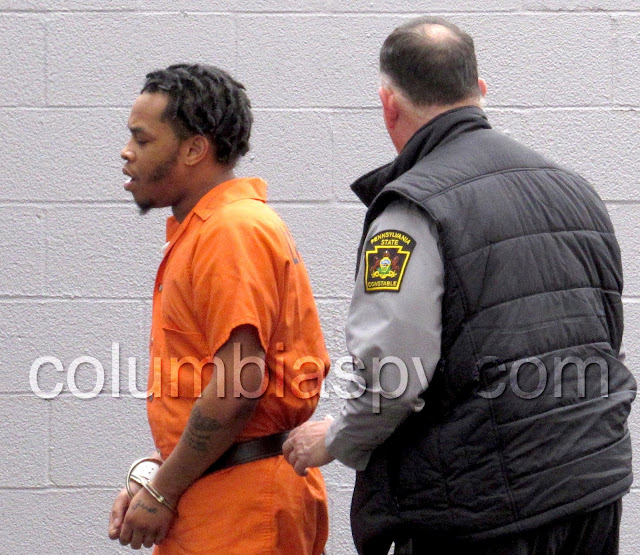 Randy Howard is escorted into District Judge Miles Bixler's office this afternoon for a preliminary hearing. Howard is charged in connection with an assault on a Columbia man last September.

Randy Howard accepted a plea deal of 6 to 12 years at a preliminary hearing at District Judge Miles Bixler’s office in Columbia today. The deal allows Howard to avoid a trial. He will be sentenced at a formal arraignment later this month. Howard could have faced 10 to 20 years if he had not accepted the deal, which was offered by Assistant District Attorney Andrew Gonzalez. Howard still has the option to reject the deal before sentencing.

Howard is charged with aggravated assault and criminal conspiracy in connection with the September 3, 2017 wolfpack attack on a Columbia man on the 600 block of Walnut Street. He was apprehended in Columbia on March 15 by Columbia Borough and West Hempfield Township police. Shakim McIlwain was convicted last month for his part in the attack.

Howard will also do time for a parole violation stemming from a previous crime, to be served consecutively.
Posted by Joe Lintner at 4:38 PM

This is excellent news! Thank you for keeping the town informed on this!

So glad he’s put away but not long enough. Give him the same beating that he did . Problem is now we the tax payers have to pay to keep this scum

Who will be responsible for all the medical bills?

Neither of them 2 losers, there gonna take the free ride.. pathetic trash..

Some people are more afraid of a camera than they are of the consequences of criminal activity. Those in Howard's corner did not learn a lesson. Threatening the "old bitch" who took the picture. Taking a picture is legal, beating someone is illegal. Call me any name you want, I'll be calling you incarcerated. Laker Nation.

When will there be an arrest of those that helped Randy Howard hide for half a year?

The charge would probably be "accessory after the fact."