The mystery of the wrecked police car SOLVED (Sort of) 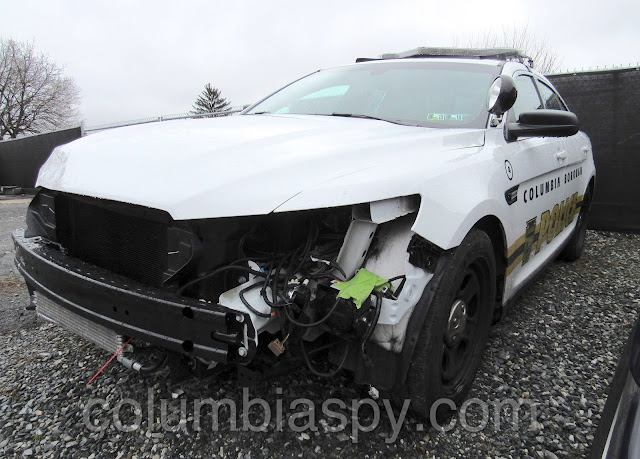 A Columbia Borough police cruiser has been sitting at the Midway Collision Shop since last month.

During the citizens' comment section of Monday's Columbia Borough Council meeting, former councilman Frank Doutrich asked council for information about a wrecked police cruiser (currently sitting at the Midway Collision Shop on Lancaster Avenue, where it's been since last month). Mayor Leo Lutz responded in the following exchange:


Doutrich: " I understand there's a wrecked police car. What can you tell me about it?"

Lutz: "The officer was involved in an accident. It's being repaired."

Doutrich: "What happened? Anybody know how it was involved? Somebody hit it? It hit somebody?"

Lutz: "The officer hit somebody, going out of the alley, responding to a call."

(Columbia Spy spotted the cruiser sitting at Midway Collision yesterday.  It had been moved from its previous position.) 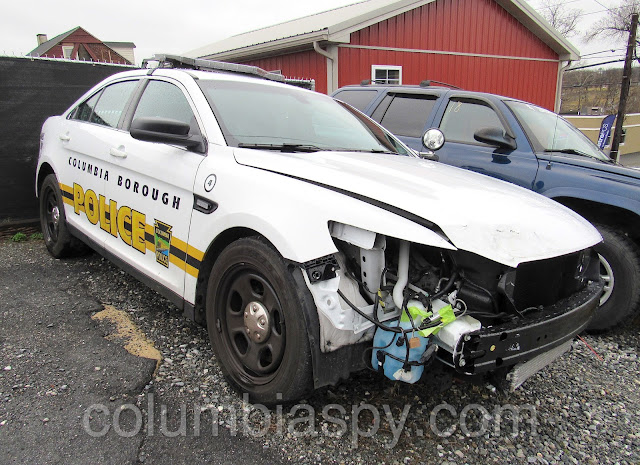 The cruiser sustained front-end damage in a traffic accident.
Posted by Joe Lintner at 9:52 AM

You know when I worked in the private sector for a company as a sales person, I drove my own vehicle. I was involved in an accident ONCE and was required to have a blood test taken for drugs/alcohol, without cause as the accident was not my fault. Why is this not policy for working in the public sector, while driving taxpayers vehicles?

Let alone the big secret about where and how??? Obviously this shows the secrets in this town, and lutz giving the childish obvious answers, is pathetic!!!!!!!

BACK DOOR BOROUGH AND THE MAYORS RIGHT AT THE TOP!

How is the officer? Think that is important!

Was he or she in the car?? We dont know!!! Remember nobody is talking about it!!

"Complaining" about a wrecked police car? You're damn right! This police department has wrecked enough. We're paying for them, especially considering that most were the officers fault. You think it's ok for them to run into other innocent drivers? Are you comfortable paying if your teenage kids keep wrecking cars into other drivers? No different, you pay either way.

My daughter had an accident not long ago in a similar situation. It is NOT EASY to see when pulling out of alleys and side streets in Columbia. It seems that every intersection just has to have a pickup or large SUV parked right at the corners and nobody can see to pull out safely. Sometimes it's best to give a light toot of the horn for pedestrians on the sidewalks because of homes being right up against the sides of the alleys. Have a little mercy on the officer - it could be YOU next time.

As for Mayor Lutz, remember the condition of the borough and its streets before he came into office. He's not perfect (he is human), but he's done a lot of good, which is more than I can say for most government official in recent years.

WHAT has he done. he has nothing to do with the condition of our streets, he has hired a lot of police officers that dont do a lot for this small town look around there are double parked cars when their are parking spaces right next to them ,parking to close to an intersection,stopsigns,firehydernts there is no more police dog. but they say we have a high drug rate so theel me what good does he DO

he should have in 17 years

WHAT IF ANY BOROUGH OFFICALS/EMPLOEES,HAVE TO LIVE HERE?

Check out Leo's parking on 3rd ,law says 20 feet from cross walk,he is sometimes 3 feet from it. LEAD BY EXAMPLE MAYOR.

DO AS HE SAYS NOT AS HE DOES.

Maybe they don't want anybody to know this,you know smoke and mirrors.

As for the police dog ,Columbia had one of the best handlers in the state but the mayor took it from him.

THEY ALSO HAD A COMMITY THAT FUNDED THE DOG TILL THE MAYOR PULLED OUT THE RUG, AT THAT TIME THEY HAD 50,000 DOLLARS IN A ACCOUNT THAT THEY DONATED TO OTHER POLICE DEPTS THAT HAD DOGS.

Thank you mayor this is a dumb move,maybe you can go out and sniff out drugs on traffic stops, or go in and clear a building that's being robbed,we hope there's no gun like the robbery behind turkey hill as you stated,wait there was a gun,woops(FAKE NEWS ON YOUR STATEMENT)

Why on the borough website when they finial post what is supposed to be minutes it comes up agenda,it takes at least 30 days and they don,t post minutes,there is more people working in the office than ever before. Maybe the assestane manager or mayors assestane should keep this up to date.

TOP SECRET IT MUST BE FILTERED FRIST.

What does the chief of police have to say? (or the #2COP being the mayor is the so called#1)

Please use spell check and re-read your comments before you post. This is ridiculous!