Resident asks why Columbia doesn't have a police dog 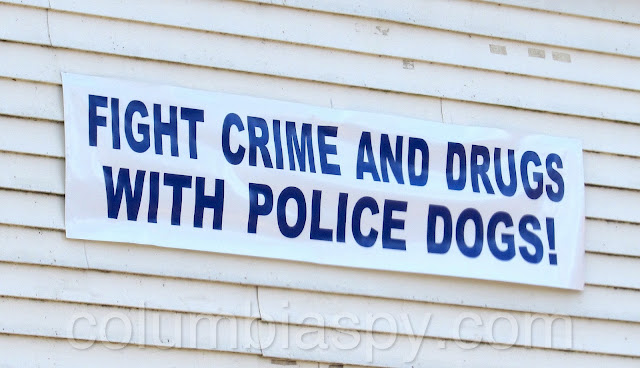 Frank Doutrich posted a banner on his 9th Street property about Columbia's need for a police dog.

"I never heard it from the chief, why we don't have a police dog. I'm tired of hearing, 'It's the kids.'" Doutrich said, referring to the mayor's stated concern about the dog intimidating children. "Isn't there kids in any of these other municipalities?"

Lutz replied, "But they're not using the dogs on the kids like you suggested."

Doutrich accused the mayor of being political about the issue. Lutz denied the claim and said the issue is about liability.

According to a February 26, 2014 LancasterOnline article, the issue was visited in a heated back-and-forth at that month's borough council meeting. At the meeting, Lutz said the reason for discontinuing the K-9 was due to the officer's concern about having a dog in his home that is trained to bite. One council member said he had spoken to the officer and Lutz's assertion was incorrect. According to the article, Lutz said that a second officer considered taking on the role of handler but was also concerned about having such a dog in his home.

In a comment following the article, a Columbia resident stated, in part: "Seems as though someone is hiding something and now the Borough is without an asset in its crime fighting arsenal. The lack of a handler is pure balderdash."

I can understand why not to have a Police Dog, why the expense, every one complains about wasted money, this is one, West Hempfield has dogs and officers in the High School at Hempfiel all the time. We rely on them all the time, let them have the expense.

Over $7,000 dollars was raised, so some people did not think it to be a waste of money. Did those that donated get their money back? After all it was collected for a K-9 in Columbia Borough. Not any other borough. Where's the money?

Folks please attend the meetings and get the facts. See the lies that come out of the Mayors mouth.

Money WAS INDEED raised and it was stated at a Boro meeting that the funding went to another township, because Columbia did not have an officer that would take on the responsibility of training/housing a dog. It was then asked why the officer who has the dog, that was paid for by the Borough of Columbia, could not come to town for searches and other investigations. That question, to my knowledge, was not answered.

Why does the mayor lie so much office Mann had a k9 campaign that paid for the dog,and all the food,vet care,accesories,and even the markings,and up grades to the police car! The commity had over $50,000 in the bank to use, but the mayor refused and left Columbia with out a dog! THANK YOU MAYOR maybe people should have pulled the rug on your (pet) river park money pit!

I agree people should pack the meetings and find out first hand what goes on there. Very few attend. Frank is not popular there because he asks questions concerning about what's going on in our town. He should be on boro council.

I don't believe the comments about the dog trained to bite. If the dog is trained properly there is no issue, K-9 trained only bite/attack on command. I have first hand experience, i have a family member who is a K-9 officer. I have been out with him and other K-9 handlers. I would trust those dogs. Properly trained dogs know the difference. Even off duty, they don't do anything without command. So what's the real story Leo?????

This mayor is full of sh--. he should be the one clearing houses that the dog would have,he says he is the # 1 cop so put your body where your month is LEO. He has been wearing a police coat, now stand up to it and protect your citizens and stop the bleading of tax payers money!!!!!!Who needs more river park? CUT OUR TAXES,STOP THE BLEADING OF OUR MONEY!

Okay Mr. Mayor, tell us why you didn't want Off. Mann as K-9 handler? Could it be simply you didn't care for HIM as an officer? Then when Off. Keyser got a K-9, tell us why it was sent back? It had nothing to do with family, rather you didn't want a real police dog. And the program was self funded. It went away because it wasn't Leo's idea and it was too successful for him and he couldn't take credit for it.

WE WHO PUT OUR MONEY- HARD EARNED MONEY WHERE OUR MOULTH IS KNOW THERE IS A NEED FOR A DOG HERE! WE HAD THAT, I DO KNOW THERE ARE PERSONAL ISSUES THAT SOME OF THE PEOPLE WHO ARE IN POSITIONS OF POWER USE TO GET TO WHO EVER QUESTIONS THEIR ACTIONS OR LACK OF ACTION. SMALL TOWN, TRY THIS IN LANCASTER CHARGES WOULD BE BROUGHT . WHY DID THE K9 UNIT NOT GIVE ALL DONATIONS FROM THAT YEAR BACK TO THOES WHO COULD HAVE USED IT TO PUT IN TO PROPERTY TAXES ? TAX IS RAISED AND WE HAVE LESS INFORCEMENT. ONE K9 IS ALL IT TAKES TO MAKE THE DRUG TRADE THINK TWICE ABOUT STANDING ON OUR STREETS, ONE OFFICER IN A CAR RIDES RITE ON BY AND NO FEAR IS FELT ! SO NO MISUNDERSTANDING WE NEED A DOG. IT ALL DEPENDS ON WHO YOU ARE OR WHO THEY THINK YOU ARE YOU WILL BECOME A TARGET IF YOU ASK QUESTIONS ASK SAM REMEMBER THE MANAGER WHO COULD NOT HELP TURN COLUMBIA AROUND FROM THEIR 1700 WAYS OF LACK OF GOVERMENT. I KNOW THERE WILL BE THOES WHO SAY - JUST MOVE OUT OF COLUMBIA, THAT IS THE EASY WAY OUT. WHAT ABOUT THE PEOPLE WHO HAVE BEEN HERE ALL THEIR LIFE THEY ARE NOT THE PROBLEM THEY ARE SOME OF THE TAX PAYERS. FORGIVE THE SPELLING GRAMER ANY OTHER THING TO PICK ON.

Thanks to Frank for not fearing to ask.

Frank was on council years ago. He knows what's going on.

Why can't the mayor just tell the people who elected him the TRUTH, come on it,s going to come out anyway.We all can get more done working together, borough should be transparent!

Funny when officer Mann had the dog at the hambones kids were petting the killer dog , the mayor just couldn't take credit for the dogs and handlers work.