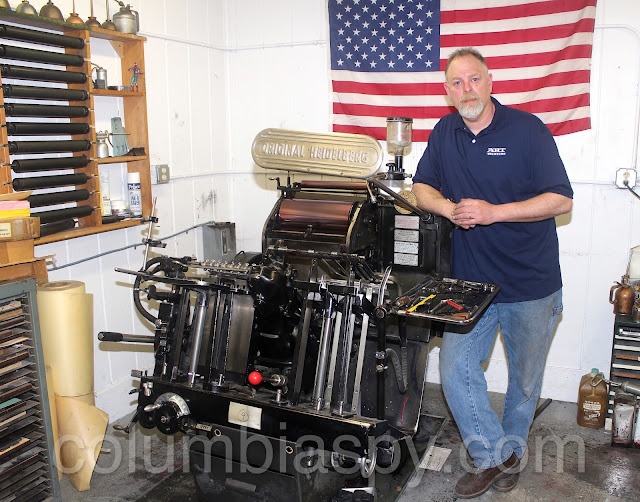 Chris Raudabaugh, owner of Art Printing, stands in his shop with an original Heidelberg letterpress machine, also known as a Heidelberg "windmill."


Chris Raudabaugh needed more space for his printing operation, and he found it in Columbia. He bought the building at 131 Locust Street where S & G Printing once operated, and ended up with a double bonus: a piece of Columbia history and a connection to the Underground Railroad. 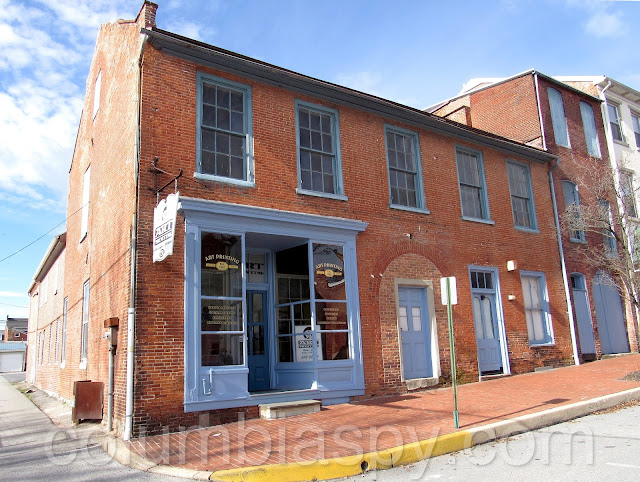 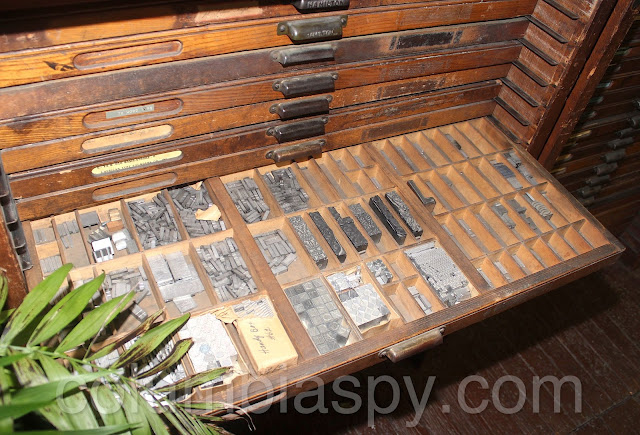 
Raudabaugh, a printer by trade, bought the building last year and moved his operation, presses and all, over the July 4th weekend. He was up and running the following Monday. Unfortunately, there were a few snags along the way - a leaky roof and a lightning strike that blew off bricks on the Bank Avenue side of the building last August. A new roof was installed and repairs were made, and Raudabaugh continued turning out all manner of printed products on an array of letterpress, offset, and digital printing machines from his shop, Art Printing. 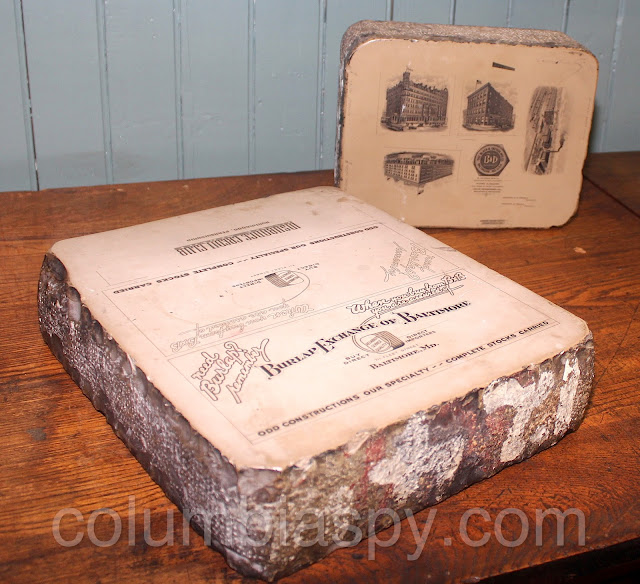 Litho stones used in printing are on display at the front office.


Raudabaugh says the business began in 1922 in a shop on King Street in Lancaster, near Ganse Apothecary, but moved to “Cabbage Hill” in 1972. After a few decades there, however, the area became something of a bad fit, because it was a changing residential neighborhood. In search of a suitable venue, he decided on the move to Columbia and found the larger building here afforded him a lot more space (more than 10,000 square feet). “I treasure this place,” he said. 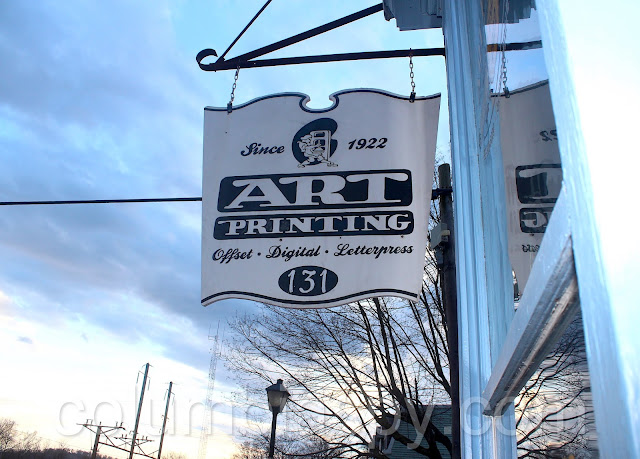 A business sign hangs at the entrance to Art Printing.

Raudabaugh began his tenure at Art Printing in 2001. At the time, the former owner, Ed Kirchner, wasn’t hiring, but Raudabaugh explained why he was indispensable and persuaded Kirchner to give him a shot. Four years later, Raudabaugh owned the business. 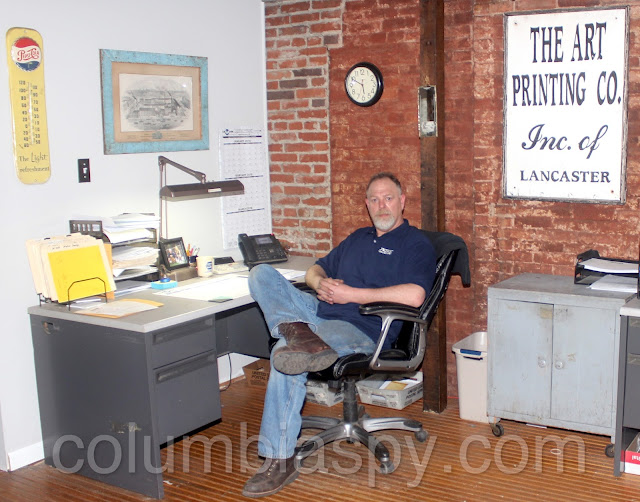 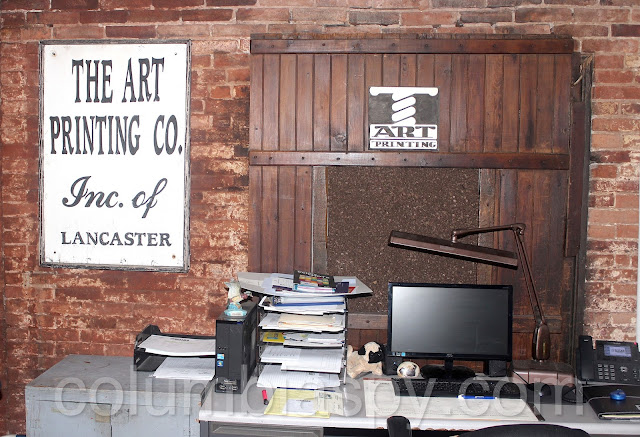 A closer look with an original business sign from when the business was located in Lancaster.

Raudabaugh knew he was going to be a printer from an early age. He calls himself a “Donnelley orphan,” because his parents worked the swing shift at the Donnelley Printing Company. He studied graphic arts at vo-tech and started his career at Brenneman Printing in the Greenfield Industrial Park right out of high school.

“Printing’s kind of always been in my blood,” he explains. He then worked his way up through the trade, learning a variety of skills at various print shops. 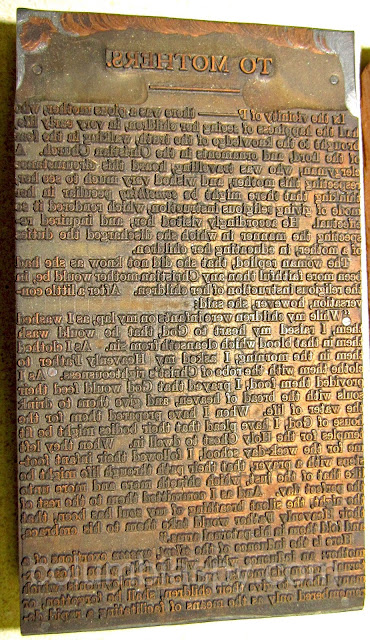 A printing block with type on copper-lined lead. 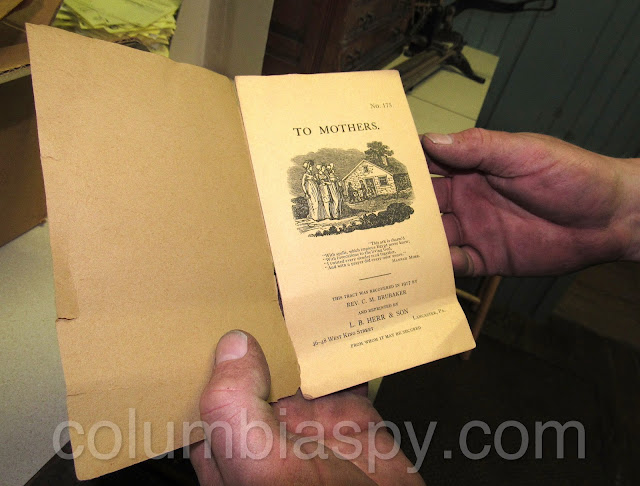 This booklet was printed using several blocks of the kind shown in the previous photograph.


Raudabaugh considers himself a bit of a bridge between old and new; he can operate older letterpress machines, and is even able to make his own lead type on a Ludlow machine. But he’s also adept at offset printing and more recently digital printing, now considered state of the art. Letterpress is making something of a comeback, he says, because of the textured impressions the process makes on paper, an effect that can’t be achieved with digital printing. Letterpress jobs are usually requested for special occasions such as wedding invitations and the like, although most demand is for digital. “Printing has come a long way,” Raudabaugh says of digital operations. “Things have changed a lot since I started printing.” 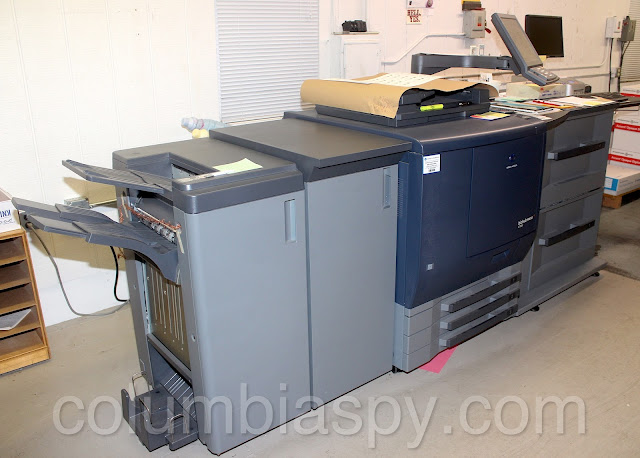 
Currently, Art Printing has six people on staff including Raudabaugh, and wife Amy, who handles the paperwork from the in-home office in Pequea. The operation also boasts a graphic designer, Roz, and several other printers. With a turnaround time of five days, the business can produce business forms, note cards, door hangers, tickets, newsletters, posters up to 12” x 18” and even reproductions of paintings, as well as other items. “We can do anything on paper,” Raudabaugh says, adding that the business even has a complete bindery operation. 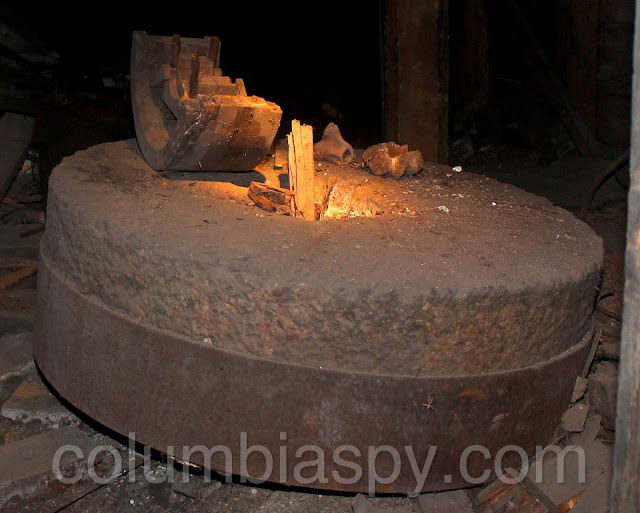 This millstone, once used in a flour and feed mill operation in the building, sits in the basement. 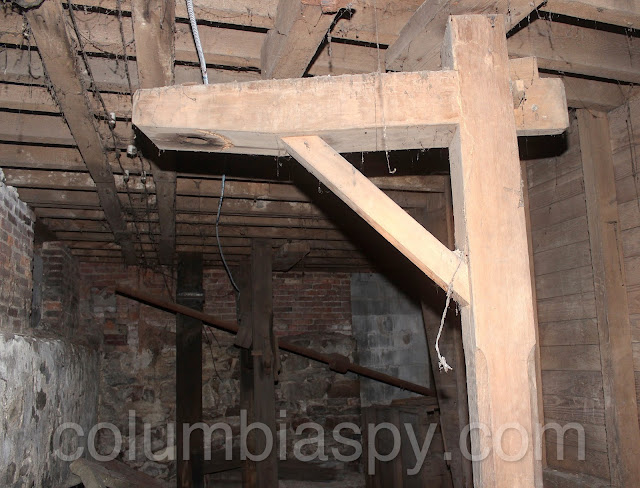 This sturdy wooden support was also used in the operation. 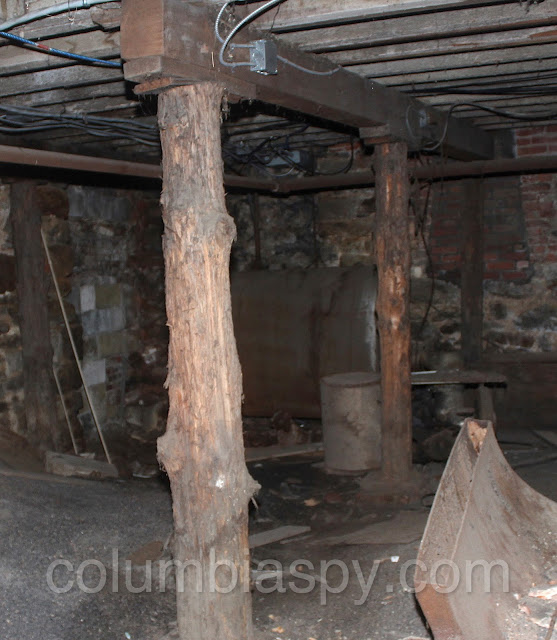 
Raudabaugh says he loves the history of the building. He explains that part of the building, at the main entrance, was a bank. During the Civil War, a meeting of Union Army officers once took place there. Another part was a flour and feed mill in the 19th century, evidenced by artifacts still in the basement: mill stones, wooden supports, large metal gears, and pieces of grain. On the Locust Street side of the basement, a brick archway - now blocked up - appears to be the entrance to a tunnel leading under the street. There is a small opening on the upper right section of the archway. Local historians believe that the tunnel is one of a network of tunnels under Columbia once used to hide and transport slaves in the 19th century as part of the Underground Railroad. 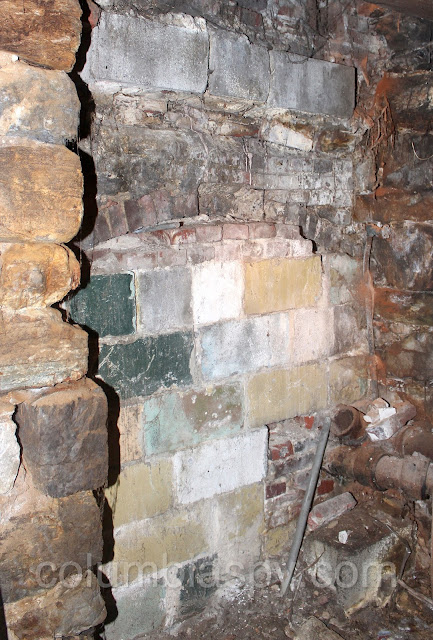 A blocked-up brick archway in the basement appears to extend under Locust Street. 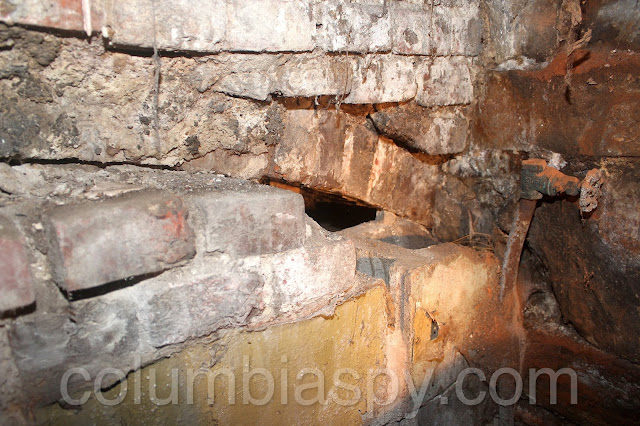 Part of what is believed to be a tunnel can be seen through the missing bricks. 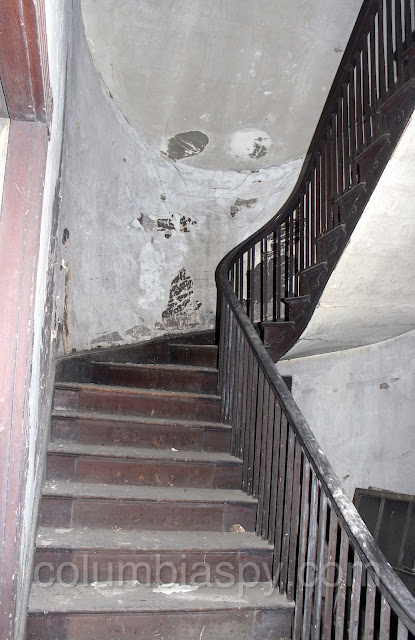 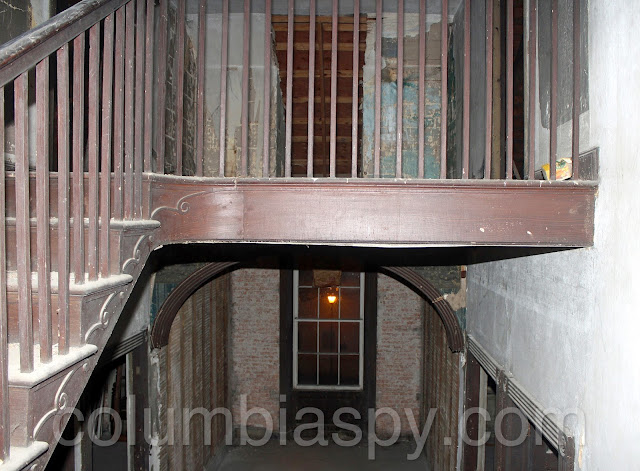 Looking from the stairway towards Locust Street. 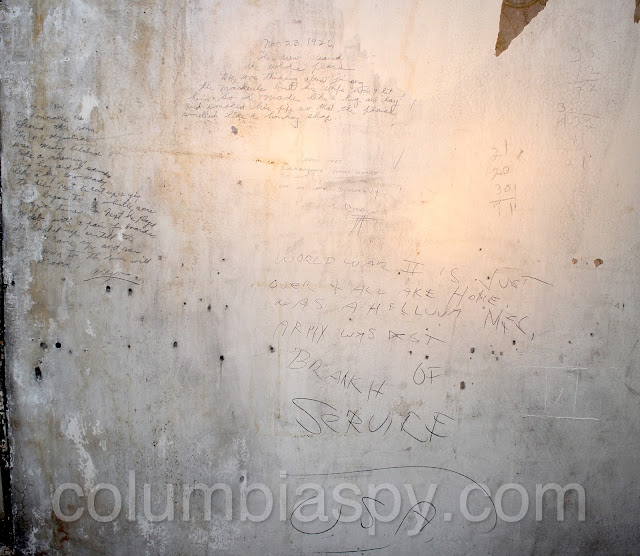 Pencilled notes from previous times on an upstairs wall.
One is dated March 23, 1926. Another appears to have been written at the end of World War II.


Work needs to be done to the second and third floors, Raudabaugh admits, but says he feels blessed to have the building and is considering future possibilities: maybe a regular ghost tour or a second floor antique shop. He’s also planning for the business’s 100th anniversary in four years, but for now is happy to be in his new location near the river. He says the walk-in traffic here has been “awesome” and includes business customers and individuals. “We’d like to see people in Columbia use us. We’re here. We’re part of this community now,” he says. 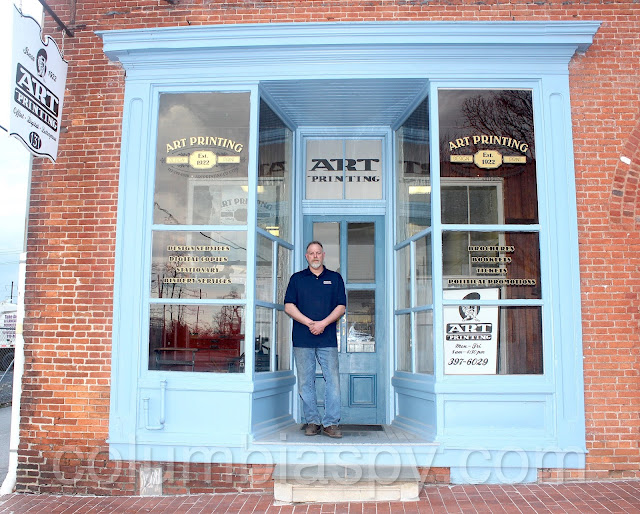 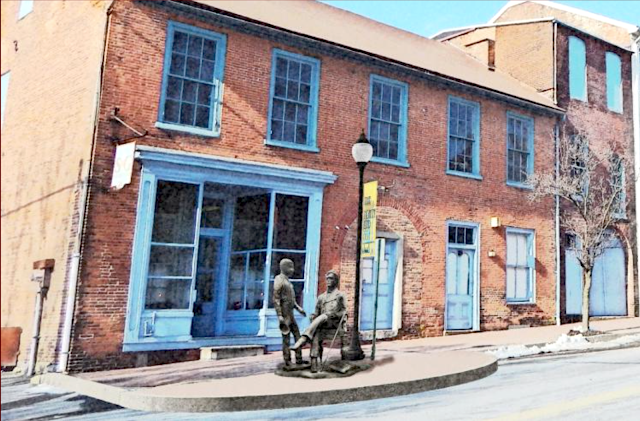 An artist's conception of a bronze statue that will be placed in front of the shop. The project will be financed through private funding. The illustration appeared in the March 2015 "Columbia Downtown Master Plan."
Posted by Joe Lintner at 4:07 PM

Wow...this is a really beautiful story...I love the history you have shared about the building and I can totally relate to your art and passion for printing. I also worked at Donnelly Printing for 21 years...and I worked with your wonderful mom Donna...I always admired her for being a mom with 2 kids...and working the grave yard shift...it's great to see how her kids turned out..that's a mom's proudest accomplishment.Have a great year and I will pass your business on to fellow co workers...graduations coming up...and weddings...I feel your be very busy.

A little history on this building....

The House of Samuel Miller 1804
Bought by the Columbia Bank & Bridge Company for $12,000 in 1811, and used by the bridge company as an office until 1872. William P. Beatty, treasurer of the Company, occupied all rooms but the first floor to the right of the large central hallway and winding staircase. This house, located at the northeast corner of Locust Street and Bank alley, was built in 1804, and before being altered for business purposes was a beautiful mansion of many rooms and large back building. All fireplaces and part of the stairway have been removed, and nothing of its former splendor remains.

The history of this building lies deep in secrecy of what is known as the Underground Railroad. Many historic figures such as Stephen Smith, Thaddeus Stevens, William Whipper and William Wright held meetings of business as Directors of the Columbia Bank & Bridge Company. This company was vital for the transportation over the Susquehanna River, and was owned by a host of shareholders. The first bridge was started in 1811, and completed in 1814 where a toll was placed on all transportation modes such as cows, horses and wagons crossing the river.
After the Columbia Bank & Bridge Company moves out of this building, Brenneman’s Feed Mill built the carriage and mill building. Their business flourished in the late 1800’s to early 1900’s until the automobile was introduced, where feed for the horses were no longer needed in the town of Columbia.
In the 1920’s the Baker Toy Company, where many patented products were designed and manufactured in this building in the next six decades.

The building adjacent to the CB&B Company was also a mansion built in the same year. Though the we can not confirm the original owner of this home, the Barber family occupied this dwelling in 1850. Of course this building will be torn down to make way for the new apartment complex.
The tunnel head in the photo above was examined by myself in 2016. The tunnel was back filled when the sidewalk and street were reconstructed many years ago. We believe that William Wright would have used this tunnel to keep a low profile due on the account of bounty hunters and slave owners hatred toward him.
This is just a small piece of history that will be on exhibit this year at the Columbia Historic Preservation Society in 2018. We will be reopen on Saturday, April 21 from 1:00 PM - 4:00 PM.
Thank you,
Chris Vera
Columbia Historic Preservation Society
www.columbiahistory.net

great job chris, it is better than auto parts.

Thank you so much!

Best of luck!And as someone who was treated so kindly,when I paid a visit as you were just in transition with the shop,I have recommended you.
Also the history of the building what a Gem!

Has anyone seen any ghosts in the art building.