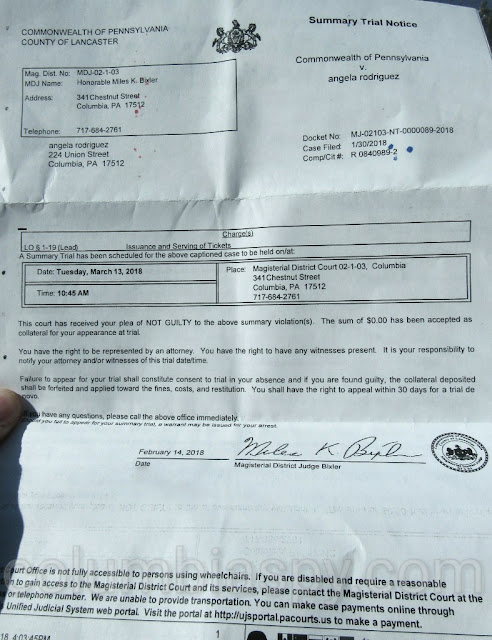 A Summary Trial Notice shows an incorrect name for the defendant.  The mistake was initially made on the quick ticket that was issued.


A Columbia man successfully beat a quick ticket charge due to mistakes by the officer who wrote the ticket. At a March 13 hearing before District Justice Miles Bixler, the defendant, Angel Rodriquez, said the name on the ticket - "Angela" Rodriguez - was incorrect. Rodriguez also said he does not own or rent property at the Union Street address listed on the ticket. According to Rodriguez, he entered a plea of "Not Guilty," and charges were dismissed based on the errors. The quick ticket was issued for a small TV placed on the sidewalk outside the address.
Posted by Joe Lintner at 6:04 PM

Name maybe messed up but he does rent from there. If he doesnt now he DID.

Did he get his hundred dollars back, or did,t he put it up?