Howard granted continuance, has no attorney 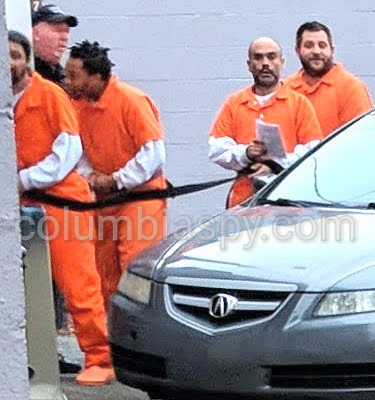 Randy Howard (crouching, third from left) attempts to evade cameras as he is taken into District Judge Miles Bixler's office building this morning.

Randy Howard's scheduled preliminary hearing today at District Judge Miles Bixler's office was continued because he doesn't have an attorney. A public defender cannot be appointed, because it would create a conflict of interest due to the fact that he would be represented by the same group that represented a person recently convicted in the incident. A pro bono private attorney will be appointed instead. The hearing will most likely be rescheduled in two to four weeks when all attorneys clear their schedules and are available on a "block day," several of which are held each month.

Howard is charged with aggravated assault and criminal conspiracy in connection with the September 3, 2017 wolfpack attack on a Columbia man on the 600 block of Walnut Street.

According to a source, a person was recently picked up by police for allegedly harboring Howard.
Posted by Joe Lintner at 5:44 PM

Howard was STILL trying to hide as he was ushered into the Magistrate's office. He used the other inmates to shield him from the camera. Sharon

so damn happy they caught him! he deserves to be punished....punk.