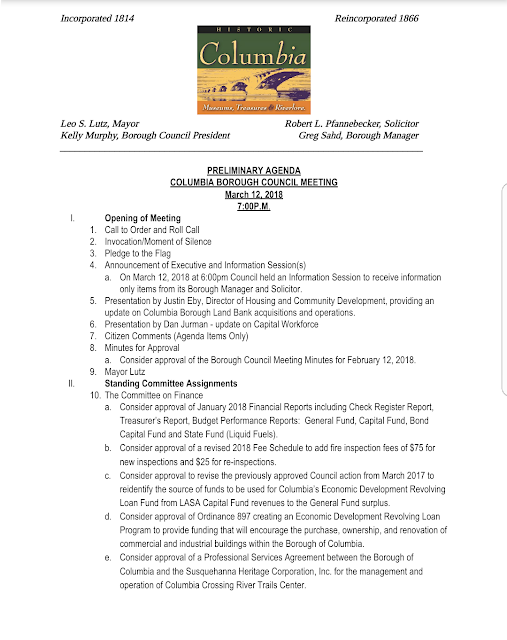 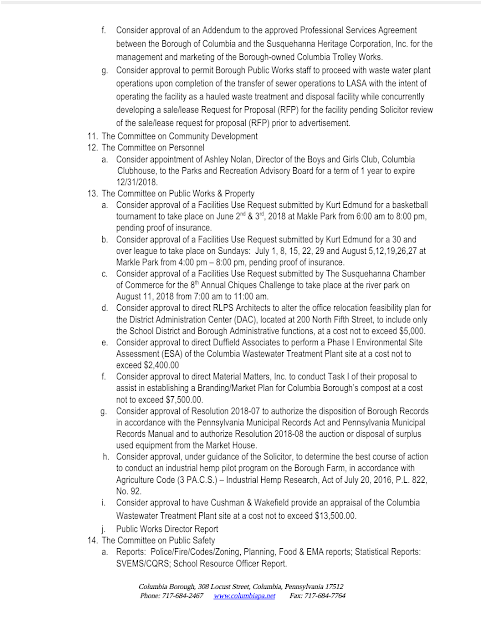 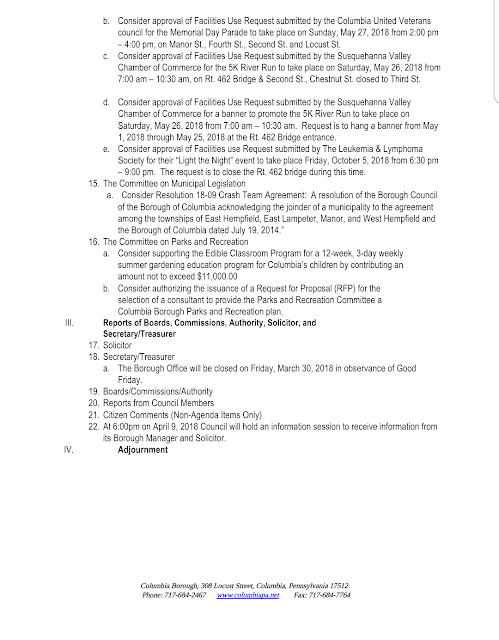 People that work for the borough should have to live here. Isn't there a ordinance of some type about this? It should be ,we need pride in this town again.The council made a ordinance QUICKLY after hiring a Rebecca Dellinger(from lampeter) a few weeks after the hire.BACKDOOR stuff that the borough does,and they wonder why people don't attend meetings, they already know how they will vote.One meeting they voted Miss Hartman in and she was voting on things she didn't know any thing about 10 mins. later, just going with the rest of council. There is something very wrong with this govermenting body of Columbia, just like the school. If they merge into the same building this town will be (BANKRUP) or worse...WE NEED HELP NOT THIS DICTATORSHIP THATS GOING ON NOW!!!!!!!!

When they hired r. Dellinger they (council) voted her in, than they opened comment to the public. At that point a citizen commented that there was no sense in talking because they already voted her in, at that point council said owell. WE NEED BETTER LEADERSHIP! Just think what gets threw with out public seeing. Cole please keep us informed.

This is Columbia not a big city,council should start acting like the towns money is there own. ($40,000 fence) WHAT THE H___?

I agree people who earn our tax money should live here not the people who don't. Rebecca already has too much to say. Other boro managers never needed an assistant and if Sahd can't handle the job he should go. Also lead paint has been around for years why do we hear so much about it now no one will want the market house the condition it's in. People need to pack the council meetings.

The meetings are just a formality, they know what the click wants from there meeting just before the public meeting. Its a joke , if they realy wanted to know what people think they would publicly annonce whats coming up.But that would slow or stop pet prodjects. As for rebbecca the job was never posted, she just brings other out of town ideas,move to Columbia, pay our taxes,obay our laws,become a Columbian.

CLOSE DOWN THE SCHOOLS,USE THE SO CALL HILL CAMPAS AS THE NEW BOROUGH HALL,RENT OUT THE OLD BOROUGH HALL TO JUNK SHOPS,MAYBE THAT WILL BRING ALL OF THE TRAIL PEOPLE UP INTO TOWN.$$$$$$$ Money seems to be NO problem with this council or borough managers(2) Wait maybe we could CUT ,yes cut taxes,send kids that want to learn to schools that produce. The other kids shape up or ship out, come on Columbia we are be coming a laughing stock of the county,ask dellinger she brings a lot of other stuff in from Lampeter and Millersville etc....

I agree she should move to Columbia. We hear what other towns are doing especially Lancaster we are a small town Columbia. not Lancaster. The Land Bank is another joke. John Novak is a good person on council I think he looks out for the townspeople.

I agree but he(john) can't do it a loan

The job was never posted. She is a consultant how does that qualify her for borough manager? Her ideas ,if you check will come up some where as someone elses.So Columbia tax payers are paying her 65,000 this year and 99,000 next year+ about 30,000 a year in benefits,council needs common sence.

DOES COUNCIL MEMBERS HAVE TO LIVE IN TOWN??? IF SO WHY NOT OTHER BOROUGH EMPLOEES? IF NOT THAT IS PROBLEY SOME OF THE PROBLEM. THE TOWN NEEDS TO GET IN CHECK WITH THE PEOPLE WHO PAY THE TAXES, THIS OUT OF CONTROL SPENDING HAS TO STOP,YOU CAN'T TELL ME THAT COUNCIL PRESIDENT KELLY SPENDS HIS OWN MONEY LIKE THIS, AND THE MAYOR,AND EVERY ONE ELSE ON THE COUNCIL, I DON'T SEE A LOT OF TASMAHALLS IN TOWN,BUT MAYBE THEY DON'T LIVE HERE .MAYBE SOMEONE CAN ANSWER THESE QUSTIONS?

What did the borough do with the 8 million Dollars they got for the sewer system?? LASA took over the 12 million they owed on the up grades. DOES THIS COUNCIL THINK THE TAX PAYERS ARE MORRONS??? THANK YOU COLE AND SHARON FOR LETTING PEOPLE EXPRESS THERE OPPINIONS AND IT IS THE ONLY WAY CITIZENS KNOW WHATS GOING ON,and why does it take 8 to 10 weeks for the borough to filter and post the out come of these council meetings? THEY have more people in that office than ever. RUN THIS TOWN LIKE A BUSINESS AND THINGS WILL CHANGE.

THE land bank is a joke, borough puts 51,000 into a building, Bigler gives it to them, land bank will take it if the tax payers put 75,000 more into it(they ask for 130,000) THAN THE BOROUGH SELLS IT TO THEM FOR 1 DOLLAR AND THEY ARE GOING TO PUT A SUBDIVISON OF THERE OWN CO IN IT, TAX PAYERS OUT 126,000 dollars plus other expences,AND OUR TAXES GO UP,WHAT THE H---AND THAT IS ONLY ONE PROPERTY.THIS BOROUGH NEEDS LEADERSHIP, CUT TAXES,MAKE BETTER DECISIONS,AND DON'T EVEN START ON THE SCHOOL,UNDER A FAIDED LEADER THAT COULD RUN A AGWAY OR KEEP A JOB VERY LONG, IS THIS THE KIND OF LEADERSHIP WE NEED? HE ALSO SAID HE DOES'T CARE WHAT ANY ONE THINKS. THE TOWN IS GOING TO TAX CITIZENS AND INVESTORS OUT OF HERE IF SOMEONE DOES'T GET HOLD OF THIS MESS.

WHAT DOES THE MAYORS ASSESTANT DO???