A part of Columbia will be looking a bit brighter soon thanks to a major lighting project currently in the works. On Monday night, borough council voted to purchase and install new lights along Route 462, from Second Street to Union, with an approximate price tag of $300,000 plus installation costs. Each of the 60 cast iron lampposts, with attached cross arm, will be about 24 feet high and will support "lechmere-style" luminaire fixtures with LED lighting. (Additional information about the luminaires can be downloaded HERE.) 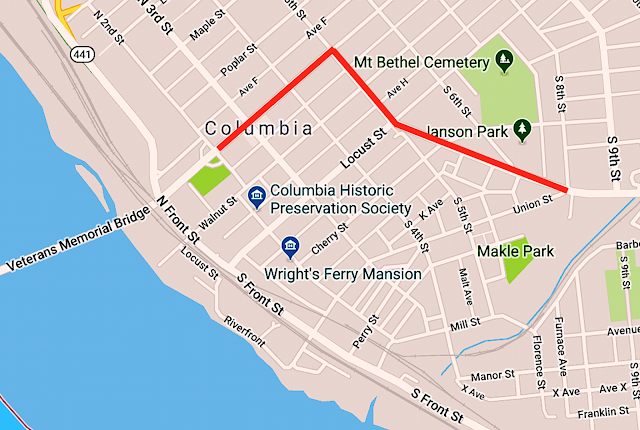 The red line on the map shows where lights will be installed.

"This project is part of the bond proceeds," explained Councillor Cleon Berntheizel. [In November 2016, council voted to approve a series of general obligation bonds that can be used to finance capital projects and other things.]

Berntheizel said that the project was initially planned "years ago" and that electric conduits are already in place along the route. He also noted that this is the first phase of the project, with a planned second phase continuing to Malleable Road.

Public Works Director Ron Miller said the lampposts have an added benefit, in that they are high enough to accommodate larger Christmas ornaments. Miller added that the posts will replace any fixtures and posts currently state-owned.

Drawing of lamppost with cross arm and luminaire

Miller said U.S. Congress's infrastructure bill might provide additional funding and that PPL could provide rebates due to the use of LED lighting. Mayor Leo Lutz added, "I feel certain with Columbia Borough's administrative team, that if money can be found anywhere, they will find it." Of the undertaking, Lutz noted, "This is more of a beautification project."

In a unanimous vote, council passed the measure but without discussing specific prices. Later in the citizen comments section of the meeting, Frank Doutrich asked about the omission. Assistant Borough Manager Rebecca Denlinger said the figure is in the community development minutes. Council President Kelly Murphy concurred. "It was talked about at length at community development," he said. Ron Miller then provided the roughly $300,000 figure for the cost of lights, not including installation.

In reference to the lighting project, the following is an excerpt from the December 2017 Community Development meeting minutes, with no specific figures discussed:

The January 2018 Community Development minutes are not yet posted.

Doesn't the coffee club know that 462 is a state road? Shouldn't the state be paying for it? $300,000 is a lot of money for more Christmas lights. The Coffee Club remains focussed on the wrong things instead of public safety, better streets, developing the McGinnis airfield property,and the list goes on. They won't listen to anyone because they only want to spend money that isn't theres. How many on the council are actually life residents of this town, who understand Columbia and how many of them do you see walking the streets and supporting the town? NONE, except for the Second street Boro hall.

Boro employees should live in Columbia they are taking our tax money out of town. And who puts Christmas lights on 462?

I think this is an awesome plan! It will add to the charm and character of our community. Many folks drive through our town will make a very good impression. Hopefully they will be able to extend the lights out past Gladfelters field. Awesome can't wait to see it!

As a columbia home owner, i think that a lighting up grade is great, and a huge crime reduction tool, there have been huge lighting upgrades on my block in the last year by a local buisness putting up LED lights all around there facility, and since they were installed our cars have not been broken in to, and the big crowds of kids that used to travel down this area have now changed there route of travel, i know what they are proposing sounds expensive, but let them brighten up the area, and you all will see, the results

How many council members were present at the community development meeting for the lengthy discussion? I would like to know if all council members knew the cost of the project prior to voting. Residents are "in the dark about the lights" since minutes from the January meeting have not been posted yet.

It's about time they brighten up the town. I know there are a lot of people on here that are looking for ways to blame the council for mishandling funds and complain about everything the board does. God himself could reach down and turn this into the perfect town and the same crybabies would scream foul.

God himself cannot fix this town. If the "cry babies," AKA taxpayers, do not question spending by their elected officials then they are shirking their own civic duty. Personally, I wish they would ask more questions.

I agree 100% its a shame that the roads, pot holes and are taxes are not being taken care of first!!

Steve H. who objected to spending money on the lights, was told to "Get involved." I am telling everyone that getting involved will change nothing. The elected officials along with those hired to work for our town will do what THEY want regardless. Steve could voice his opinion during meetings that last for hours, but in the end his voice will mean nothing. Keep opening your wallet and keep your mouth shut.

A very small group, some elected, some appointed, some taxpayers and some not, decide what OUR money will be spent on. We pay for their decisions. Yes, we vote, but that is no guarantee that the candidates we voted for will win and even if they do win there's no guarantee that they will do what they promised. Any large amount of spending should be on the ballot. All big ticket projects should have to wait until they can be voted on by the people. A decision to spend large amounts of taxpayer money should never rest in the hands of a few.

council are you trying to bankrupt Columbia?

Where did the anonymous family originate from? I've been a resident of Columbia for 70 plus years now and I don't remember any family with the name Anonymous? They must be a very close knit family as they all have something to say about the light project the boro is undertaking. I thought more people than the Anonymous family would be responding. My name is Michael T. Resch and I approve this message and stand behind it. Let's exercise a little caution before we spend $300.000.00 just for the fixtures. I have to believe the cost for installation will exceed $300.000.00 and then there are always the unseen costs that evolve on any project.

Life residents? What an absurd statement to make. Build the wall around Columbia then to keep the outsiders away?