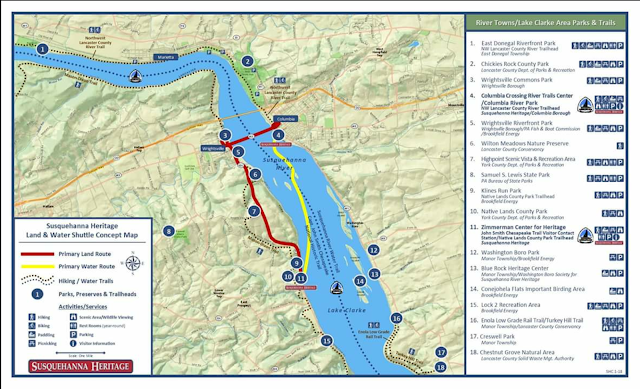 Susquehanna Heritage seeks a consultant team to conduct a feasibility study for land and water shuttle services in the River Towns and Lake Clarke areas of the Susquehanna River corridor through Lancaster and York Counties in Pennsylvania. The primary purpose of the study is to assess the financial and operational feasibility of transporting visitors between the Zimmerman Center and Columbia Crossing through a seasonal land and water shuttle service with on-board interpretive programs. This new service is intended to improve visitor readiness, expand visitor programs, and build visitation from outside the region.

http://www.susquehannaheritage.org/susquehanna-heritage-announces-land-water-shuttle-study-request-for-proposal/
Posted by Joe Lintner at 7:40 AM

WHO is paying for the "consulting team"?
Even if Columbia Borough is paying part of this, what happens to the $15,000 anticipated in 2018 for consulting fees. This, in addition to the consultants being hired due to failed funding for the streetscape project, seems like this would put us WELL OVER the $15,000. Let's see some real numbers.
Sharon Lintner

Susquehanna Heritage is. I think it's pretty clearly stated.

I agree why must this boro spend for unnecessary things it will never be like the good old days. People just can't afford to pay all these taxes most are on limited income in this town.

What good is the trail attraction doing for the residents here? It may be nice for residents to use, but an expensive playground we are funding for others. The others, by the way, are not all going up to town. Even if they were, how is that helping the average homeowner? Don't tell us it will raise home values. Columbia is fast approaching a 50% rental vs ownership ratio. In the forgotten end of town sale prices are lower than they were in the early 1980s. The town looks dead most of the time.

Yes, it has been clearly stated, so who will really pay for it? It was also clearly stated that the Columbia Crossing building would be maintenance-free.

Where does their money come from?

Is this an actual need for people? Is it for transportation to and from work or just a tourist fun thing to do?

Columbia Borough is clearly listed on the Susquehanna Heritage website as a funding source. YES, we are helping to pay for the study. Stop trying to hoodwink the residents.

People that use the rail trail and river park are NOT spending money in Columbia. They would not buy a .50 cent soda from a hot dog wagon at the Columbia end of the trail, yet the tax payers paid for the paving of Heritage Drive so the trial users would have some where to park. There are streets that have traffic on them in Columbia that should have been paved first. A fence and trees should have been installed at an entrance to Columbia not the cabins, relax cabin owners this is not to get you upset, understood you are taxpayers also and it was not your decision.

People who are on the trail for exercise are probably not interested in a hot dog or a soda, but I get your point!