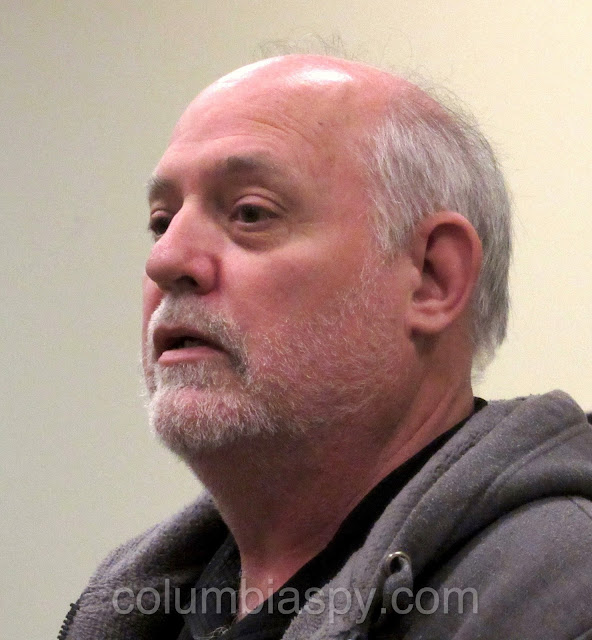 Fisher: “We're not vigilantes. We don't intervene in any situation."


At December’s Safety Committee meeting, Rick Fisher met with borough officials to try to find solutions to crime in Columbia. The upshot was that residents need to be more vigilant, and the borough needs to do more to prevent teens from getting into trouble. To that end, a number of ideas were proffered that have yet to be put into action.

Fisher, whose Crime Watch PA Facebook page (since changed to Neighborhood Watch) serves as a forum for residents, said he was outraged at a wolf pack-style attack of a local man a few months ago and started the page to try to do something about borough crime. The page spawned several meetings with borough residents who held similar concerns. (Those residents were invited to the December Safety Committee meeting, but only a handful attended.) The group has since morphed into a kind of neighborhood watch in which several people have volunteered to become block captains. Police Officer Dave Souders is the liaison with the group. 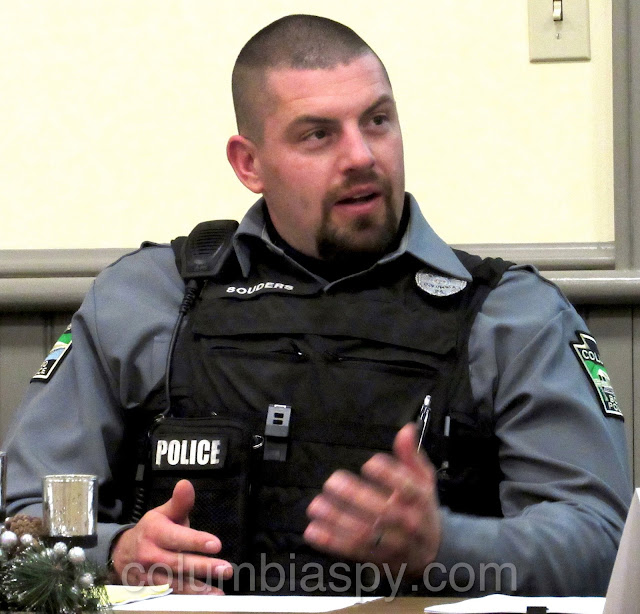 Officer Dave Souders is liaison with the citizens' group.

One of the goals of the watch is to urge residents to develop relationships with neighbors and to “watch out for each other.” Fisher has urged residents to contact police if they become aware of a crime. Unfortunately, he says, not enough people do so. As an example, he cited a recent incident of vandalism in which perpetrators were seen around 3 o’clock in the morning. Several reports were posted on his Facebook page, but there was only one call to police. "I'm out of breath trying to encourage people to call police,” Fisher said. "We have to be the eyes and ears for the police department." He stressed that police can't help if residents aren't helping but noted, "There's a lot of mistrust with the police." To tackle trust issues, Fisher suggested creating a citizen advisory board in which citizens working with police can handle concerns. He said he has floated the idea with members of this group and has received a positive response. “We want to win the trust back of the people, because if we can't do that they're not going to call the police." 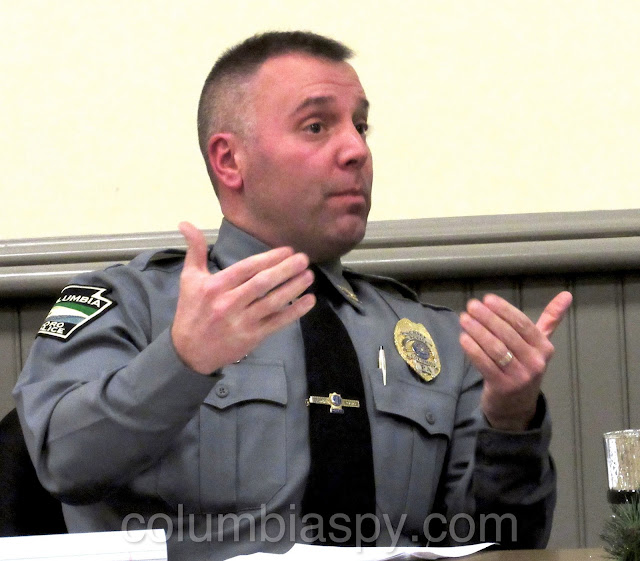 Brommer: "There needs to be an emphasis on contacting the police department.”

Columbia Police Chief Jack Brommer said he supports Fisher's efforts. "There needs to be an emphasis on contacting the police department,” Brommer said. “If there's some mistrust out there then we need to do more to gain that trust back."

Fisher noted that a Citizens on Patrol Program (COPP) has been implemented and proven successful in other communities. The program entails residents patrolling neighborhoods in their cars to look for any suspicious activity. The goal is not to intervene but to report activity to police. “You see something, you say something,” Fisher said, but advised against getting directly involved in an incident. “We're not vigilantes. We don't intervene in any situation." 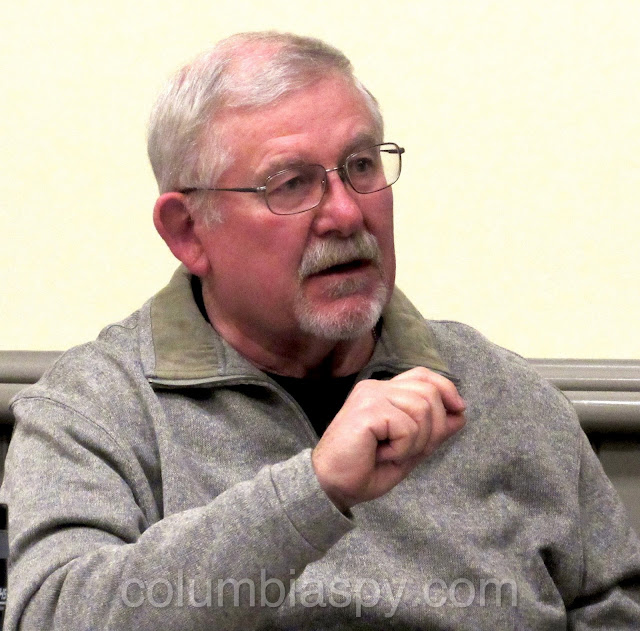 Lutz: “We check it out and many times we find out no one ever called."

Mayor Leo Lutz re-emphasized the importance of contacting police. “When someone sees something they need to call the police,” Lutz said. He noted that officials monitor social media to determine how many incidents are posted as compared to those reported to police. “We check it out and many times we find out no one ever called." (Residents can request that their name be withheld, that is, not to be broadcast over the scanner/radio.) 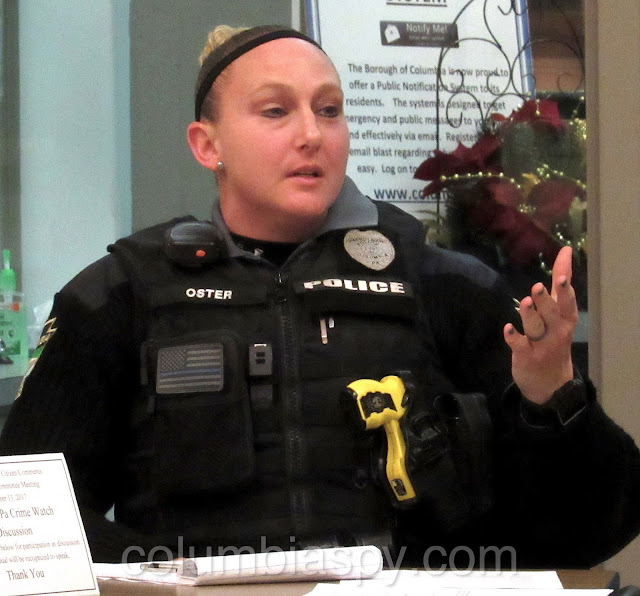 Oster: "We get called and nobody wants to talk to us and tell us what happened.”

Police Officer Holly Oster voiced frustration as well. "As a patrol officer, it's frustrating at times. We get called and nobody wants to talk to us and tell us what happened,” she said, adding that police are willing to do whatever they can but need the support of community members.

Fisher noted that adult criminal arrests are down from last year but juvenile criminal arrests are up. He suggested that one factor contributing to the problem might be the lack of things for young people to do. According to Fisher, the mayor and police chief told him that “outside sources” would be coming to town with ideas for program for kids. He suggested introducing a boxing program but noted that it would require funding as well as base of operations. He said another option might be for the school to schedule speakers, such as ex-gang members, ex-drug addicts, and ex-convicts who turned their lives around.

Brommer agreed with Fisher’s assessment. He stated that the community’s top priority is addressing problems with youth. He said young people need to be engaged more. He discussed bringing in an outside consultant to mentor challenged youth. Another initiative in progress is a long-term strategic plan involving the police department, school district and youth, as well as the Department of Education and IU13. The program is due to be rolled out in early 2018.

Lutz suggested bringing a weightlifting program called Benchmark to the borough. "It's been proven to be successful in Lancaster City,” he said. Lutz explained that, under the program, an area like a gym would be set up where teens would come and go as they please. Once they become comfortable and start to trust, mentoring can occur. 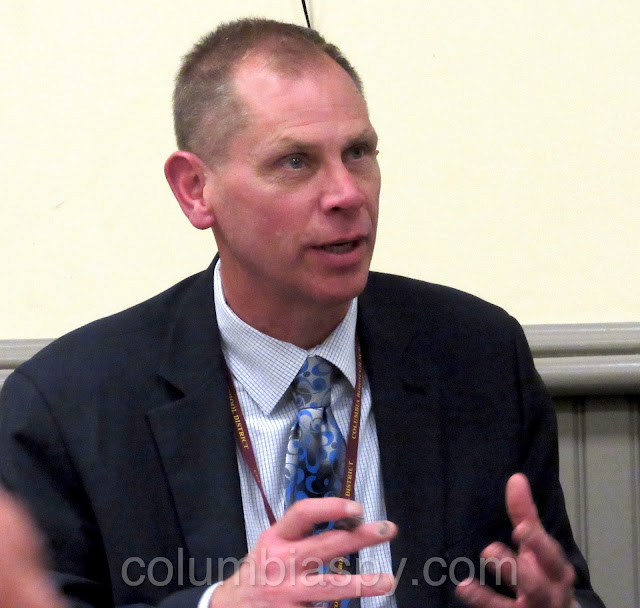 Strickler: "What I have seen from this community is they’ll step up for kids."

School District Superintendent Tom Strickler also praised the success of the BOOM group as well as 5th Quarter, a group that meets after home football games to provide a place for youth to go. He said the Black Olive Family Diner has regularly donated to 5th Quarter (as have a lot of other businesses in the community.) "Every 5th quarter this year has been donated by Black Olive,” Strickler said. “He [Black Olive owner Fatih “Mike” Sivri) has no problem giving more." Strickler also said the district’s athletic programs and other groups are desperate for participants. Committee member Mary Wickenheiser concurred: "There are programs that are starving for kids to be part of." Strickler offered his support for the neighborhood watch group by providing a meeting place during library renovations. 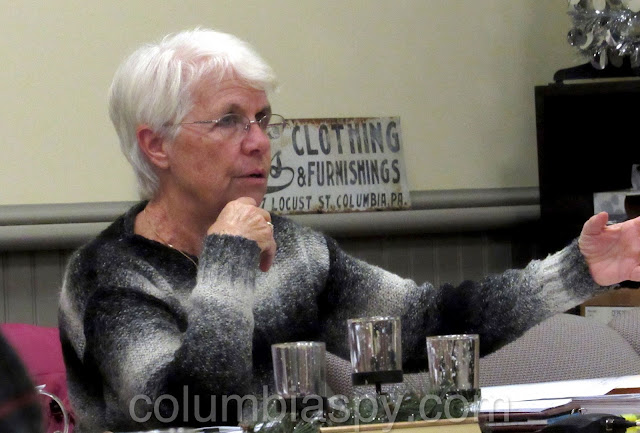 Wickenheiser: "There are programs that are starving for kids to be part of." 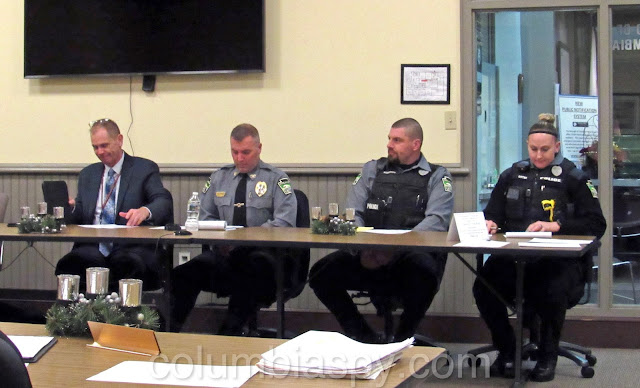 Upcoming changes are slated for the borough’s camera system, which will be expanded and updated, according to Lutz. Currently, 21 camera feeds appear on one 25-inch monitor, but the borough plans to buy bigger screens and additional cameras. Borough Manager Greg Sahd also said there will be an increased number of cameras in the borough. "Naturally we don't want to share where those cameras are and where they're targeted to go, but that would be a another tool in your box to combat vandalism,” Sahd said. (So far, Columbia Spy has currently located 20 surveillance cameras in plain sight around town we believe to be under borough control. At November’s Borough Council meeting, Lutz said the borough has “exactly 50” cameras, but did not reveal their location. He said some cameras are “covert.”) 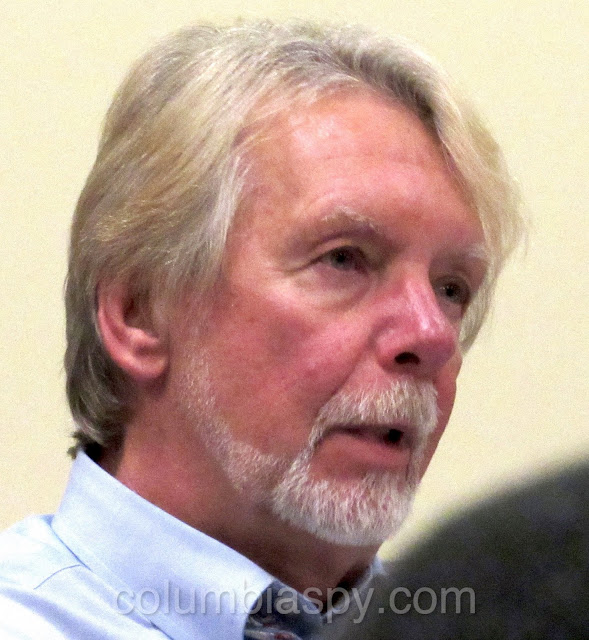 Novak: “This evening you've seen a show of community commitment from the schools to the police department to the mayor to the council president to the safety committee that is behind what you're doing.”

Safety Committee Chairman John Novak expressed confidence with the direction of the citizens’ group. “You're on the right track. We're here to support you and conversely for you to support us,” Novak told Fisher. “This evening you've seen a show of community commitment from the schools to the police department to the mayor to the council president to the safety committee that is behind what you're doing.” 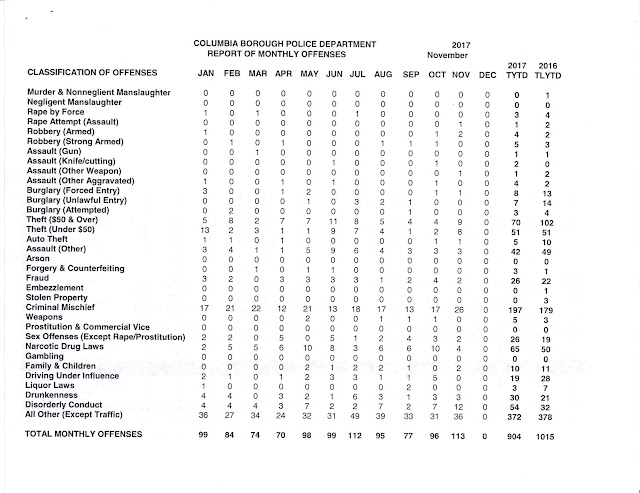 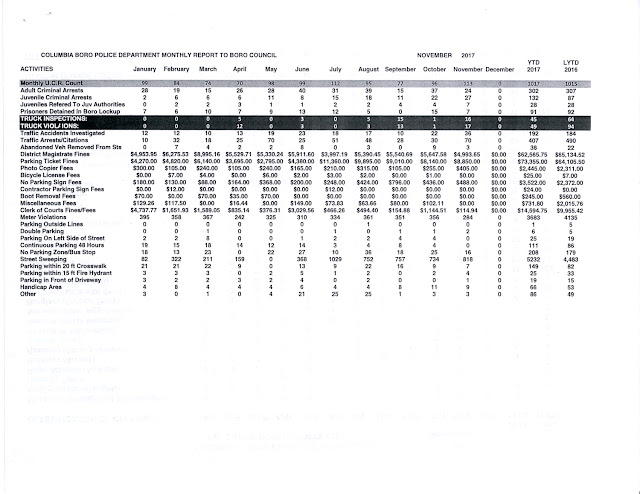 Was that Howard guy ever arrested or caught for the "Wolf-pack" attack on Walnut Street? I know he was charged, but I don't think they caught him.

I think there was only one arrest out of several men involved. That was four months ago. I also heard some people trying to blame the victim.

I don't think he's been caught. UJS lists the case status as "inactive."

An update on these investigations would be a fitting addition.

The police wouldn't do anything even if you want charges filed I know for a fact.

funny you should mention that. iF we are going to have a Police Dept. we MUST support them 100%. they should NOT to allowed to work any shift with ONLY 2 officers. Its dangerous, unsafe and unacceptable. again, if we are going to have a police force we must support them and stand behind them. on another note.....stop buying new cars and hire more officers so that there are 3 or 4 officers on a shift. OPEN THE DISPATCH CENTER 24/7. All the police dept, including and starrting with the chief and the mayor MUST be more approachable, must be seen, must be out and about (except in this extreme cold or outrageous heat!)

Exactly! If you do go out on a limb and call them be prepared for them to make you the bad guy.

I have heard this "two officers on duty" story for a long time, yet I always see three or four. It can't always be a shift overlap.

Actually, that happened to me once, the police call I made (to report a concern) turned into a wierd discussion with the officer. Since that was my experience, I have to agree that sometimes they try to make the caller out to be the bad guy. Judgemental?

Contact the Columbia Police when a crime occurs?? Seriously?? That's a good one! Even with proof, the cops side with the perpetrator and make life hard for the victim. For three years I was stalked by someone in Columbia and the Chief of Police informed me himself that they wouldn't do anything to stop it. The police department is a joke!