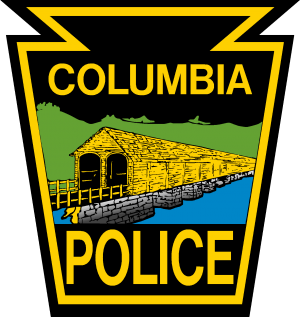 On 11-06-17 at approx. 2041 hrs. the Columbia Borough Police were notified of a robbery that just occurred in the 500 blk. of Ave. G. It was reported to police that two males had followed the two male victims (one adult and one juvenile) from the Turkey Hill on Chestnut St. It was reported that one of the suspects pointed a gun at the victims and the other punched one of the victims in the face causing a facial injury. The suspects then took a wallet with cash and groceries from the victims and fled the area. An officer on patrol located the two suspects in the 400 blk. of Cherry St. and they were taken into custody. Both male suspects are 15 years old and were charged with Robbery and Simple Assault. Both were committed to Lancaster County Youth Intervention Center.
Incident Date:
Monday, November 6, 2017 - 8:41am

Columbia Borough Police Department
Posted by Joe Lintner at 6:50 AM

This is the last straw. We walked home after the meeting last night, ironically the meeting was about the crime in Columbia. We passed this very alley only a short time prior to this crime being committed. Personally I feel terribly discouraged, caught or not this is no joke anymore. Getting a gun pointed​ at you and punched in the face, this has gone too far.

exactly. it's time to take back our streets. these punks have gone too far. time to walk the streets.

How is robbery with a deadly weapon = simple assault? Were these Columbia kids or someone from out of town just living with a relative with a Columbia address?

I call that a slap on the wrist.
It's also to late to take our streets back.

Also, they should be named. Old enough to have an illegal fire arm you should be old enough to be named. I know their were some Columbia kids in the "young thug" program that were arrested last year for robbery and pistol whipping. Those kids did not do enough time. They are again walking around and physically assaulting people in daylight around St. Peter's church area.

Simple assault means they will be back on the streets in no time. The parents should start being prosecuted also.

this is unacceptable. i urge every property in the boro to TURN ON YOUR OUTSIDE LIGHTS AND LEAVE THEM ON ALL NIGHT, EVERY NIGHT. ALSO, CALL 911 IF YOU HEAR SOMETHING, SEE SOMETHING, ETC. the police can't catch them, if you don't report it.

Apparently you witness the assaults, what do you do is my question.

When i was 15 it was called a disorderly conduct, everybody in high school gets into a fight, maybe this fight started at a high school level who knows, maybe it was a cell phone in a kids hand? Or maybe a gun, who knows, yes i agree, that columbia is getting shitty with violence! Prosecute parents for a kid fight,hmmmm does the person that made that comment have kids? If that were the case my parents would have paid alot of money for something they didnt do

The robbery charge covers the robbery with the weapon. The simple assault charge covers the punch to the face, causing injury. Please at least read the criminal statutes of PA and have some baseline understanding of them before you question why certain charges were filed.

I called the police! What else can I do? Shoot them with my concealed carry? No, not in this town where the thugs are just too comfortable. What do you do???

I work. I don't have time. If this is an open forum then I am having a problem with you people being critical of questions or comments. A person can't ask a question .. oh so knowledgeable Columbian!

Let me correct this...it was an alledged bb gun not an illegal fire arm also the cops were aware of a group of kids who stole a crap load pf bb guna from Kmart (on camera) BTW..also cops knew that these bb guns were being distributed to kids ln our streets yet we as parents were not made aware of this to maybe prevent this situation on any others... Yet a piece of halloween candy made breaking news .. Again it was NOT a illegal firearm it was alleged bb gun.. It was wrong yes should not of happened there were things that could of been done tl maybe prevent it and the cops thought keeping that information to themselves was appropriate.. To stop this crime we ALL need to do our jobs to the fullest ability

Maybe we all need concealed weapons, mine is a cell phone.

Columbia Borough should develop a plan that gives every homeowner a free WiFi camera to put on the front of their house connected to their own internet but linked to a common Borough website that every Home Owner has login access to , that way the entire town would be under a common surveillance