Former teacher weighs in on pending school board vote

At the Columbia Borough school board’s committee of the whole meeting tonight to approve Tom Strickler, its current director of operations as the district’s next superintendent;  please VOTE NO!

Assuming board approval, Tom Strickler would replace Bob Hollister, who has presided over Eastern Lancaster County and Columbia Borough school districts since the 2016-17 school year.

The move would go into effect Jan. 1, one month before the superintendent agreement between Elanco and Columbia officially ends.

“CBSD and the community are fortunate that Tom is willing to step into the role in a district that is fraught with challenges.” said Hollister.  if you do not look for a more qualified candidate of course you will not find one.  Bottom line qualification for this position is teaching experience and then administrative experience.  This is not the way a functioning board hires a superintendent.

Sep 20, 2017, Holister said, “Columbia’s finances are more secure than they were a year ago. Columbia students have more technology at their disposal.”

Schools are not judged on finances they are judged on academic success. The Hollister/Strickler team is a failure as cited by Lancaster newspapers 2 days ago (chart).

Hollister described other concerns, such as Columbia's initial resistance to Strickler; this is not resolved it continues

Six board members stepped down in the past year

Hollister’s reinvigorated curriculum seems not to be working 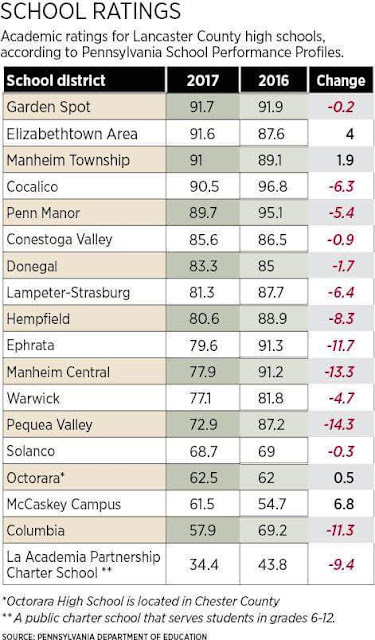 According to the Elanco agreement, they will be paid a finders fee of $25,000 for finding Strickler for Columbia.

Even in today's wacky world of ethics violations...this one really stands out.

This is not over by any stretch of Strickler's imagination.

OUR DUTY AS CITIZENS IS TO FILE MORE ETHICS VIOLATION INQUIRES WITH THE STATE UNTIL THE PEOPLE WHO ARE GUILTY ARE CHARGED.

CALL AND EMAIL YOUR REPRESENTATIVES.. WEAR THEM OUT WITH COMMUNICATION UNTIL THIS FLAGRANT VIOLATION IS CORRECTED.... CALL PDE..TELL THEM THAT THIS MAN SHOULD NEVER BE APPROVED BY THE STATE....THIS FIASCO CIRCUMVENTS THE ESSENCE OF THE LAW.

THIS CANNOT BE ALLOWED TO TAKE PLACE.

Thank you Vickie for taking the time to write this. You words are the sentiments of many in this community on this subject.

Ever consider the representatives may be part of the plan to install him?

The whole Strickler situation stinks.It sounds like a underhanded deal.

Was this position ever advertised? If so, where. If Strickler is hired,it shows the board does not want to take the job seriously.Also, if the $102.000 is correct,how did board base the salary. People deserve answers.

Hope Strickler does not celebrate too soon.

This is not over.