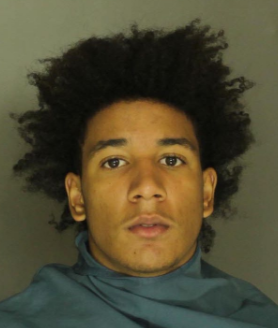 A Columbia man will serve up to 62 years in prison for shooting at a police officer – one of several cops in the area as gunshots rang out in a Columbia neighborhood.

Marquell Rentas, 18, will serve 30½ to 62 years in prison for the events of July 29, 2016, as ordered by Lancaster County President Judge Dennis Reinaker.

Assistant District Attorney Travis S. Anderson said a local jury in September concluded Rentas “tried to kill” a 27-year veteran officer, who was one of many officers who responded to a shots-fired call on Bethel Street.

Anderson discussed the shooting, but also statements Rentas made to police afterward, both at the scene and during an interview with Columbia police Detective Matthew Leddy.

Anderson called Rentas “entirely remorseless” for his actions and the “shocking callousness of his statements.”

President Judge Reinaker commended the brave officers at the scene that night and specifically Detective Leddy for keeping his composure as Rentas attempted to provoke him during the interview.

“It is absolutely and utterly disgraceful for anyone to behave that way toward law-enforcement,” President Judge Reinaker said of Rentas, while ordering sentence.

“Rentas is an unrepentant would-be cop killer with no place in an orderly society,” Lancaster County District Attorney Craig Stedman said after Wednesday’s hearing. “We appreciate the President Judge ordering a sentence that matches the gravity of the situation.”

Stedman noted that when the shots-fired call was dispatched every officer radioed rushed to the scene. In court, Anderson said the officers responded “toward danger” and the officer fired upon “put his life on the line to protect others.”

Chiefs of the three departments who had officers at the scene – Columbia, East Hempfield and West Hempfield – were in court Wednesday, along with several other Columbia officers.

Rentas did not apologize to any of the officers. He said to President Judge Reinaker:

“Mr. Anderson wasn’t there. You [referring to the judge] weren’t there. You don’t know what really happened. I wasn’t shooting at anybody, I wasn’t trying to kill anybody… I’m young. It’s not even where I wanted to be.”

Trenton Nace also was charged in the incident. He pleaded guilty in October and is serving 10 to 20 years in prison.

This is very sad for everyone involved. Young guys acting on impulse or what they see on TV and then the deed is done and unfortunately they never thought about real life consequences. Prayers for them and their families. Prayers for the officers involved as well!