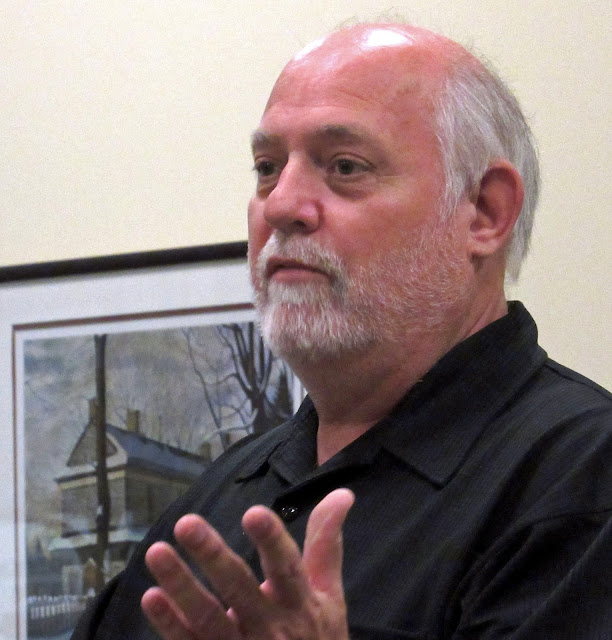 Rick Fisher took his message to Columbia Borough Council Monday night: There's crime in Columbia and something must be done about it.

Fisher, a Columbia resident, told council he was sparked to action when he learned of a 61-year-old man beaten in a wolfpack-style attack in the borough in September. Fisher said he was outraged, but decided to channel his anger into something positive. To that end, he started the Columbia PA Crime Watch Facebook page as a means for Columbians to report local crime. The page is an outgrowth of several meetings he organized in Locust Street Park where citizens gathered to talk about crime, offer ideas, and air grievances. Among the complaints voiced at the first two meetings: police response time, neighborhood drug dealing, surveillance cameras not working, and lack of personnel to monitor them.

Fisher asked Mayor Leo Lutz why recent arrests at an incident in Rotary Park were not made public. Lutz claimed that police reports are sent to the media. "It's up to the media to take the information from there and print it," Lutz said. "Every week, we put an arrest report out. It's up to the media to do what they want to do with it."[Columbia Spy and Columbia news, views & reviews do not receive weekly police reports from the borough but do report incidents posted on the Columbia Borough Police Department's Crimewatch page.]

Lutz told Fisher that the borough monitors its 50 cameras. He said footage is recorded, and officers can view cameras in real time in their vehicles. Lutz said that 14 juvenile suspects at the Rotary Park incident were identified from footage and arrested. Lutz also said that the Drug Task Force officer has made four major drug arrests for possession and intent to deliver in the borough, in which one suspect was observed on camera footage. Lutz added that eight youths who blocked Walnut Street recently were also arrested."The police are obviously doing something," he said.

Fisher suggested reviving a neighborhood watch program once active in Columbia. He told council that the program can reduce crime by an average of 16%, but added that if residents don't call the police, the program will not work.

Fisher vowed to return to council every month to see if progress has been made. In the meantime, he hopes to hold meetings at the Columbia Public Library. Over 500 residents have so far joined the Facebook page, which Fisher sees as a hopeful sign. Mayor Lutz promised that he and Police Chief Jack Brommer will work with Fisher and residents and will meet with them when the group becomes formalized. "We all want to see a better and safer Columbia," Lutz said. "We will assist the group in any way we can."

When is the next meeting

The next Borough Council meeting is Monday, November 13, at 7 p.m. at Borough Hall.
The next meeting of the Crime Watch group is yet to be announced.

Just an observation..........
-a locked police station door is NOT the answer. (have you tried to get into the police station in the past couple months?)
-NO dispatcher on second or third shift is NOT the answer.(police dept is locked up or down, it's always dark, no one is on duty)
-yes, WHO is watching 50 cameras 24/7?? (anyone?....no)
-remember WHO pays for Police.....wages, benefits, etc. WE DO!!! EACH AND EVERY TAXPAYING HOMEOWNER IN THE BORO. Is this HOW you want this police dept run...which YOU ARE PAYING FOR?? I DON'T THINK SO. *ATTEND BORO COUNCIL MEETINGS....NOV 13; DEC 11 IN 2017.
-we want the truth, we want answers. Perhaps the Chief should be required to attend Boro Council meetings.

yes i too am wondering why the police door is locked......