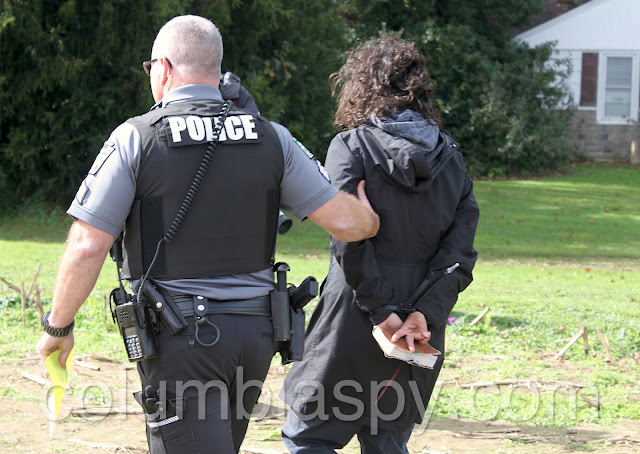 Sergeant Jacobs of the Columbia Borough Police Department made the first arrest at today's pipeline protest just outside Columbia. 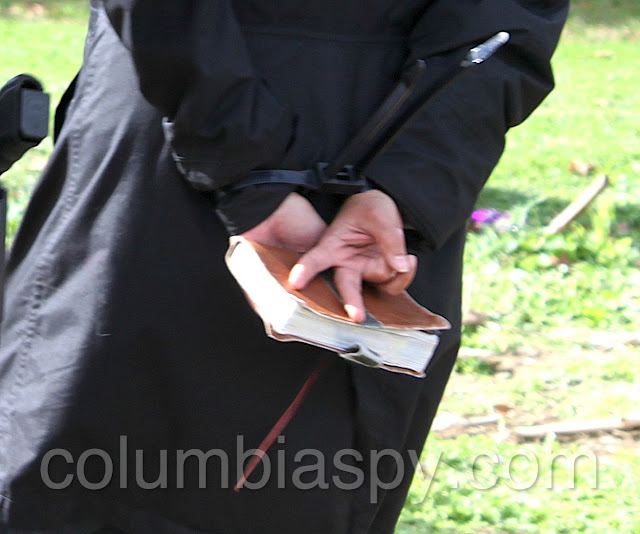 Note the protester's hand gesture as she is led away. 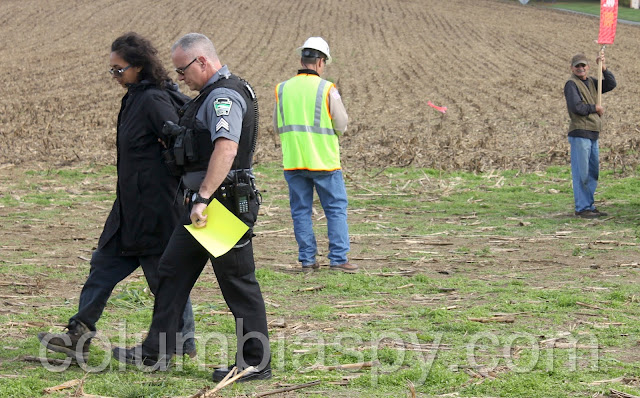 Singing protesters stood their ground Monday morning until police began arresting those who remained standing at a pipeline protest just outside Columbia. 23 protesters were arrested and charged with defiant trespass for attempting to block the path of an excavator on land owned by nuns at the Adorers of the Blood of Christ.

Police from West Hempfield, Columbia Borough, Manor Township, and Southern Regional were among those present, as were federal marshals.

Protesters who were not arrested met at the nearby chapel to discuss their next action.

Within half an hour after the last arrest, the chain link construction fence was already partially erected.

In July of this year, a federal judge ruled that the Williams Partners can condemn the land. The pipeline project was subsequently given the green light to proceed. 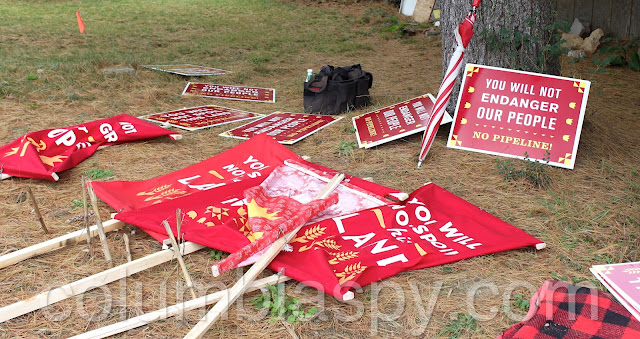 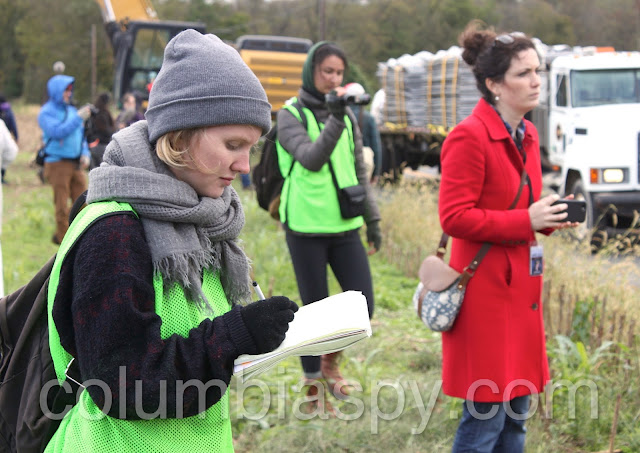 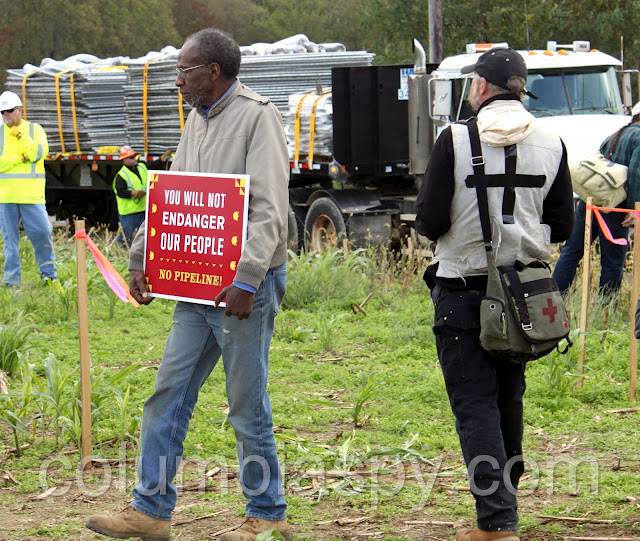 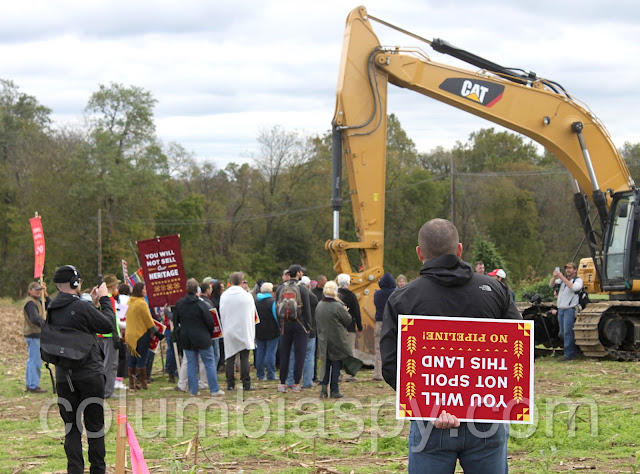 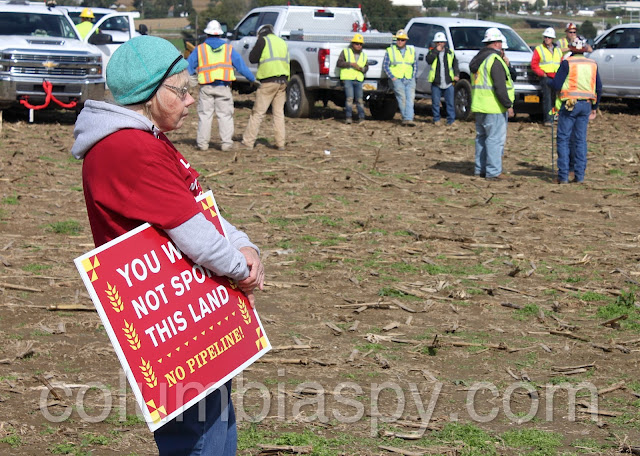 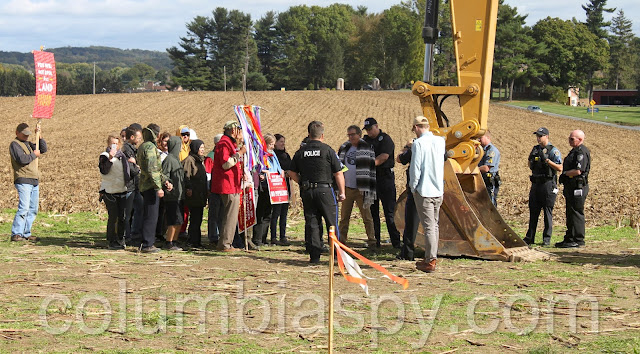 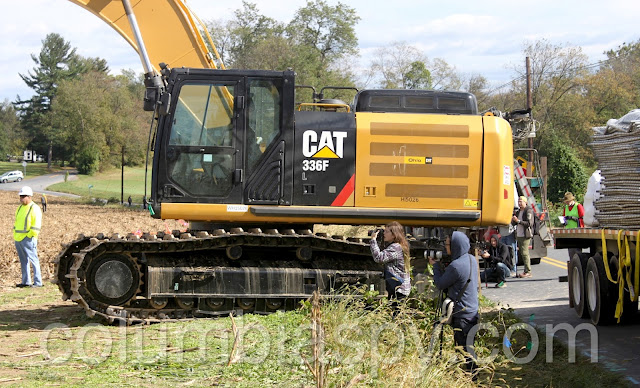 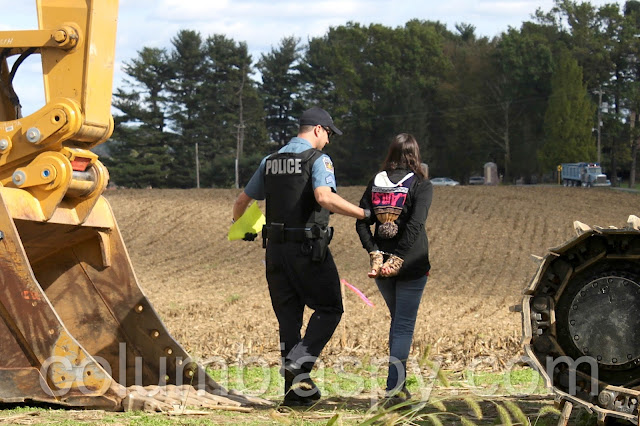 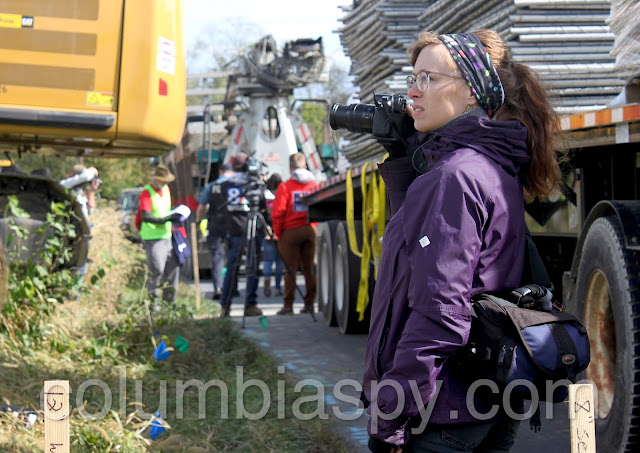 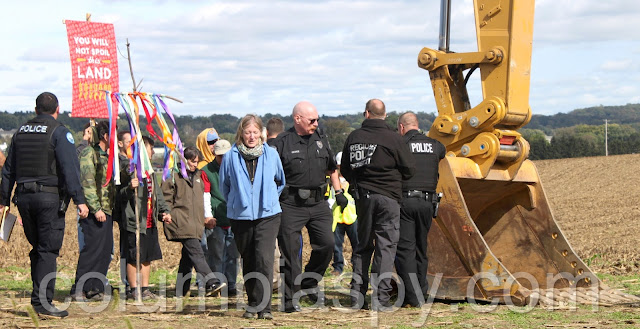 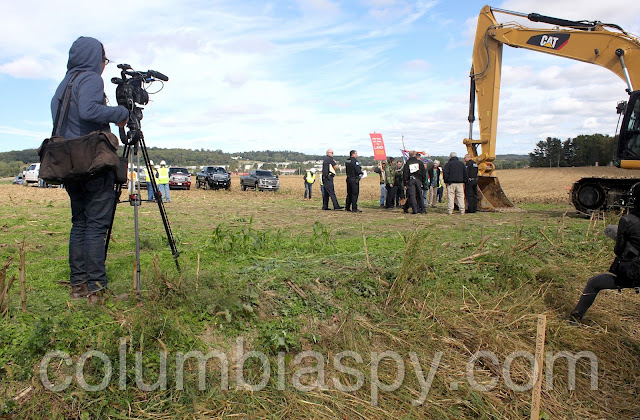 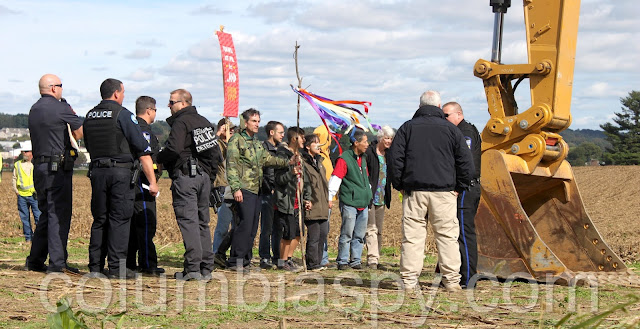 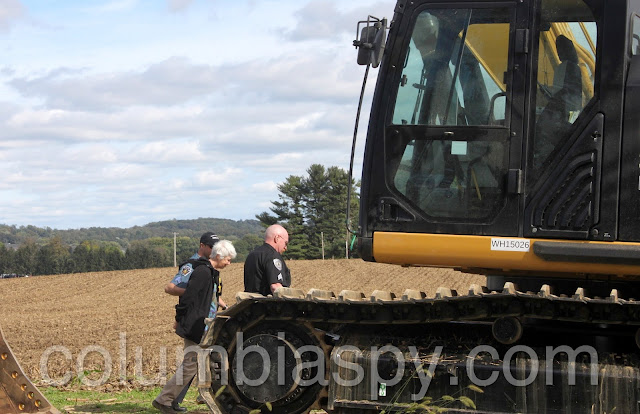 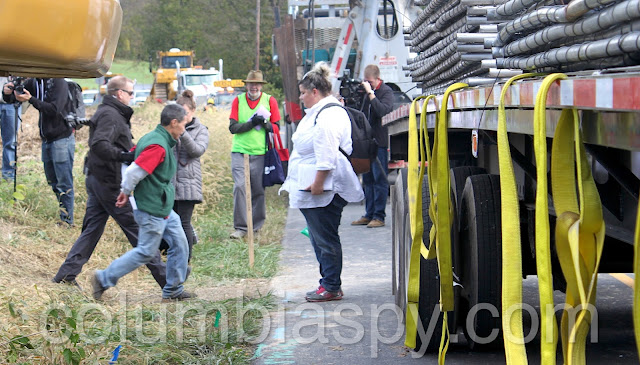 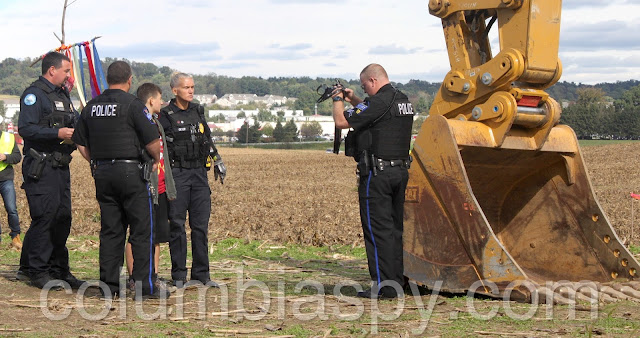 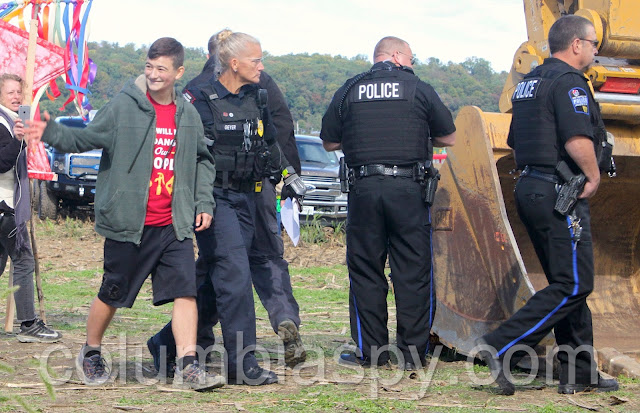 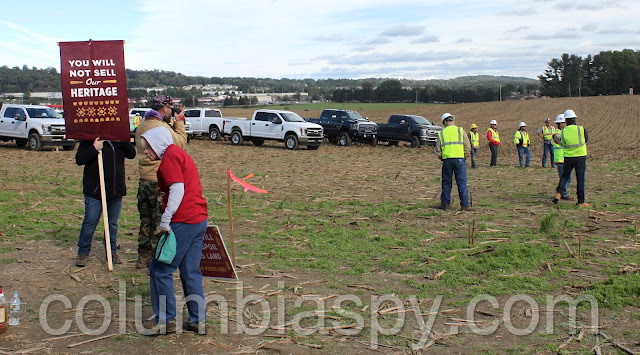 Why wasn't this "chapel" built years ago, but now. If it wasn't for the pipeline, it still and will be a cornfield. Chances are after the pipeline is laid, the chapel will be no more. If the supporters feel so strong, they should meet regularly at the site.

Will the chapel be open when the temperature is 20 degrees and 0 degree wind chill? I doubt it.

Here's hoping these "environmentalists" take time to clean up their trash as they leave. Pipeline protesters out west left a garbage dump behind once they were finished. Guess who paid to clean up after them?

Few people have the conviction it takes to fight for what is right to the bitter end.
Watching this group was both inspiring and sad. Inspiring that they did not give up, they stood up. Many of us would take the short term financial gain, foregoing the long term impacts. Easier to take the money and give up the struggle. Sad, in that we never actually own our land. Every single citizen should be alarmed by this, it could be your property next, perhaps for a different purpose, but regardless it could be gone. An injustice for one is an injustice to all. Rise to action and support each other.
Sharon Lintner

This is a perfect example of how much freedom we really have; none. Land of the free my ass....

Government has been taking land for centuries for many different reasons. Protests have been going on for as long. The only difference is the 24 x 7 news cycle bringing attention to it. No freedom, really?? Wow!

exactly. this is outrageous that our hard earned taxpayer money is paying our local police to arrest these protesters. remember, it ALL will affect each and every one of and our children, our grandchildren, etc. there will be NO uncontaminated water. there will be oil spills, leaks, etc. Kudos to those who stood their ground. shame on local police (NOT even Columbia Boro i might add)Whatever happened to the Constitution. Our freedom of speech, etc. This is BS. JUST WAIT TIL THE GOVERNMENT WANTS YOUR LAND...FOR FREE. EMINENT DOMAIN. THEN YOU'LL BE CRYING A DIFFERENT STORY.

yes why our the Boro police in West Hempfield???? now, they can afford to support their police. we can't. i agree. this whole pipeline thing is unconstitutional. and eminent domain? well, if they choose to take YOUR property, then what...sorry for you?