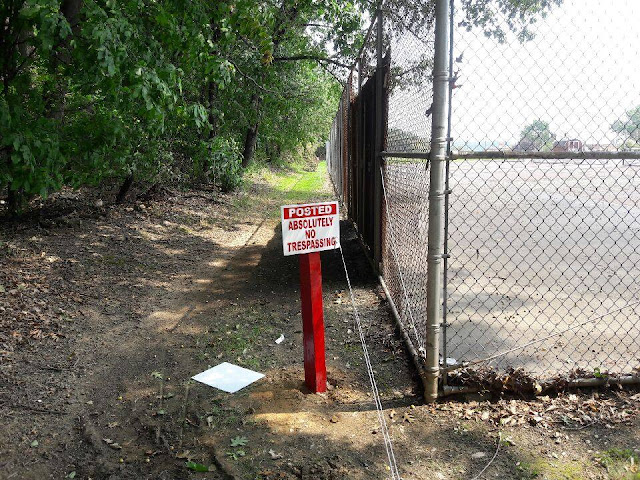 Columbia Spy previously reported HERE that the owner of a property adjoining school district property at Columbia High School had blocked a path and posted "No trespassing" signs. The property owner responds here:

As the owner of the adjoining property I would like to state that the signs only went up in response to a phone call I received from the School District Director stating that I needed to move branches from the path that I had just trimmed. This reaction is in response to him stating that the property belongs to the school district, where it does not, and an ongoing concern I have to the school district pacing a "storage container" along the tree line on the practice field. This storage container is a rusted old freight container they are using to "clean up the place."

I have had several conversations with the director and ask that it be moved further down the tree line, as they placed it in view from my home. The agreement was that it will be moved and painted. Yet there it is, weeks later, not moved and not painted. Now, my house going on the market has nothing to do with this, but if anyone was interested in seeing the property when it does, how will that look to a perspective buyer? How would that look right next to your home? The fact is, the signs would have never gone up if they would just do what they said they were going to do and move the eyesore.

I think what upset me the most is when one of the school grounds workers told me "if the taxpayers would pay more to the school, we wouldn't have to use this". That should be an insult to everyone in the town

WELL I understand your point of view. IF someone falls on your property and breaks a leg who is Financially liable?

School district may have adverse possession rights to it, though. (Google it if you don't know what that means). But let's examine this bit of information:

" Now, my house going on the market has nothing to do with this, but if anyone was interested in seeing the property when it does, how will that look to a perspective buyer? How would that look right next to your home? "

Ok, so they say that putting their house on the market has nothing to do with it, but in the same sentence they state the complete opposite. Why bother being hypocritical? If you're worried that the view of the storage trailer will hurt your house being sold, then be honest about it.

Sounds like the School District Director ....over promised and under delivered ...as usual.

Good ole Tommy Boy. No matter where the property line maybe it's sounds like Tommy making promises he know he can't and will not follow through with....not the first time he done that. Maybe we fix it like we fix everything thing else. Where's your Columbia Pride. ..that statement is no longer a fix. My Columbia Pride ended in the late 80's.

Thank you for sharing Lisa. So glad that you made it public that you won't allow the school or DOO to bully you. Stand your ground,we need more people like this to let everyone know the backdoor BS that goes on.