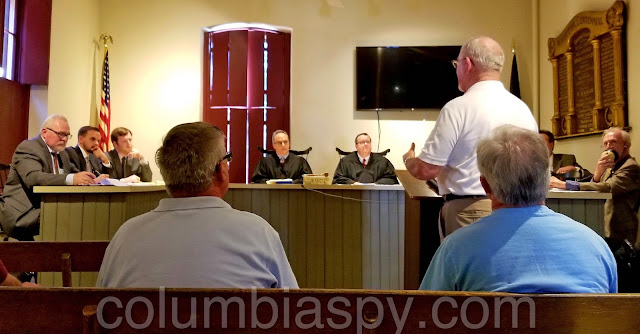 Columbia Borough Council President Kelly Murphy and Mayor Leo Lutz questioned the Columbia Water Company's recent request for a rate increase of just over 13% at a hearing on Wednesday.  Murphy and Lutz spoke under oath at a hearing conducted by the PA Public Utility Commission's Office of Administrative Law Judge at Marietta Borough Hall.

"It appears to us the Columbia Water Company is attempting to raise the profits for the stockholders on the backs of Columbia residents without making any significant capital contributions to the water system," Murphy said.

Mayor Lutz asked how the proposed rate increase and the surcharge added several years ago just prior to construction has impacted stockholders and the profits of the Columbia Water Company.

There were only six Columbia residents (including Murphy and Lutz) present for the hearing and a second hearing that evening.

According to the PUC, the request submitted by Columbia Water would increase operating revenues by approximately $923,668, or 17.8 percent. Under the company’s proposal, the total bill for an average metered residential customer in the Columbia Division would increase from $399.48 a year to $452.04 a year. The average annual bill for metered residential customers in the Marietta Division would increase from $318.48 to $452.04 (based on an average residential usage of 3,700 gallons per month with a 5/8-inch meter, and not including any PennVEST surcharges).

On August 3, 2017, the Commission voted to suspend the rate increase request for up to seven months and assigned the case to the PUC’s Office of Administrative Law Judge for investigation. Their testimony will become part of the record on which the PUC will issue its final decision in early 2018.

There's gold in it for some.

Mayor says residents cant afford it. Well what about the school tax and local tax? People cant afford them either. Another increase that will put strain on the senior citizens that grew up during tough economical times. Soon Columbia will be 100 percent renters. Senior citizens will be financially squeezed out of Columbia and family's that can afford it will leave the declining town while they can still sell there home while young families will not even consider Columbia for raising their family. Good luck to the ones that are going to tough it out, my family and I are now on 2 acres with less tax than I had in Columbia with a small lot.

They need the raise in rates cause the "private owners" (we know who they are) want even higher dividend payouts. Total greed!! And no they don't improve anything. Cannot tell you how many houses have no water pressure, mine included. They try to tell you it's the pipes in your house...a total line of bull every time!!