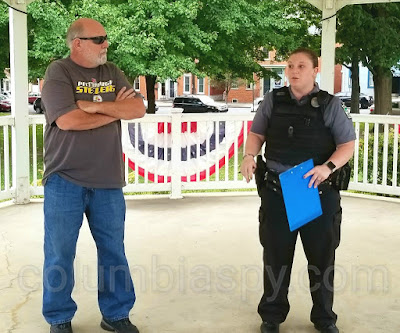 Over two dozen concerned citizens met at the gazebo in Locust Street Park Monday to voice concerns about crime and violence in the borough. Columbia resident Rick Fisher set up the meeting and was joined by Officer Amy Dittman of the Columbia Borough Police Department.

Fisher said last week's wolfpack beating of a Columbia man was the tipping point for him to get involved. He stressed, however, that the meeting was not about vigilantism but rather a means to seek solutions.

Several citizens talked about drug dealing in the borough and told Officer Dittmann that the intersection of 6th & Walnut Streets is a hub of such activity. Citizens also discussed last week's melee involving about 40 middle and high school students at 7th & Walnut, among other issues.

Officer Dittmann advised calling 911 County Dispatch to report an incident and said officers are often en route as soon as calls are received. She noted that Columbia will not have its own dispatcher in the near future due to the position being eliminated. Part of the local dispatcher's duties involved watching borough camera feed.

Many in the group said they want the meetings to continue. Fisher said he would like to invite Police Chief Jack Brommer to a future meeting. Citizens also suggested taking concerns to borough council.

Afterward, at Monday night's borough council meeting, Mayor Leo Lutz said he would have met with the group if he had not been at another meeting. He said he is willing to meet with them in the future. 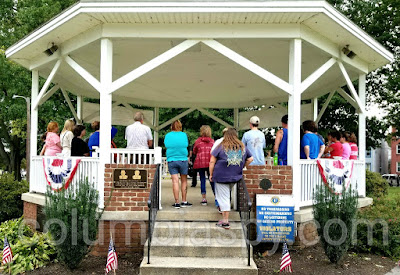 Over two dozen residents met at the Locust Street Park gazebo.
Posted by Joe Lintner at 10:53 AM

In this town there is a shared ignorance and even when the facts are explained, they are ignored or denied. It's difficult to determine if these people like "not knowing" or if they really just do not understand.