Couple blames borough for flooding on their property 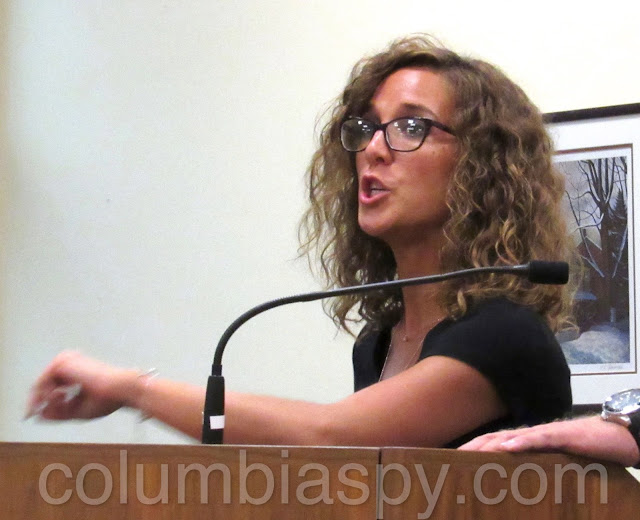 Lindsey Brenner tells council Monday night that a drainage problem at her 1020 Cloverton Drive property is the the borough's responsibility.


A Columbia couple angrily confronted borough council Monday night over an ongoing dispute about a retention basin on their property. At issue is who is responsible to fix a drainage problem with the basin. The couple, Tim Hess and Lindsey Brenner, claim stormwater often floods their 1020 Cloverton Drive property due to an improperly placed drain pipe. They believe responsibility lies with the borough to fix the problem.

Armed with documentation and photographs, Hess and Brenner said that despite appearing at three council meetings over the last four months, they have not had their concerns addressed. "I want to ask you, if this was in your backyard, if you would be okay with it, because you wouldn't," Brenner told council.

Hess said he cannot address the problem himself, because part of the pipe is under the state's jurisdiction. He said that if he would attempt a fix, he would get fined, because the pipe "goes into PennDOT."

"How do you want me to fix a borough and state issue?" Hess asked council. He also said that a retention basin should be able to be mowed, noting that six- to seven-foot cattails are growing in the basin.

Council President Kelly Murphy explained that the borough is not responsible for maintaining the basin. He suggested their attorney contact the borough solicitor. Brenner asked why they should have to spend $3,000 to hire an attorney to have the borough fix a pipe.

Brenner said a letter she received from Public Works Director Ron Miller acknowledges a problem with the basin, specifically a water problem on the surface and a drainage problem. The couple said the borough's engineer told them that no record exists of "how the basin is supposed to be." 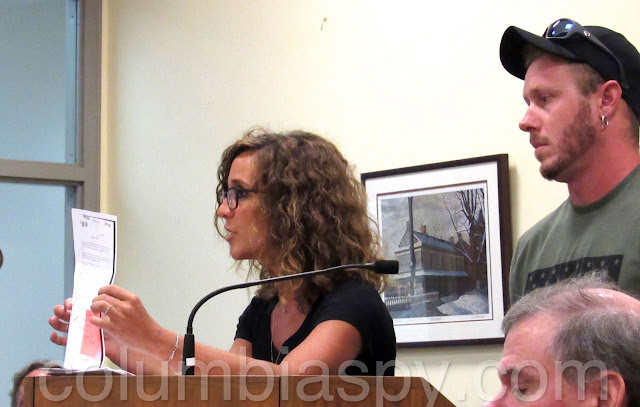 Lindsey Brenner, with husband Tim Hess, shows a document to council supporting her claim of responsibility.


Brenner cited a document from the Lancaster County Recorder of Deeds stating the problem is the borough's, because the pipe and the drainage are specific to Columbia Borough. Brenner said information on the street's dedication is somewhere in borough meeting minutes from that date.

Brenner argued that a legal binding document was filed with the county when the signed the deed for the property. Borough Manager Greg Sahd, however, pointed out that the document was not signed by the borough. Borough Solicitor Robert Pfannebecker agreed with Sahd, saying that somebody else put that language in the deed, which the borough did not agree to.

"It's a legal argument that should be resolved by your attorney talking to us." Pfannebecker said.


Lindsey Brenner chides council about
having to hire an attorney
to fix a drainage problem on her property.


More information on this issue, including a video of the affected area, can be found at Columbia news, views & reviews HERE.

Ever time something big comes up at the borough meetings i guess you should bring your attorney there also!!! What a shame for this town!!

In the audio of Brenner and Hess, Brenner keeps on stating the blank looks on the Borough Council members. What a disgrace that not one would stand up for this tax paying citizen on a resolution. Why are you Councilors seated? Fix the problem instead of sitting on your hands. At least give these fine citizens a trolley pass when they cannot walk due to the West Niles virus.
Crumbling Columbia signing out.

I encourage both parties to read up on storm water management. Simply stated storm water management is the responsibility of the municipality. Storm water run off comes from home improvements, building new homes, shopping centers, paved surfaces, ect. All these buildings and improvements must get a permit from the municipality, so basically the borough allows people to build thus creating storm water. Unless the borough has some document proving that a private party is responsible the borough is responsible. For the pipe attaching to Penndot structure there should be a permit filed with the state. Before I hire a lawyer I would contact state representatives and the DEP. Columbia is not the only municipality that attempts to dodge the bullet on storm water management. Where is all the water coming from? I assume it comes from the streets, driveways, rain spouts... all within the borough.
if my memory is correct Manheim Twp. and Lancaster City have already been fined for storm water management. There issues were considerably bigger than yours. If you have to get a lawyer retain one from outside of Columbia.

Its a retention basin at the end of a street at the bottom of a steep hillside - its supposed to flood. That's why I wold never buy a house near a retention basin - works now but, who pays / maintains it 20years later when $$$ are needed. In this case its most likely a PA DOT issue since Rt 30 is there.

I distinctly remember residents of the Ironville Pike area going before council years ago to complain about water run-off due to the development of Cloverton Drive.

Unfortunately I do not know what the outcome was or if this retention basin was in place at the time of those complaints.

It might be worth talking to other long term residents to see if anyone can recall the installation.

In addition to flooding concerns, I believe that mosquitos would pose a health risk.

How do you expect the borough the spend money on something thats inportant?? The funds in columbia are getting low, and columbia still has trees without grates around them??

seriously. the problem EXISTED when the property was built and therefore purchased. should be
the homeowners responsibility.

Thats not right. The borough is responsible to ensure the requirements of MS4 (municipal separate storm sewer system) are met, such as developers submitting plans, developers or property owners maintaining such systems, etc. They are not responsible for the upkeep of every storm water system in the borough.

You are correct that Lancaster City was fined for violating MS4 because they allowed the the city owned/maintained storm water system to drain into the sanitary sewer system. In the case of discussed, the system is on private land.

In this case, the borough's MS4 official should be investigating though it sounds that he/she is not.

wow. WHY would you purchase a property that's located there? YOU didn't do YOUR homework. it's NOT the Boros responsibility. IT"S YOURS

i agree with the others. WHY would you buy that property. it's your mistake. NOT the boro's.