Columbia students will not have indoor recess during eclipse 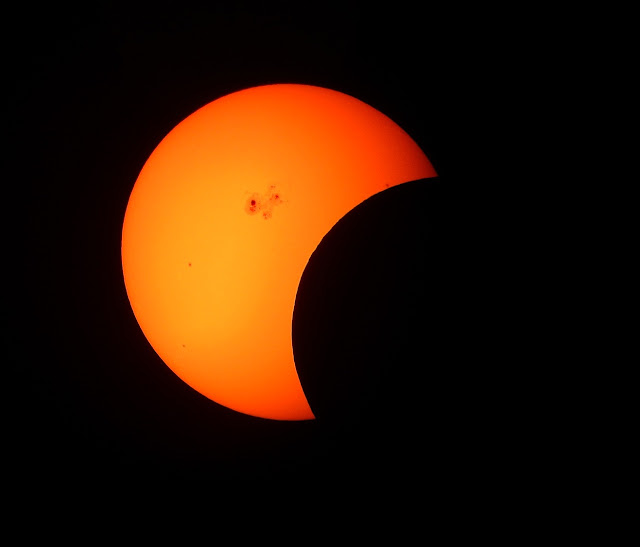 At last Thursday's school board meeting, Superintendent Dr. Robert Hollister addressed the district's plans for the upcoming solar eclipse on Monday, August 21. Hollister announced that students in the Columbia Borough School District will not be held inside for recesses, unless parents make such a request. Hollister said the danger of looking at the eclipse is the same as looking at the sun on any other day. "There's no significant danger to students if they're outside," he said.  Students will be dismissed at the normal time on Monday.

According to the website timeanddate.com, a partial solar eclipse will begin in Lancaster County on Monday, August 21, at 1:18 p.m. It will reach maximum at 2:42 p.m. and end at 3:59 p.m., for a total duration of two hours and 41 minutes. The website also features an animation simulating the eclipse.
Posted by Joe Lintner at 1:05 PM

Mr Hollister somehow believes he is smarter than the experts that study all about this. I think we need to make him go out and stare at the sun and see what happens to his eyes! I betcha' he won't do it!!!

So can the sun if you look directly at it for to long..

Hope Hollister is right. If not, the school's liability insurance could be tested. Experts are saying not to look into the sun during the eclipse. If fine institutions like the North Museum sky watchers are giving out glasses to view,then what are the danger factors. I would rather be safe than sorry.

Some schools are getting out early, for this event, but hollister knows best!!! Lol

Come December he will be gone and CBSD won't have to worry about this stupid stuff anymore.

But isn't recess before the partial eclipse even starts? Why hold them inside if nothing is going on at the time they should be out?

It may be the same as looking at the sun any other day.. but most people do not stare at or focus on the sun. On any normal given day, people might inadvertently get a glimpse of the sun but they quickly shift there eyes or look away.. unlike with an eclipse where people try to focus on the sun & moon eclipse. So the chance of eye damage is greater. than on

It actually starts around 115pm, with the 70% coverage (our maximum) at 242pm. Then it will begin to pass and will slowly return to normal by 4pm. So depending on recess some kids will be out at the beginning.... also the kids will be walking home shortly after the peak time..
The tendency to stare at it, is much greater due to the phenomenon of the sun being partially blocked. These are kids we are talking about.... telling them no isn't the answer. Would have been a great idea to have something set up for all the kids to view- great live science and great learning opportunity!!!! But I guess that educational opportunity will pass our kids by. We are the only school starting today, everyone else pushed it back due to the liability that could be involved. Plus do we want our kids that drive to be driving home in this kind of event, with so many people focused on the eclipse and not paying attention? Or our walkers walking in semi darkness with distracted drivers trying to view the eclipse.... Yep Hollister and company have great ideas for Columbia....

what a freakin waste.......shut down these schools. now.

Now that it is all over, were any children blinded?

And we all know kids come equipped with common sense, so no worries there.

To all the astronomers who have weighed in with their opinion on this forum I will have to disagree. First the actual eclipse was not happening during recess time. Second, the entire seventh grade did do eclipse activities at the end of the day during their Back2 class so the opportunity was not wasted. Thirdly, if students are imparted with wisdom from their elders and chose to ignore it and then the elders are held liable then we are all in grave trouble. For example, we tell our kids not to do drugs. Yet they do. So if I were to tell a student not to do drugs and they decided to do drugs I then should be liable. That seemed to be the line of reasoning I saw expressed in a few of the other posts. All the students were instructed to not look directly at the eclipse. This was sound advice that should be headed. We should not work ourselves into frenzies over every single issue. I am sure if the decision had been made to use the first makeup day to move the start of school there would have been cause for complaint from some of the same people.

Why was Columbia the only school in the county starting on Monday??? All the other district start Tues or Wed, some not till next week or the following.

I don't think one is blinded on the spot or that man living in the white house would have a guide dog today. The damage is insidious.