Columbia School Board looks at merger, other options, to address financial woes

The Columbia Borough School Board recently looked at several options to address the district's financial woes, including the possibility of a merger with another district.

For Option 1, the board voted Thursday night to order a "white paper" outlining the requirements of a merger. 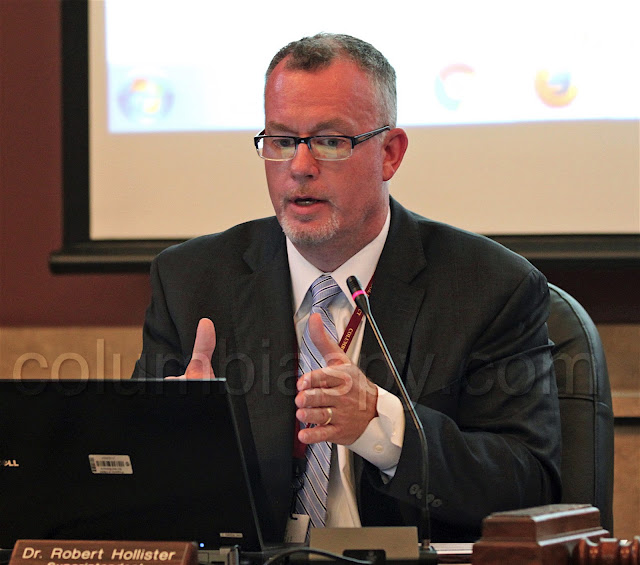 Superintendent Dr. Robert Hollister expressed reservations about the idea, however. "I think merging is an almost insurmountable idea. There's no question that Columbia Borough is in a delicate situation financially. The partnership with Eastern Lancaster County is helping that tremendously, at least in terms of bringing in expertise."

Hollister added that Hempfield is not interested in taking Columbia. "I had an informal conversation with the superintendent this summer, and he was like 'No, that's not going to happen.'"

Despite his reservations, Hollister suggested that, as Option 1, the board authorize the solicitor to create an analysis of the requirements of a merger. "I think once folks see that, it's going to be pretty obvious that a merger is not going to be the first choice solution," he said.

Option 2, according to Hollister, is a state takeover. He said that is "not a pretty situation" at all. In such a circumstance, the board's authority would be taken away on all financial matters, and the state would dictate the amount of tax increase. He said those tax increases would "shatter" anything the board has done. "They have the authority to eliminate any high salaries they so choose, highest paid salary teachers, administrators and hire lower salary. That's not a desirable outcome," he said.

Option 3 is to continue with the partnership. Hollister said that the choices are not great for the future of Columbia Borough unless the partnership can be made to work.

The board voted unanimously for a "white paper," an analysis of requirements for a merger, to be drawn up up by Solicitor Mike Grab.

A resident asked the board: If the per capita tax is not eliminated, what's being done with regard to collecting it, to make it fair to everyone?

Dr. Hollister and Business Manager Keith Ramsey weighed in on the answer, saying that many school districts in the county have eliminated the per capita tax.

Ramsey said he thinks that Columbia and Ephrata are the only districts that still have it. He acknowledged that there is an inability to collect from some residents and that it is not a fair system. He added that no one is going door-to-door to do a true census; all that's currently being done is mailing the census.

According to Ramsey, the per capita tax is bringing in about $50,000 in revenue to the school district.  Eliminating this tax will be looked at this year.

Business Manager Ramsey said the final numbers are not in yet. "We have to re-set the tax rate lower based on the increase in assessments, so at this point it's not clear to say what's going to happen," he said. "There will be more detailed information this fall after the appeal process is finalized."

A resident asked about the shared leadership with ELANCO: "Is that going to go for another year now?"

Hollister said the issue is still undecided and is under discussion.
Posted by Joe Lintner at 8:27 PM

A merger has not happened, at least in part, because no one in authority wants to address the issue.

It's that Columbia Pride mentality that's killing the borough.

All we have ever heard is no one wants Columbia. Get some serious discussion behind the idea. This "white paper" is designed to appease those taxpayers that are disgruntled.

There will be no choice for the state but to get involved in this matter. The antiquated way this state has been operating at has come to the end. These small taxing districts cannot sustain themselves. All of the previous politicians have kicked the can down the road not wanting to make the hard decisions. Well now those decisions have to be made because all of these entities are at the last stop or close BANKRUPTCY. Cola school district has $250,000 left in savings. They used $400,000 to balance this years budget even with a big increase on taxes. They are Deffinitely at the bankruptcy stage weather they want to admit it or not. There is only 2 options state takeover or merger.

Interesting that Hollister doesn't want a merger.... loss of his job and high salary.

The second point is that Hollister appears to say anything to keep this so called partnership intact because his school board at Elanco now knows that this was a bad deal for them.

The third point is that a nearly bankrupt school district cannot and should not pay a director of operations $94,000 plus...to just come to work each day. That is almost twice what the head tax brings into the budget.

here's a couple things. who cares? let the state remove all the highest paying jobs. for Gods sake we only have a few hundred kids in all our schools. and yet it costs us $5,000 a year in taxes!!!! who cares what Hempfield thinks or wants. next, you MUST TAX EVERY SINGLE RENTER/TENANT IN THIS BORO AT LEAST $1,000.00 PER YEAR. that's a huge part of this problem. the boro has more than 800 rental properties. that's NOT counting apts each. and us hard working middle class have to pay not only for our own kids but all the renters andtenants kids. they pay NOTHING. ). zip. nada. zilch.

Columbia is not paying Hollister a salary, just mileage, cell phone, etc. However, Columbia is paying a salary to a different ELANCO employee: Tom Strickler.

Where is the $164,000 contract money going?? Will that go up this coming year? Will they jack us?? Wait they already did!

Columbia is paying Elanco so that they can pay Strickler. It is illegal for Columbia to pay Strickler directly...and Elanco is paying him whatever salary that only Hollister himself decided that he would be paid.

The State Department of Education cannot simply tell Hempfield that Columbia is going to merge with them. It does not work that way. For such a merger to occur it would have to be passed, as law, through the legislative process of the state house and senate then signed by the governor. The last time this happened was back in the 60's. I doubt the legislature would take up the issue of a single school districts problems. The state legislature needs to look at the state as a whole, as they did in the 60's, and consolidate districts again. There has been talk of this over the last 10 years but nothing has come from it.

As for the partnership with ELANCO, I have not seen or heard of a report detailing the benefits we received from this partnership over the last year. Maybe I missed it but it seems we are not saving much, if any, money in this deal.

until the true Columbians attend a school board mtg and DEMAND accountability and stick together...NOTHING will change. We MUST attend the mtgs and TELL the School Board that we are DONE. D O N E. Done. Fire EVERY asst super, every super, principal, asst's, etc who make almost $100,000 a year. We are done. Finished. TIME TO CONSOLIDATE. LET THE STATE TAKE OVER.

The "powers that be" talk their way around the hot topics. They feed it to the taxpayers in a way that disguises the true flavor of what they really have to swallow. They make it sound better than it is, just like when Klawitter said we would get grant money for the ELANCO shared services, even showing the taxpayers a special pen he received. All he got for Columbia was the pen, NO grant money.

When you attend meetings you must be prepared to stand your ground because they are going to twist what is actually happening and make everything sound perfect. Pandering to the taxpayers.

Everybody in town needs to put their house up for sale. Not many people will buy a house in a town where everybody is selling. Property values will fall and the tax base will collapse.