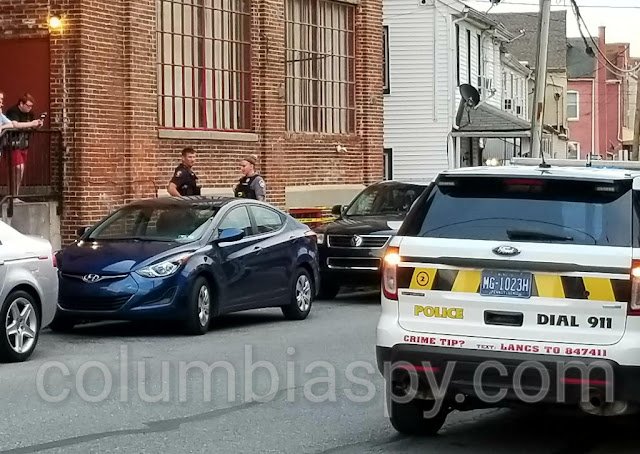 Police responded to a report of shots fired at South 3rd and Union today at about 7:15 p.m.  The approximate location of the incident is shown in the photograph where the police are standing. Witnesses at the scene said there was an altercation between two young men - one with a baseball bat and one with a handgun. Reportedly, seven to eight shots were fired, hitting several vehicles, before the gunman fled. There were no reports of injuries. Police canvassed the area for suspects.  Multiple departments responded:  Columbia Borough, East and West Hempfield, Susquehanna Regional, Mount Joy Borough, and Manor Township.
Posted by Joe Lintner at 8:59 PM

Isn't that a Bigler property?
Very sad for the new tenants that just moved in. They had no idea what goes on in this area.
Good job to the fire police who are still at it, 10:22 pm.
With the high number of residents in that area, someone knows something....

That IS a Bigler property... My wife and I moved out of there in September... This doesn't surprise me in the slightest...

So this had nothing to do with the kids that were shooting at cars up Union St/4th earlier in the day? It is a isolated incident?

Give the kids something to do in this shit hole town. 11 more days here and im out.

What does it matter who owns the property?? It obviously happened outside!! I guess that makes the columbia borough highway departments problem!! The bottom line is 2 piece of shit kids were being pathetic, most likely they are not from columbia, and they are prob, some section 8 losers , that dont belong here!!!

What happens when the renters all leave and you have to foot an even larger tax bill? Picking on renters is not an acceptable way to take care of this problem. While I understand that the crime is ridiculous, it isn't fair to anyone who rents a home here with no problems. Knowing this town's past 20 years, it is a plethora of crap that the mayors, town council, school council and longtime residents have done to make Columbia the shithole it is today. Pushing people out is not the answer to creating the perfect Eden that you all strive for. Of course, Columbia has proven to be a master at pushing people out for various reasons. Maybe the answer lies in this: Consolidate the school district and let the county/township absorb the town. Maybe the Columbia area will finally grow up and find some acceptable leaders.

The borough will take the blunt of the cost as said in the Bigler property on Locust st.

I have given renters a chance, but not anymore. Unregistered vehicles parked on property, cars on lawns, doors and windows broken out, trash and cigarette butts everywhere, and out of control kids. I'm sick of it.