Old building gets a new life 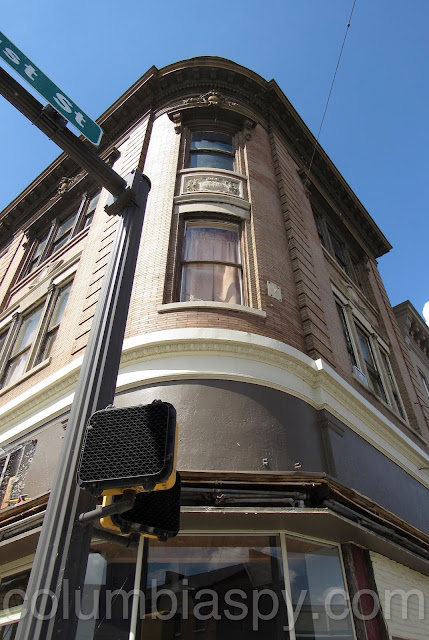 Once again, Don and Becky Murphy are giving a facelift to the downtown - or at least part of it. The Murphys, through their company Cimarron Investments LLC, have committed to a major renovation of the building at Third and Locust that many Columbians remember as the Jack Horner shoe store. The Murphys plan to put on a new roof, install an elevator, and replace first-floor windows with full-length ones. The building will be renovated inside and out, including existing apartments.  Current occupants will be moved to other units in the building as their apartment comes up for renovation.

When the project is completed, the Murphys hope it will resemble Eagle Hall, a men's and boys' club that once occupied the building. However, existing awning hardware can't be used, because new windows won't be compatible. New awnings will be installed at a later date and will resemble the ones at the Marriott Hotel in Lancaster.

Target date for completion is mid- to late fall of this year, according to Don Murphy. 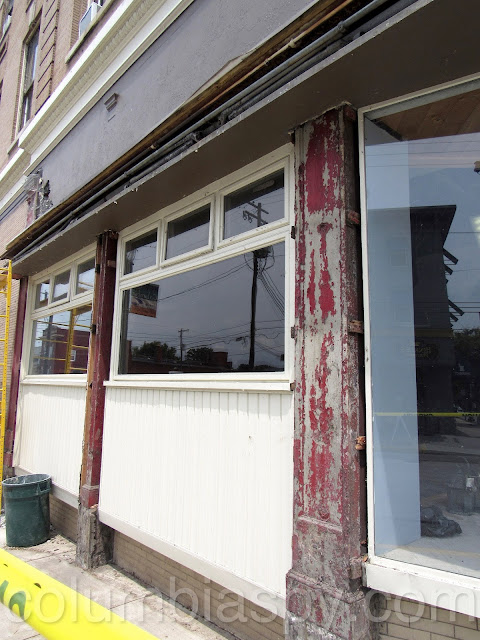 Workers have removed some of the building's facade, revealing the original steel columns (shown in red). 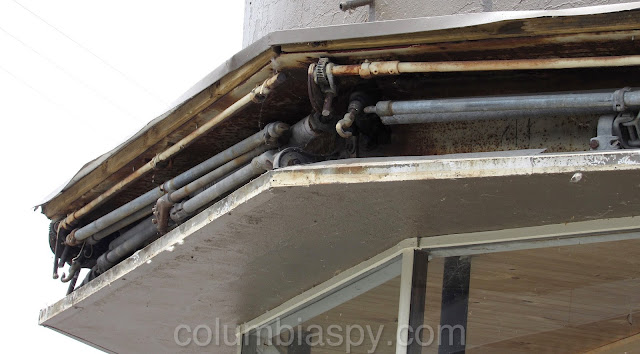 Existing hardware from the original awnings was recently exposed by workers. 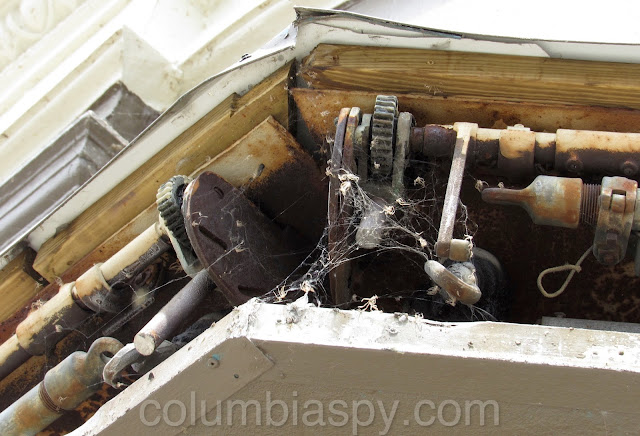 A close-up of the awning hardware 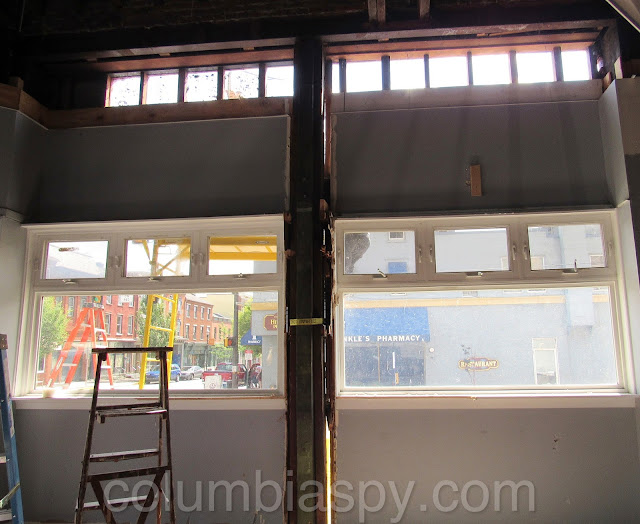 A view from inside.
These windows on the first floor will be replaced with full-length ones. 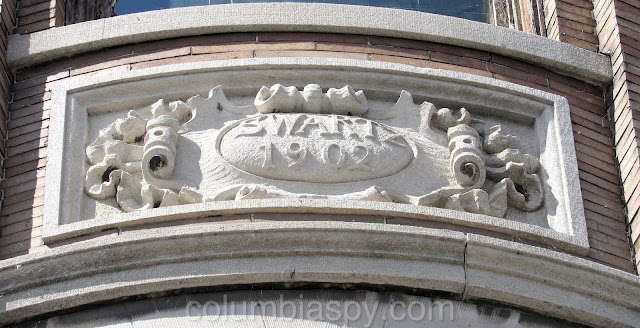 This insert on the building reads: "SWARTZ 1902" 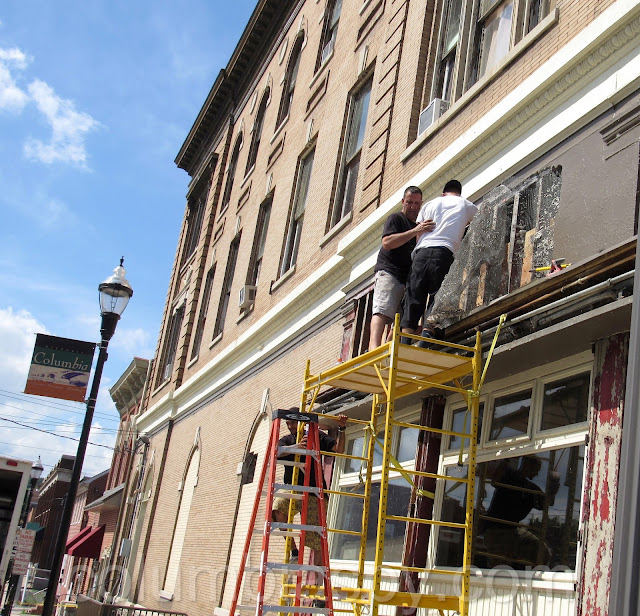 Workers removed sections of the building facade this week. 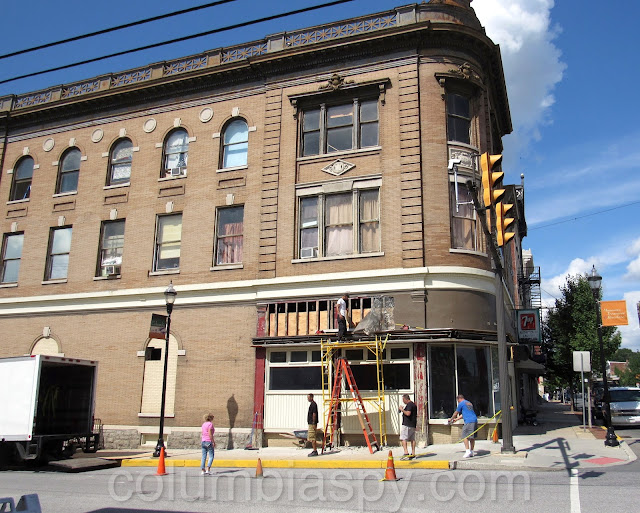 Becky Murphy (in pink shirt) looks over the project. 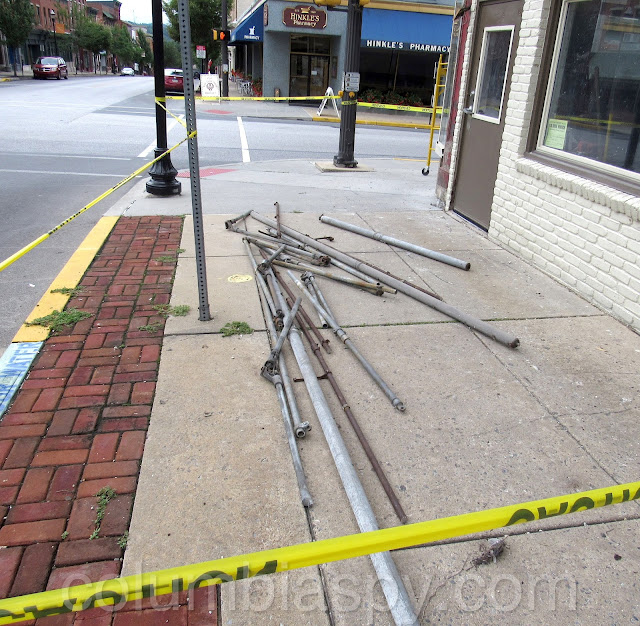 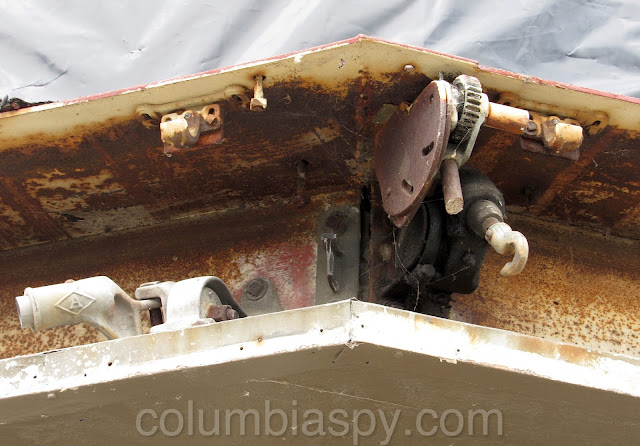 Leftovers after hardware was removed. 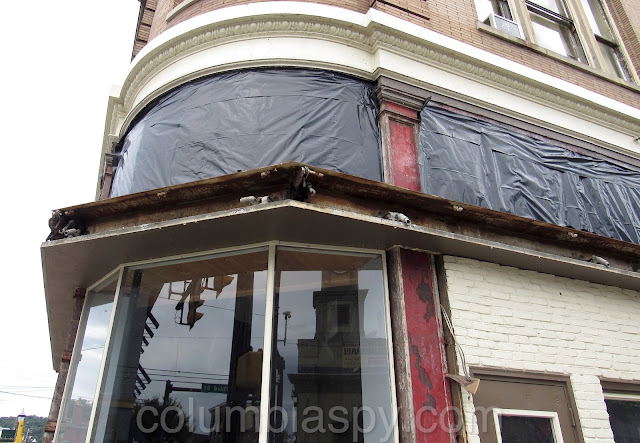 Exposed areas were covered with plastic on Friday to protect them against rain. The track near the middle of the photo is nearly bare since hardware was removed.
Posted by Joe Lintner at 5:57 PM

Hats off to Don and Becky for undertaking this project. It will beautify that corner. Hopefully, by your renovation, others will catch the spirit. All the projects you do are top notch.

thank you to the Murphy's for cleaning up & beautifying the downtown! and you's do an amazing job. thank you!
on another note....hope the Bank Museum is FORCED to remove the ugly plywood. 15 years or more is to long to allow this ridiculous nonsense. you should be ashamed.....you could actually do regular tours and make the money to finish the doors.

That plywood is now historic in its own right. Probably have to get HARB approval to remove it at this point.

Narrow minded opinions, yeah!
Maybe as Council seeks more Grant Money, there will be help for the Museum.
Hey maybe help for more than personal agendas.
The Museum is Awesome ASSET to Columbia

Not one bit, Frederick.
But please, your facts seem to be an opinion.
I say Restore Columbia, and if it takes time, so be it.

Why should the borough be seeking money for a private museum? Let them apply for their own funds.

You's??
Are Yins going to tour the museum?
The doors must be restored not replaced, care to donate?

Council finds money for private agendas, why not the Museum?

Tell that to past and present Council Members. They continue to choose wrongs but say they are Right.