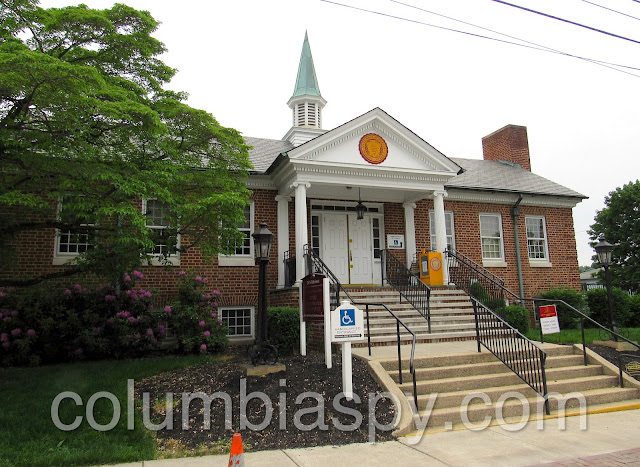 According to two board directors, Kathleen Hohenadel and Charles Leader, the idea of a move was suggested at this month's Columbia Borough Community Development meeting. Hohenadel said the issue was announced at the meeting as if it was a "done deal." She said Borough Manager Greg Sahd stated that Tom Strickler, the district's director of operations, told him that the school board is in favor of the move. Strickler refuted that notion, however, and told the board that he never said that. He said he told Sahd that he needs to contact the school district and that the board may be open to have the discussion. He added that he told Sahd to email the school board president.

A joint feasibility study might be undertaken to determine pros and cons of the move.  Hohenadel said the borough has put out a Request for Expression of Interest (RFEI) for borough properties including the Municipal Building (Borough Hall), the Market House, and the former Columbia No. 1 Fire Company building on Front Street. If all aspects of the plan fall into place - among them, the Municipal Building finding another use - borough offices theoretically could then move into the DAC. The borough would pay for use of the center, thereby helping the district, and in the process helping the borough and helping the downtown.

Hohenadel brought up several concerns about the plan, including accommodations for Luthercare and adequate square footage for additional offices. A Luthercare child care facility is currently housed at the DAC. Adequate parking for additional personnel is another issue of concern, according to Director Barry Ford. Ford also said the move would lose the "walk-in" aspect of keeping offices downtown. Both Leader and Ford asked who will pay for the study.

The idea of such a move is not completely new. Mayor Leo Lutz floated the idea at a previous school board meeting.

At discussion's end, Board President Keith Combs said he will contact Sahd to set up a meeting. He said he wants information from Luthercare and borough council before considering a feasibility study.

This is exactly where and why we need referendum ​voting on big project spending.

The taxpayers can speak out at meetings, but too often the projects move ahead regardless of their concerns. Voting could put an end to reckless spending habits.

The sewer plant feasibility study cost $76,000 or so. I'm fairly certain this study won't be a dime less.

The DAC Building would surely require significant construction to accommodate the police department and borough offices. That will run in the millions.

The borough offices are now being carpeted or having some type of flooring installed by Essis and Sons. They carry high end carpet and flooring. It's not Carpet Mart. When was that approved and what's that costing?

Leaving the downtown Locust Street area with no police department will be interesting, especially at night.

It may be true (or not) that a Request for Expression of Interest (RFEI)has been "put out."

While the RFEI was presented during the May council meeting, Columbia news, views & reviews asked for a copy to publish, we were advised the RFEI had not passed through legal counsel.

We were promised a copy would be released to us for publication when it's been approved by legal counsel. We have not yet received the document.

Merge with West Hempfield, gets rid of our school board, Elanco, aka Strickler Borough office people and police, all rehire. taxes go to west Hempfield, and they run Columbia. OMG, merge now, get rid of these people.

She said Borough Manager Greg Sahd stated that Tom Strickler, the district's director of operations, told him that the school board is in favor of the move.
Well if Tom said its a done deal then it is already a done deal. Tom is the best man in this town. He cares about all of us. LOL......Another Great thing for the town. Spend Spend Spend where is the benefit to the home owners. it certainly isn't cutting taxes. They go up every year.

You can't force a merger and what advantage would it be to others to merage? Would you want to merage with columbia? Don't keep hoping it will happen and getting people to believe it can happen.

You who says merge? What makes you think Hempfield wants us. Merger is not gonna happen. Get your head out of the sand.

if unethical behavior , outright lies, and inflated egos could be transformed into cash, your little district would never have to raise taxes again.

My head is out of the sand, I spoke to an official from Hempfield a year ago about this, and there was no interest in Columbia then. This would be a state thing, you don't see anything Happening do you, Just everyone's ass of complainers and no do nothing, I tried and better Columbia name have to. The problem is this is not like a business like Anvile International years ago when people lost $ 5.00 an Hr and benefits, teachers, and admin don't lose anything, $60 to $88 grand a year, $ 3500 a month retirement. What would you change my man, the system is out of hand, plus why would any teacher want to teach today, you have no Idea what they go through, Home school, let mom and dad put up with the ignorance of their kids.

It doesn't matter if Hempfield or anyone else "WANTS" us, the state can mandate it. Time for action. I think you actually want us to keep our heads in the sand so we don't see what really can and must be done to correct this situation. Any district graduating under 100 students a year should not have a tax rate like ours.

ridiculous ALL because a councillor wants to sell the borough bldg AND the market.

No one runs against or votes out the mayor and council, which allows them to do what they want, when they want and how they want! They think they are almighty! There was just an election that could have changed all this but no one ran against anyone! Now it is going to be the same game for several more years!!!! So get accustomed to it!!!!! Or demand the mayor and all council members resign!

The market house belongs to the town!!
That council members and his supporters better take a step back!
Their agendas screwed the taxpayers enough!

EVERYONE NEEDS TO SHOW UP AT THE NEXT COUNCIL MEETING AND DEMAND ANSWERS & RESIGNATIONS OF THE MAYOR, ALL COUNCIL MEMBERS AND ANYONE INVOLVED WITH ANY OF THE MONEY SPENDING DECISIONS!

WoW.Craziness going on...
Why move to the DAC building? Oh that's right, make room for store fronts and high end condos at Borough Hall. As for market they could give a care. Don't even want to even make it work... If they want to move why not move down to the Columbia No.1. New building and has amples space and parking. Damn...
Fix up the center of town instead of playing around with this other business of fantasyland. ��
As for the RFEI. That won't happen for awhile since it was put out then pulled back to add then put out once again only to be pulled due to the fact they didn't check with solicitor on things and now wording needed to be corrected. I believe they sit there at meetings! WTH! Wasting money. Ass backwards town and Disneyland dreams! How's about walking your town and talking to all citizens so you can get a grip on your town you represent!