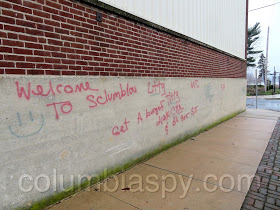 Two people believed to be responsible for the recent rash of graffiti in Columbia have been arrested.

The two were arrested by police recently for an unrelated incident and confessed to spray painting the graffiti when questioned by Officer Bryan Keyser and another officer. Several buildings on North Second and North Front were vandalized during the last week of March. If the suspects are found guilty, they will be made to provide restitution, among other penalties.

More information will be posted when it becomes available.
Posted by Joe Lintner at 5:20 AM

Why is this 'fantastic hews?' No one else seems to know who these culprits are, just the almighty mayor???? Time to get him out of there, he spreads more gossip, to make himself look good, than he does important stuff!

If they are juveniles, we may never know who they are. Whoever they are, the names should be made known.

Yea and make them powerwash and repaint every thing

Why not get several cans of Red Spray Paint and paint these BANDITS and then as they walk the streets and go to school we will know them or let all the residents spray paint their homes. They probably live in rentals.

I rent and I know better. Renting has nothing to do with it