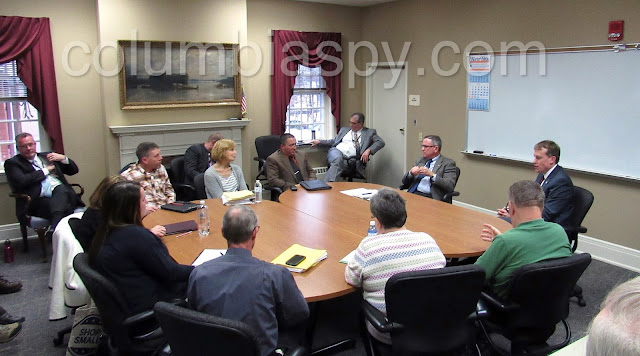 The Columbia School Board and ELANCO officials meet with Senator Aument and Rep. Hickernell, who are seated on the right side of the room.

Senator Ryan Aument and Representative David Hickernell were met by the Columbia School Board and ELANCO officials but only six Columbia residents at a meeting Thursday, April 6. Residents were permitted to listen, but questions were posed by board directors.

Board director Kathleen Hohenadel asked Aument and Hickernell where the district stands regarding funding for the shared services agreement with ELANCO.

Aument provided an answer after praising Columbia and ELANCO for entering into the agreement. He said Columbia has the potential to be a statewide model, or example. He also said this pilot program is the best use of taxpayer resources. Aument explained that there's only one other shared services agreement (that he knows of) in the entire state -  in northeastern Pennsylvania.


Legislators created the mechanism for funding a grant program which allowed the Department of Education complete flexibility to fund that program with the resources available. Aument said, "We believed a year ago at this time that, frankly I still believe, that the department has funds available to it that it could make available to fund this grant program."

"Throughout the last year since the legislation was adopted, we've had ongoing conversations with the Department of Education - and I'm guessing now - about six months ago, they came to my staff and I after some repeated pressure from us that there were no dollars available within the department for this program."

Aument explained that they had intentionally not appropriated or asked for a specific appropriation for the shared services, allowing the department the flexibility to fund the program with funds available. Legislators will have the option to ask for a specific amount in the next budget cycle. The next step for legislators is to direct the Department of Education to set aside funds for this program. Aument said there is not a direct appropriation but a competitive grant program. Columbia would have to compete for the state dollars.

Representative Hickernell, who is the education chair, asked the board: "Could you let us know how this has worked?  You're into this thing seven or eight months now. How is it working so far? Is it something you would envision continuing?"

Board director Hohenadel said she believes the district entered into the agreement too quickly, without necessary preplanning but that she favors the partnership. Board director Charles Leader said he is not sure how to measure any academic gains from the shared services. Board director Janet Schwert said it's almost too early to know what benefit the district has received from ELANCO's expertise. Board President Keith Combs said that the budget affects academics.

The board did not produce any paperwork or evaluation form detailing specific areas of progress from the shared services agreement. Hohenadel said they have received an oral report on some savings, but nothing written.

A property tax elimination bill was also discussed. Aument said that for his constituents, it is the dominant issue. He supports the bill  and said he must listen to what his constituents want. Hickernell said that the number one issue facing the state is pension reform.


There was a non-resident present: John McCartney, who passionately supports the property tax elimination bill. He is a 92-year-old retired registered nurse who drove from Christiana, PA in the heavy rain to attend the meeting. McCartney was informed in advance that he would not be permitted to speak at either of the evening's meetings but chose to attend anyway.

This meeting was public but was not advertised.
Posted by Joe Lintner at 7:32 AM

seriously???? who cares if columbia would be a model for shared services! do your jobs. eliminate property taxes. consolidate the schools. DO somethihng for this poor poverty town. you should be fighting tooth and nail for additional monies and services for columbia. we are too small, have NO money and donlt stnad a chance.

Our legislators will never do what is needed but will do what is politically correct. There's no doubt the only workable thing for education in Pa is consolidation. Funding 500 school districts only takes money out of the classrooms away from educating our children. Columbia is just a big example of the crazy spending that's going on in this state. 20 some million to graduate about 70 kids a year on average. But Hickernell & Aument have constituents in multiple school districts. Those voters in the wealthier districts will never want a needy district like Columbia. So Pa will go down the road of the state of Illinois & bankrupt the whole state to stay elected.