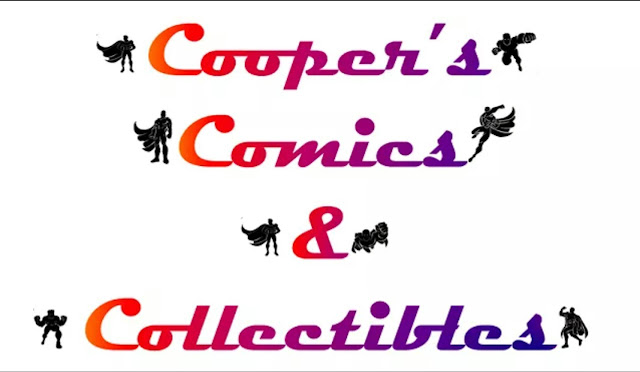 A new store is opening in downtown Columbia this afternoon at 4:30 – Cooper’s Comics & Collectibles! The address is 477 Locust Street, located on the corner of 5th and Locust streets, formerly the home of Ladybug Keepers, an excellent location to be sure! Interesting history note – after World War II, Monte Cooper, a renowned flooring mechanic and jazz saxophonist, bought that building and opened their first business there, Columbia Flooring. Monte Cooper was the father of the current shop keeper, Mitch.

The store houses 50 ‘long boxes’ (the name used when describing the type of box that comics are often stored in) of back issue comics, some dating from the early 1960s (which are highly collectible) until right around 2010, which encompasses 50 years of comic collecting. Collected ‘mini-series’ issues and graphic novels can be prominently found occupying 2 shelves of a floor to ceiling bookcase. The rest of that bookcase contains various collectibles.

Current comics will soon be available as well and will be easily shopped via a cleverly designed and beautifully built (by Ron Worby, Mike Finegan and Izzy Acosta) display cabinet along the back corner of the store. There is also a large number of trading cards, mostly movie and comic book sets already organized in binders, action figures and vintage watches. Pokemon cards can also be found and the owners, Mitch and Jeanne Cooper, promise an expanded selection of gaming cards very soon (so let them know what you’re looking for!).

One other interesting choice in the store is a LARGE screen TV positioned in a rear corner of the establishment. There was a vintage Fleischer Superman cartoon playing while I was there and I found it a nice backdrop to the surroundings (wink, wink). They plan to have vintage NEC Turbografx 16 game play on that setup from time to time.

All in all, it would be worth your while to stop in, take a peek and chat with the owners (and other customers) about what books, cards and collectibles you’d like to see them carry.


Clark Kent, senior reporter with the Daily Planet
Special correspondent to the Columbia Spy
Posted by Joe Lintner at 8:10 AM