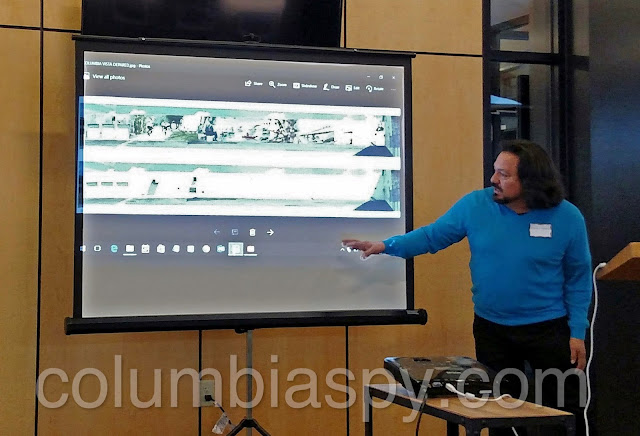 Artist Cesar Viveros presented a proposal for a large mural to be painted on the Eastern Drillers building along Front Street.

Plans for a large mural to be painted on a Columbia building were discussed at a public meeting held at the Columbia Crossing building on Tuesday, March 7. Janice Nikoloff, executive director of the Columbia Economic Development Corporation led the event.

Eastern Drillers, a company at Front and Walnut Streets, was chosen as a location for the mural because it faces the Susquehanna River and is highly visible to visitors accessing the Northwest Lancaster County River Trail. Representatives from the company attended the meeting.

Possible concepts for the mural were presented by Cesar Viveros, a Philadelphia artist. CEDC selected him as the lead artist for the mural project because of his extensive experience with large-scale murals, and his artistic presentation and style. Several local artists will also be helping to lead the community painting days and installation of the mural.

The mural will be painted through the "parachute cloth method"  (http://hiddencityphila.org/2012/06/how-to-paint-a-mural/) in which the painting will be done on a parachute-like cloth to be permanently installed to the wall after completion. This method creates a stronger and longer-lasting mural, but just like painting directly on the wall, the work cannot be removed once installed. The mural will be divided into grids (up to 100 for a mural this size) within which sections are traced and which members of the community are invited to paint. The grids will then be taken to the wall for installation.

Several people in attendance offered suggestions after viewing examples of what could be done. Incorporating Columbia's history into the mural seemed to resonate with most of them.

Nikoloff said the total project costs will be over $40,000. CEDC has set aside a portion of the funds and plans to raise the remaining funds through grants, individual donations, and corporate sponsorships. The organization will also be seeking donations of time, supplies and equipment. Nikoloff stated that all donations will be useful and welcome. She encouraged public input. Suggestions regarding the mural can be emailed to ColumbiaEDCorp@gmail.com.

The mural is expected to be completed by spring of 2018.

Here are two articles about artist Cesar Viveros and his work.

Hmmmm.... Does this require a Zoning permit or any kind of approval process? Thinking it may inspire other property owners and would be nice to know what is required.

And Eastern Drillers is paying how much?

My understanding is no permit is required to paint.

I would hope zero since they are donating their property for a community project.

If they paint a mural of what Columbia's front street used to look like visitors are gonna want to know where that Columbia is.

This is a great idea but the sun sets in the west and the mural will be exposed to extreme sunlight in the summer. will this have any long term effect.

Wouldn't the building be the canvas?

If this painting is dammaged by vandals with spray paint or other damaging paints can it be removed?? Or is there a camera at the river park or elswhere that can see this expensive art??

You're right! Major goof on our part! Good catch! Correction made.

Why would spend $40,000 on a mural that a Columbia native would do for much less

Any professional pictorial artist would paint right on the building. That is what a mural is . Not a inside shop project. Buyer beware

I did wonder why a local artist wasn't hired. Keep the money here. The mural on the rear wall of the Forester's building is absolutely a beautiful piece of work and from what I understand it was done by a local artist. I'm sure it's too large for one person to tackle, but perhaps a team of local artists.

I think it is a nice idea, but if the man they consulted will work with any interested local artists,I think it will have a lot of meaning. Also, if any talented youth artists at CHS will help, I think it will be great. Getting youth involved may give them a sense of responsibility.

Why? Because it's other people's money!

It would be great if they invited a couple of the graffiti kids of Columbia to take part, a small part, maybe if included they would feel a sense of pride in the community.