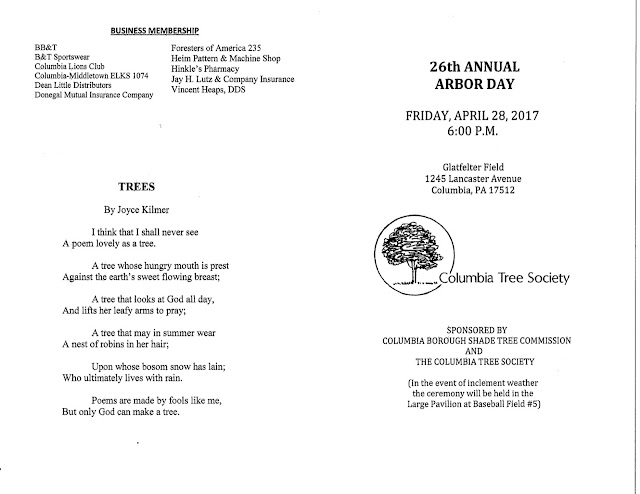 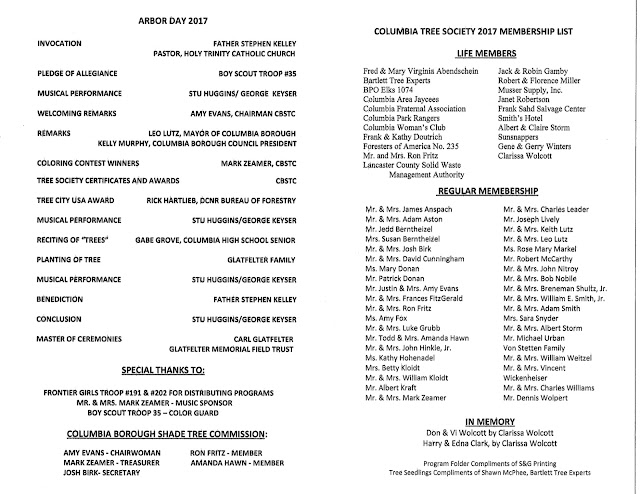 Several borough residents will be recognized for their work with the Commission in 2016. Cash prizes will be awarded to second grade students from Our Lady of the Angels School and Park School for their winning entries in the Arbor Day coloring contest.

Musical selections will be played through out the ceremony by the Stu Huggins and George Keyser.

Boy Scout Troop 35 will serve as the Honor Guard, and Frontier Girls Troops 191 and 202 will assist in the distribution of programs.

The annual ceremonial planting of the tree will be in memory of Phil Glatfelter, who served as secretary-treasurer of the Glatfelter Field Foundation since 1960. Mr. Glatfelter passed away last October.

Columbia High School Senior Gabe Grove will recite Joyce Kilmer’s poem "Trees" during the program. Gabe is the son of Christopher and Alegra Grove. While studying at Columbia High School, Gabe was the captain of the baseball team in his junior and senior years. He was a member of the National Honor Society for four years, serving as secretary of that organization his senior year. He is also president of his class and was a College Ambassador. He also served as Host to CHS’s first NCAA meeting where a discussion on how to increase a student’s chances of becoming a collegiate athlete was held with former and current NCAA student-athletes. This past summer, Gabe attended the F&M College Prep Course, where he took several classes and participated in discussions with other students from across the US. The seminar included traveling to other college campuses for 3 weeks.


Gabe hobbies are hanging out with family and getting in more “baseball.” He plans to attend Kutztown University in the fall.


In the event of rain, the ceremony will be held under the large pavilion located next to baseball field # 5.