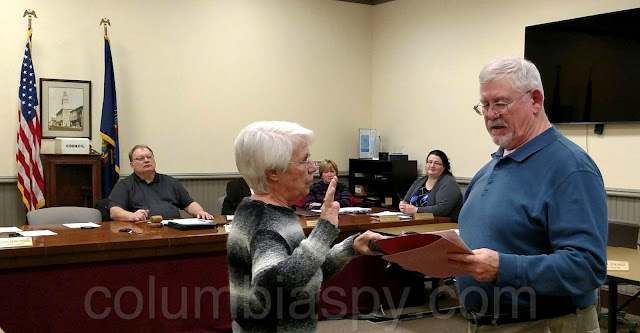 Mary Wickenheiser is sworn in by Mayor Leo Lutz.

Interviews for the vacant borough council seat were held this evening during the special meeting. Frank Doutrich and Mary Wickenheiser, both of whom previously served on council, had submitted letters of interest.

Doutrich took the podium first and rescinded his bid for the seat telling council, "I don't feel I can work with you people." He also told council that he has a better chance of being hit by lightning than being appointed to fill the vacant seat.

Mary Wickenheiser was next to be interviewed and told council that she would be required to resign her position as tax collector if she were appointed to the seat. She had a letter of resignation prepared, and gave it to council. Wickenheiser said that she does a significant amount of volunteer work and knows what's going on in the borough. She said that she supports what this current council is doing.

Councilwoman Dr. Sherry Welsh made the motion to appoint Mary Wickenheiser to the seat with a second from Councilman Cleon Berntheizel. The motion carried unanimously and Wickenheiser was sworn in by Mayor Leo Lutz. Wickenheiser will fill the seat left by Stephanie Weisser in December 2016 with a term to expire December 31, 2017.
Posted by Joe Lintner at 8:44 PM

i wish me doutrich would of at least made council pick between the two and than let them say why thay picked the person they did. i think we all knew that mary already had the job .after marys comment about her supporting what councile is doing . i think she will just do as the rest of them spend,spend,spend

LOL, on the Frank Doutrich comment. That has to be the best assertion on what this Columbia Borough Council's DNA has spelled out. Invest in zero profitability for the taxpayers of Columbia Borough.
Why is Greg Sahd letting this happen. At least Norm Meiskey was fiscally responsible and make a grand stand on frivolous spending. Oh,I forgot that his bosses are the Columbia Borough Council and maybe afraid to step out of line.
Vote to remove the majority and drain that swamp!

Personally, I admire Frank for asking tough questions and following up. There should be a balance. Council is no longer made up of our elected officials, there are five that have been appointed.

It is pretty bad when a person that is willing to serve feels he has to withdraw because they have a better chance of getting hit by lightning than being selected. Council must be opened minded and listen to ALL people. Council represents everyone and must forget their personal agendas.
The upcoming elections for council and school board will be interesting.

COLUMBIA TAXPAYERS SHOULD ATTEND THE NEXT COUNCIL MEETING AND ASK 'LOTS' OF QUESTIONS, ESPECIALLY ABOUT ALL THE CHANGES THE CONSTRUCTION(S) HAVE MADE, ALL THE CHANGES THE MAYOR AND SOME OTHERS ARE MAKING, WITHOUT ADVISING OR GETTING THE OKAY OF THE COUNCIL, BORO. MANAGER, AND THE CITIZENS WHO ARE PAYING FOR IT. tried to get into the police station and found the door was locked. was informed this is going to be the case. what's happening to our so called wonderful town??? just who is in charge and why all the secrecy? makes you believe something is not on the up and up, huh?

Hate to be mugged and stabbed in a local alley or street trying to seek help. Will I die in front of the Police Department?

I was,too. She is very big on developing the river park area, but she is involved in many community events. She is visible to the public and will be a great asset to the borough. Good luck, Mary

At the meeting last night, we were told that there are no personal agendas and council is fed up with hearing that.

Congratulations Mary and thanks for serving.

LOL absolutely, you hit the nail on the head with that one!!!

I wonder how many people who have commented to this post have done anything for Columbia or asked to sit on any committee or came to any meetings. get involved with the town and learn what is going on. be like Frank Doutrich,he is involved at various meeting and asks a lot of questions. be involved don't just post without knowing your town go to the various meeting your town government has. be a volunteer.

They do as they please!! How many times have people went and nothing got done about their actions that were said!! How many times have people wanted some things to be but on a ballet for the towns people to vote on an issue and it was never put into play!! Yes Yes this is why people don't give a damn about this town! This is why people that left council only to return later and get back in only to do nothing or do for their own take ! A piece of the towns pie "money" that they want their hands on before the MONEY WELL dries UP!!

If the lobby doors of the station are locked, the residents should be informed. What would it take for the borough to communicate that to the people. A lot of problems and misinformation could be cleared up if they publish a newsletter more often and use more than Merchandiser to distribute. Check into a bulk mailing or maybe have the scouts to go door to door and drop off.

Sounds like a great idea. But it will not happen. Look at how many attend the school board meeting and the council meetings. This why so much gets swept under the rug or voted on unanimously because tax payers don't voice their opinions at PUBLIC meetings. PLEASE attend and become aware of the issues that your elected and appointed officials are doing and not doing. Believe me it is VERY interesting what they do.

personal agendas are DEFINITELY an issue!

How many open seats are on committees? The common answer always is: if you don't like what's going on then run for a position to make changes. What a joke! Most could never be appointed to a vacant seat and most will never win an election. There's only a few open spots available. That's a dismissive answer. Just trying to shut the people up. If 50 residents complain, are there 50 vacant seats they can run for? A handful of residents control the money of thousands. That is the bottom line.

Just what makes you so sure that the people commenting here do not attend meetings or volunteer? I for one comment here regularly and I have volunteered for the community in several capacities. I
Just because someone signs anonymous does not mean they are not active in the community.

The boat launch to the islands will get special attention. And why are we still paying or even have a tax collector. Let the county do it like every other municipality does. Cheaper that way.

This Council got a windfall when they dissolved the Municipal Authority and when they run out of this bankroll you will see municipal taxes rise to the level of the School taxes! With the appointment of Mary, you can bet there will be more money spent at the River park. Get out of Columbia while you can! Although, that's a lot easier said than done! Just look at the number of houses for sale in this Borough!