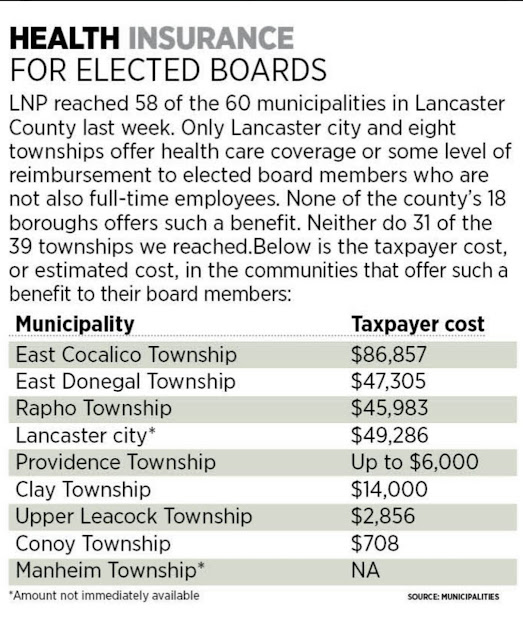 While few elected officials here and across the state take advantage of the benefit, some do — to the tune of tens of thousands of dollars in coverage a year per person.
MORE:
http://lancasteronline.com/insider/some-lancaster-county-municipalities-cover-health-insurance-for-their-elected/article_a090bdc8-f57e-11e6-9fd9-c3f9cc16804a.html
Posted by Joe Lintner at 11:24 AM

What does the President of the Coffee Club need health insurance on the borough now?

This did come up at a meeting in recent months. It is ludicrous to expect this small borough to pay healthcare for elected officials. There are people working 40+ hours a week that either do not have or cannot afford the premiums for healthcare. They are being compensated for their time and effort. If our elected and appointed officials do not feel that the current compensation is enough, they should not have run for the position or applied to be appointed. Columbia the cash cow cannot support everyone.

Taxpayers that do not have healthcare insurance should NOT ever be paying for healthcare for elected officials. What makes their health any more important than that of the taxpayers?

The back story on this is that East Cocalico Twp went through a police dispute last year. They provided service to other neighboring municipalities and claimed they needed to raise the cost because of increasing expenses yet their supervisors were fleecing the citizens with health care coverage for themselves. Neighboring municipalities went elsewhere for service and they wondered why. There is no reason a part-time, if that, borough or township employee or elected official should be collecting $25,000 or more in health care coverage. Simply ridiculous. Yes Cole, I am going there, but there is no wonder people voted for Trump. They are tired of the bureaucracy and ridiculous spending, even at the local level. I voted for Trump. I can't guarantee things will change but I am sure as heck sure nothing would have changed under Clinton. I am tired of this type of BS!!!! Citizens of East Cocalico, stand up and make your voices heard!!!

As was stated above, this was discussed many months ago when the subject was brought to council by a non-council member who provided then that this could be an enticement to get more people interested in council positions. The matter was researched and also as stated above council voted unanimously not to consider this due to the high cost of doing this plus the fact that they did not feel this was a proper use of taxpayer monies. This was said at one of the 3 public budget meetings. Maybe we should give them the credit they deserve for not approving this.

Good heavens! I know full time workers who have to pay towards any insurance coverage they may be getting! WHY OH WHY WOULD THE TAXPAYERS BE EXPECTED TO PAY FOR ELECTED PEOPLE TO HAVE ANY TYPE OF INSURANCE???? There are so many senior citizens out there that can't even get treatment because they do not have enough money to pay for the higher costing insurances, so why should anyone expect 'free' or lower cost insurance coverage for so called 'elected' persons?? Come on Columbia, you already have them paying for a stinking office for an 'elected official' the mayor! Now I GUESS HE WANTS INSURANCE?? ALONG WITH ALL THE SPEND THRIFT COUNCIL? WHERE DOES IT END? DO THE EMPLOYEES IN THE BOROUGH GET FREE PAID INSURANCE? I BET THEY DO NOT, AND THEY DO ALL THE WORK THAT THE ELECTED PERSONS TAKE CREDIT FOR!!

People voting for Trump because they think it will change local level politics is like throwing your hat in the washing machine so you'll get clean socks.

There won't be much of a change - except his billionaire buddies running the bureaucracy will get rich off of our backs. Just wait until Paul Ryan gets his wish - bye bye medicare and social security. Hope you have a few hundred thousand stashed in case you have to go to the hospital. Think insurance companies will touch anyone with gray hair? Ha!

Sorry guess again. This wasn't suggested by the mayor. Came from a borough staff.

absolute bs. like all our elected politicians. suck all the money from the hardworking taxpatyers

It was introduced by a councilwoman, not sure whether it was her idea, but it came out of her mouth.

And was also voted against out of her mouth, along with the rest of the council members. They voted unanimously against it.