At February's meeting, Columbia Borough Council took action on several issues, chief among them the large number of blighted properties in the borough.

Mayor Leo Lutz said the Lancaster County Planning Commission approved six more vacant borough properties as blighted. They will now move through the blighted process. “By going through this process, they're not going to sit there much longer and deteriorate. Something's going to happen with them,” Lutz said.

Steve Kaufhold, manager of code enforcement, said there are currently 37 condemned properties in the borough, 14 of which have been placed into the blight process to be rehabilitated and put back onto the tax rolls. All of the blighted properties are vacant, according to Kaufhold. There are currently 26 total properties in the blighted program, with eight more in the process of being put into the program. Lutz said the blight program goes “hand-in-hand” with the Land Bank, another program that council recently initiated. He said the Land Bank is another entity that can buy blighted properties with an eye towards revitalization and future home ownership. Lutz also noted that Governor Tom Wolf just signed a new law that allows local municipalities to penalize owners of properties that are unattended for at least two years “up to and including jail time.” Lutz said he hopes to see improvements in the borough's housing stock within the next year or so.

According to Borough Consultant Rebecca Denlinger, Columbia has had the LERTA program in place for three years, and it is currently in its fourth year. Greg Sahd said that only one application was received recently. Denlinger said the program works in other communities but is not sure why it's not working in Columbia. Developers are interested in borough properties but hesitate due to financial issues, Denlinger said. The 5-year LERTA abates taxes on a property; i.e., only the taxes on improvements made on the property. Base taxes are still paid. On the first year after improvements are made, the abatement is 100%. (No taxes are paid on improvements.) Year two: 80%. Year three: 60%. Year four: 40%. Year five: 20%. After the fifth year, the property comes fully back onto the tax rolls. 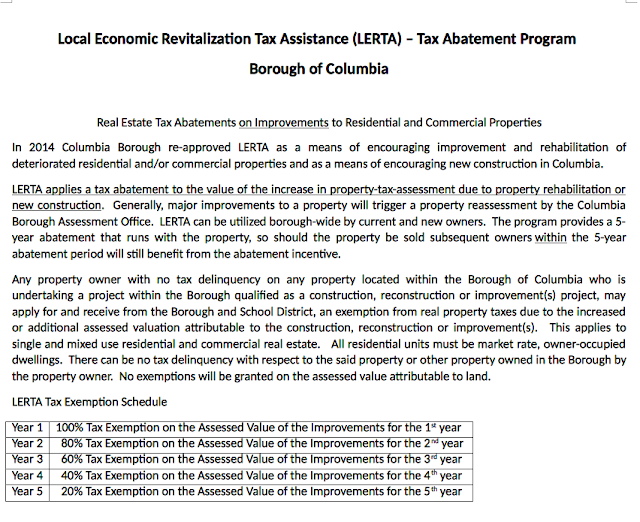 Terms of the LERTA program as it currently stands are shown above. More information can be found HERE.

Denlinger proposed a 3-year abatement of 100%, with the abatement for years four and five at 50%. “Those three years of 100% abatement allow for new development whether it's commercial-only or mixed-use – residential and commercial mix – it allows for that property to become stabilized,” Denlinger said. She added that the next step would be to present the idea to the school district, after which it will go to the county level.

The meeting with the school board is scheduled for March 2.

Councillor John Novak said, “We're increasing the incentives to get people in our community involved in the revitalization of a great town.”

Council confirmed the appointment of Mary Wickenheiser to borough council to replace Stephanie Weisser whose resignation the council accepted on January 9, 2017.

Council voted to advertise a rental ordinance amendment requiring owners and managers of rental units to notify the borough of vacancies and schedule an occupancy approval inspection with a code enforcement official prior to a change in occupancy. Currently, there are 53 unlicensed rental properties in the borough, according to Steve Kaufhold.

Why in the hell are there ANY unlicensed rental properties? Give all of the tenant 90 day notice and do NOT let it become a rental property.

i think it would be very beneficial to get rid of about 800 rental properties. turn them back into single family owned homes. there are way too many problems all the way around. thank you to the new code manager for doing what helm SHOULD have been doing for the past 20 years. also wonder WHY people who have money to invest in town are turned away. I THINK THAT THE BORO should BE JUMPING THRU HOOPS TO attract and keep people here...whether for a business venture, or commercial or investing in the boro's future....WHAT is the zoning officer thinking??? need someone who has the BEST INTERESTS OF THE TAXPAYERS AT HEART.

I agree. Heard the same thing about zoning and ppl interested in the borough being told no you don't want to do that....Wth?!

still not sure why with all these added code people, that we NEVER see them out walking...say up and down Locust St. Need to enforce that ALL trash must be in BAGS IN TRASH CANS....they need to focus on the entry ways into the Borough.....North 3rd St, Lancaster Ave,entire downtown...
have read about all the condemnations! its way past due. if they are rental properties take away thier rental licenses.