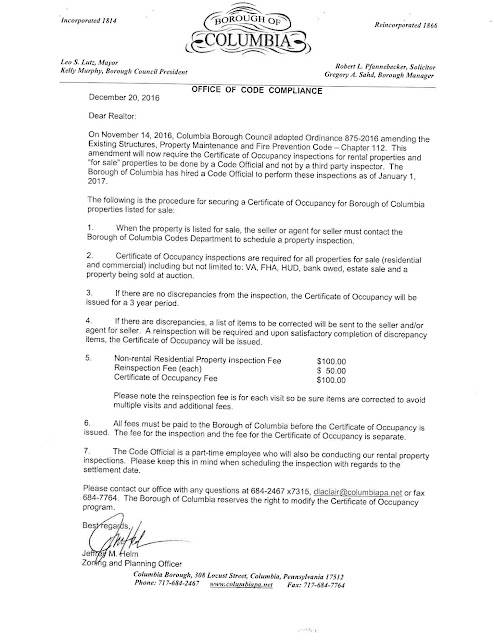 Columbia Spy spoke with a Lancaster County businessman late today, who voiced an opinion about a recent ordinance (Ordinance 875-2016) regarding home inspections and certificates of occupancy. He requested that his name be withheld.

He believes the ordinance will lead to increased vacant and blighted properties. Owners will walk away from properties due to heavy-handed inspections and repair requirements, he said, leading to an increase in crime and a situation like that of Harrisburg, which he calls "the capital of blighted."

Citing one such home inspection lasting three-and-a-half hours and resulting in a 13-page repair list, he said that such scrutiny requires too many repairs for homes valued at only $30,000.

He surmises that every borough property decreased in value when the ordinance was passed, adding that it "borders on illegal." He said Columbia is in the shape it's in because it is mismanaged.
Posted by Joe Lintner at 7:45 PM

Is this just for rental properties that are going up for sale ?

Best guess, according to the letter, is it includes all "For Sale" properties.

Your last paragraph comes as no shocking surprise to me! We're going to hell in a handbasket...no one wants to move to Columbia due to the school tax, now this...SMH...we're stuck!

I would take it is for all properties up for sale. If done correctly, slumlords will not be able to just buy a property, do very little to the it and resell or rent it out.
Time will tell if it will be affective.

That has been going on for years. Sold my home in 2013 had to go through that. Was a bunch of crap. Would have been better to let the bank take it. I made no money on the sale because of such. This is why Columbia Real Estate is in bad shape. Along with the ridiculous school taxes. This town is going to the dogs.

I sold two properties, one in 1997 and another in 2004. The first one had a list of requirements from the code officer that were completely out of line considering the value of the property. That property now sits vacant and at one time was even condemned. What did meeting all those insane requirements gain for the borough or for the next owner? In 2004, I was required by the borough code department to install a firewall prior to selling that home. I only owned the property for seven years and no one from codes cared that there was no firewall when I purchased the property. I can totally understand why people would choose to walk away from properties that have lower market value.

Renting looks better all the time, just not in Columbia.

Again, codes are nice if sensible.But when you make them a hardship for a property owner to go by, buyers will walk away. Just how professional is our code department? They have enough problems with a few landlords in this town. Just look on Locust St.

I want to elaborate on the inspection of the home I sold in 1997. My brother who is a self-employed electrician did all the work required on the borough's code inspection list. He told me I did not have to pay for his work until I settled on the property. Had he not done that for me, I would not have been able to move forward and sell the property. The list involved lining the crawl space under the house with a certain material. Concrete to part of the basement among several other items. Again, when I purchased that home the code department didn't care that there was nothing lining the crawl space. If I can locate the list for the 1997 inspection done by Phil Gerber I will publish it.

I wonder if all the borough properties are up to code?

the letter states: ALL RENTAL PROPERTIES AND FOR SALE PROPERTIES. Right at the beginning.

Thank you for the same response. Residents have been demanding harder enforcement for years. Now council has done something to try and reverse the tide. What's the alternative? Do nothing and stay with the status quo hoping that property owners do the right thing and continue to watch properties deteriorate until they have to be demolished. As you say, give it a chance. Concerned citizen

Yes SOME residents have been demanding harder enforcement. And now they will have to pay as well. The boro can not pass ordinances that apply to only some people. SO now all homeowners also have to abide by these terrible ordinances.
If people would only look at the real problem with Columbia instead of wasting time and resources on code enforcement. The REAL problem Columbia has is JOBS. There are very few college educated jobs available in Columbia. Ask any realtor the top 2 reasons people move to a home and the realtor will tell you 1)job 2)school. Columbia has problems with both so NO one wants to move to Columbia. That means lower prices. Lower prices mean poor. Poor means dilapidated vacant properties. You can not code enforce a vacant property. Good Luck !

A 3-1/2 hour home inspection with a 13 page report is called OVERKILL!

Maybe residents wouldn't be upset about increasing code enforcement if it were dished out equally. A realtor told me it is not. I can see that it is not, clearly favorites are protected. The realtor referred to the "good old boy" network when describing his feelings about Columbia's code enforcement.

what? for $100??? the certified home inspectors charges anywhere from like $400 to $800. Again, the Boro loses. Although, on another note, I've been seeing way more properties that are condemned. Guess the new guy is in town!!!!! Yay! Kudos. Now Boro take steps necessary to outlaw anymore properties being turned into Rentals. I believe close to 1,000.00 is MORE than enough.

I don't know if there's anything left to deter homes from selling in Columbia.
Yes code enforcement needed to improve, but they went too far. Dire situation with hopeless leadership to fix it.

no ONE has a clue. there hasn't been ANY leadership in the Code Dept for many years. the same properties were problems year after year for the same ole crap. glad to see some change. hope it all works out for a change!