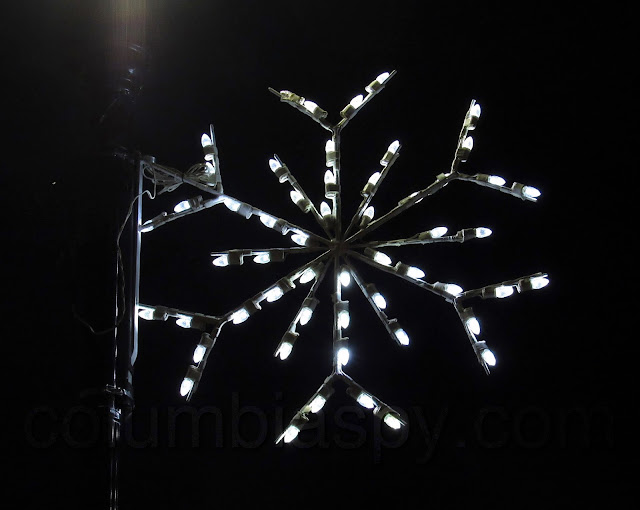 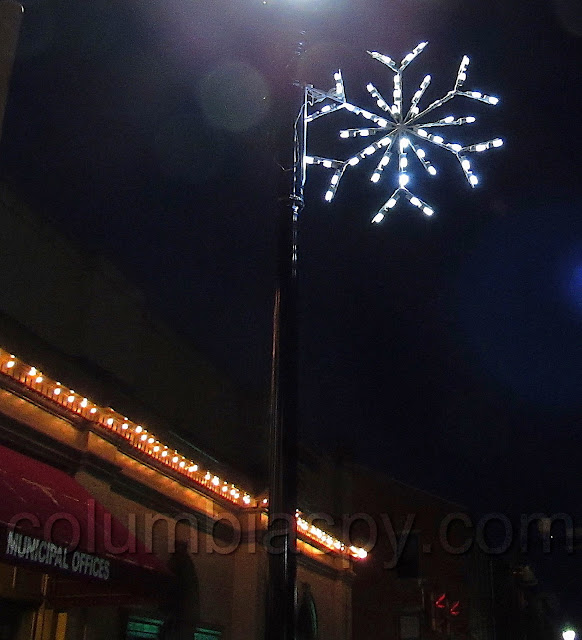 The sample snowflake light shown above is currently on display in front of the borough offices at 308 Locust Street. The sample is a "cool" light, but the plan is to go with "warm" lights.

Council approved the purchase of 37 snowflake lights for Locust, Third and Fourth Streets, another five for Locust Street Park and 12 for Columbia River Park, at Monday night's meeting. The total cost will run close to $15,000. Councillor Cleon Berntheizel explained that this is a sale price through "Rileighs Outdoor Decor" and is good only until the end of February.

The old snowflake lights are in storage, because the current lamp posts that line the streets cannot support the size and weight of those older lights. Berntheizel has discussed other ways to make use of the old lights rather than keeping them in storage.

There are four designs of LED snowflake lights that will alternate on the poles.

In other business, resident Frank Doutrich questioned why council tabled Councillor Stephanie Weisser's resignation in December. President Kelly Murphy said it was due to the Christmas season coming up. Later in the meeting, Mary Wickenheiser also questioned this move by council.

Wickenheiser said that the interviews for vacancies were being done at regular council meetings. She questioned why there was a separate special meeting scheduled for this on February 6. Wickenheiser also announced that she would have to withdraw her letter of intent because she would not be available to interview on that date.

She also questioned why filling this vacancy was delayed. President Kelly Murphy said it was due to the holiday season. Wickenheiser said it made no sense to her.

There was a brief discussion of having her interview via telephone, but she did not feel as if this was an option for her.

Council voted to change the meeting date from February 2 to February 6 at 6 p.m. All letters of intent must be received by February 2, 2017 at close of business that day.

Addressing council, Frank Doutrich said "With all due respect to Mary, would you do the same for me?"
Posted by Joe Lintner at 7:02 PM

What a ridiculous answer "Holiday Season" on delaying the resignation. Maybe it was because the Coffee Chambers did not have someone lined up to fill the position. Remember, it takes time to choreograph a new Councilman on what Cle wants for Columbia.

Does Frank or Mary know they have NO chance to be installed due to their fiscal responsibility they have for the town. Bring Jim Smith back so he can scream at everyone, especially Mary.

Remember to vote in the primaries to drain the swamp and make Columbia great again!

seriously....$15,000.00 for snowflakes????? WTH..... do you council people live? dO YOU HAVE any IDEA HOW MANY HOMEOWNERS ARE LOSING THEIR HOMES every YEAR??? do you UNDERSTAND WHY all these single family dwellings are being turned into rentals???? do your hoomework. educate yourselves. and stop spending our money on frivilous crap. if we added up all the bs shit you wasated money on this past year i imagine it would be more than 6 figures. that is totally unacceptable. people are losing thier homes BECAUSE THEY can"t AFFORD TO LIVE IN THE boRO. tHE TAXES ARE too HIGH. tIME TO CONSOLIDATE SCHOOLS, WHETHER hEMPFIELD WANTS TO OR NOT. nO CHOICE. gET THE STATE INVOLVED. THIS IS LUDACRIS.

With the decorations, why did not council seek donations from businesses,or citizens before taking the money from the general fund. In most towns, donations are sought. I am not totally against the snow flakes, but that money could go towards some activities for the youth.

I was thinking that very thing, bring Jim Smith back at least he wasn't afraid to question spending.

As I recall hearing, council was reluctant to ask businesses to contribute because they had done so toward the old snowflake lights that are no longer being used.

Better check to see if anyone is getting a kickback from the seller of the "sale price" lights.....like a finders fee or a purchasers commission.

Thought the price of the snowflakes was suppose to be around $9600. What happened to that price or was Cle just making up numbers to get his snowflakes passed. Why not buy lights for every holiday, hearts, shamrocks, easter bunnies, stars, pumpkins, turkeys and x-mas trees since the snowflakes could be used in January for the winter season. All of these lights would easily cost over $100K. Cle should look into this since he likes to spend other peoples money. Council is a bunch of flakes.

I think those snow flakes are hideous. When do the taxpayers get a chance on how to spend our money. Time to get a whole new council who cares about us.

time to get rid of the mayor, all the council people and the finance manager!!!!!

Hell maybe the borough can sell the old lights to an antique shop.. what buisnesses are left to get money from there is nothing left around here and by the time council is done this town will be bankrupt..

I got to speak with Stephanie Weisser today and she stated that she tendered her resignation on December 1, 2016 to Kelly Murphy and Greg Sahd. So why the delay and not following the Pennsylvania handbook. The word "Holiday" is not mentioned in the handbook.

It is about time certain members of council take the borough concerns in their minds and not their personal goals and egos.

AND WHERE IS ALL THE MONEY COMING FROM FOR ALL OF THE NEW CONSTRUCTION GOING ON INSIDE THE POLICE STATION?

it's time for the mayor to go! he has been in office too long! when that happens you get comfortable & think you are high & mighty above everyone else!!!

That's true, it is closed after dark. It will be difficult to see the lights from the bridge unless you are walking across.
Maybe the residents of Wrightsville will enjoy the lights, courtesy of Columbia Council.

Let's put them on the trail for a Winter Wonderland effect. It will only cost taxpayers another $10k. Who's with me?

This town is a circus

That was done at the mayor's request.

Think back to when the River Park building was being planned and built, it was said to be maintenance free! We see now that it requires maintenance on a daily basis. Costs will be ongoing and those that can... keep throwing money into it.

the chief of police wants to shut down the police lobby & lock the door because public walk-ins are a nuisance! isn't that what the police station & police force is there for?

What?? That's why we are paying for a dispatcher and a police force. Wish I could lock the door at my job!

AND WHAT ABOUT THE MAYOR'S PERSONAL PARKING SPACE AT 3RD & LOCUST STREET?

It might be the mayor pushing this. He answers to no one.

This Christmas decorations thing is interesting. Shouldn't this have been bid and do they know if they will fit the current lights? The spending is out of control and won't be stopped as Cle has control, which is another reason for the delay. He is running out of flunkies for this flunking town.

Please remember we already had 2 idiots claim they wanted to kill our police force. Why would you let the next idiot walk right in off the street and try it. we need to use caution in this decision.

Are the police going to stay inside the office to be sure that never happens again?

Not to mention the $50,000 per year to the Gateway Heritage group for another two years. Plus Columbia's flipping most of the bill on the reconstruction inside the building for the new wall (not Donald Trump's idea). Spend more money and no economic fortune for the downtown businesses.

Though the snowflake lights will make it brighter downtown for the camera's to get a better look at the criminals at night.

Two Peas in a Pod, Lutz and Brommer