Movie at the Market House next Saturday 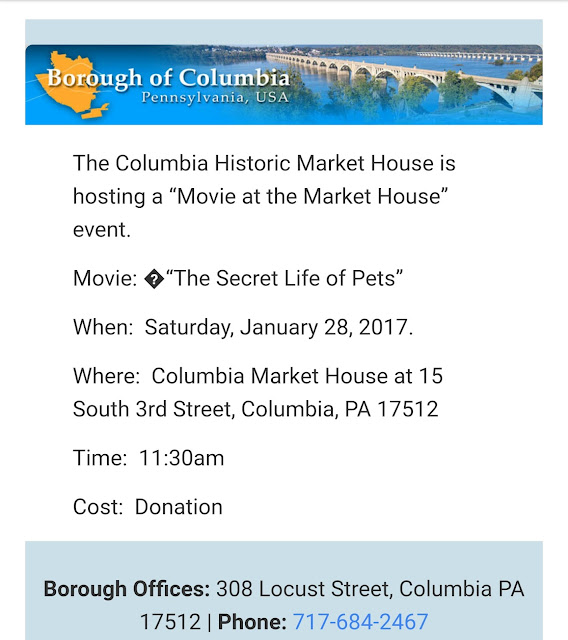 I hope it works and provides an outlet to the youth hanging on the streets.

They are draining the swamp! Give this Market House a person who knows it best. A person with passion for the hardworking people of Columbia and the visitors in our town. Whatever happened to the three that applied for the position: Sears, Troxell and Vera?

I think both people can walk around the screen.

Anyway!! Council took the time and efforts of those three applicants and then tosses the position to the wind. Another example of poor management.

Residents asking what happened to the position that people applied for at a public meeting are not "negative Nellies." They are seeking follow up which should have been provided in the first place.

I am sure many groups do not even know about this license. Many churches and other groups show films and nothing ever said. No admission fee is being charged.

Ignorance of the law is no excuse.

Clarification, the negatives are the ones against a simple movie.
Vera should have been appointed.

Government ought to know the laws - the Market is government-owned entity.

Thank you for clarifying and you are correct, Vera would have been an excellent choice.

If that is the case, enforce jaywalking laws, turn signal violations, loitering and all laws. Rather see law enforcement officials go after drug dealers, child molesters,and other major offenders instead chasing down public performance licenses.

This public performance license, would that include the band's at the Tomato Festival in Washington Borough, the different non- profit groups that hold dances to make money. How can this be ignorance of the law if never made known about it. This law can be added to the hundreds of laws never enforced. Law makers should worry more about tax reform and the Affordable Care Act than public performance license.

How about you do some research into what a public performance license is, instead of looking like a fool? Someone even provided a link above. As far as not knowing about it - you must live in a pretty dark cave to have never heard of copyright laws. Unbelievable. Pretty easy to get the licenses or get the movies through proper distribution outfits. I just hope that proper procedure is being followed.

No one is against a simple movie. Just curious if they are showing it ***legally**.

Another boro matter, on Tuesday,Jan.24, several housing issues will be brought before the Lancaster County Housing and Land Bank Authorities. Some properties are in Columbia. Reported on PG.A20 of Monday edition of LNP.

Showing a movie legally?
Worry about all the other illegal activities dragging Columbia under.

Then why excuse that?

How is a darn movie dragging Columbia down.
Get a clue!

OMG get over your pettiness, it's a movie.
Go grab a crack pipe and preach the law.
Your ridiculous and narrow minded.

I get it. Some illegal things are ok, while others aren't. No, that's cool. Not completely hypocritical at all.