Frank Doutrich's petition for an open school board seat was dismissed by Judge Dennis E. Reinaker at 3:16 p.m. Wednesday afternoon, a little more than two hours before the board was to convene for a special meeting. A January 23, 2017 legal notice in LNP listed the meeting's agenda, which included items to un-table a previous motion and appoint a candidate to the seat. Doutrich learned of the dismissal only after calling the courthouse that afternoon. He subsequently drove to the courthouse to retrieve the documents. 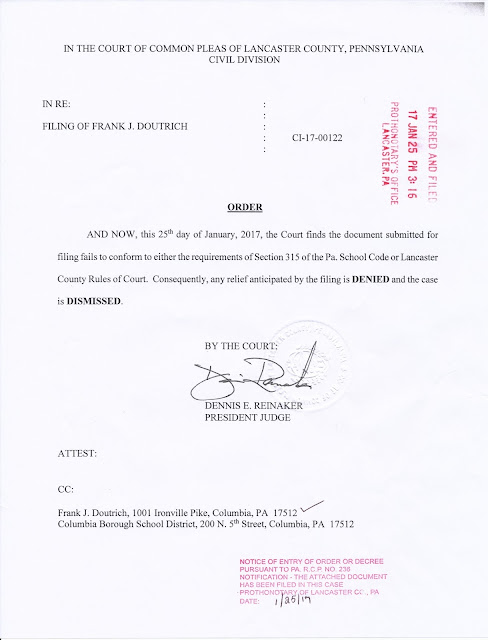 During the citizens' comments portion of the meeting, Doutrich asked Michael Grab, the board's solicitor, if there had been any contact with the school district and the courthouse prior to the judge's decision. Grab said there was not. "The Lancaster County Court contacted my office to advise my office as district solicitor that a petition or something that purported to be a petition had been filed naming the school district as an adverse party to find out if the district had received any notification of that, and I indicated to the court that the district had not."

"But you hadn't spoke to the judge on this?'" Doutrich asked.

"Only when the court had notified my office that there had been a file." Grab replied. He said that had been the end of the conversation.

Doutrich said he had been at various school board meetings with board members and Director of Operations Tom Strickler in which he was directed to file with the Lancaster County Court of Common Pleas for an open board seat. "Folks, it's not that simple," Doutrich said. "I know I got an education through the process, but if I had to do over - the embarrassment that it caused for the borough - I would've never filed for this position. And through the process, folks, something smells."

Doutrich asked the board when they found out about the decision. Grab replied that he had found out at about 4:30 p.m. when he checked the prothonotary's website. "The board has no knowledge of the dismissal of your petition. I just found out myself, and as the meeting progressed, I was going to advise the board that it happened.” Grab said he had already advised the board what their jurisdictional authority is to appoint someone if they wished to proceed to do that. "But they were not aware that the petition had actually been dismissed by the court,” Grab said.

Doutrich then asked if Grab agreed that he had stated to the judge that the petition be dismissed. Grab said that the court had contacted his office to advise that it had received some form of filing “purported to be a petition.” He said he had indicated to the court that the board's position would be that unless the petition met the requirements of the rules of procedure, in general it would not be a valid. He said that the court indicated that the file did not require a formal response at that time.

Doutrich questioned the board about the urgency of holding the special meeting, citing the school board brief in LNP which stated that the board can conduct business with only eight members as it awaits a court decision. (The board had previously voted to table a decision pending a judge's decision.) "What was the urgency to have this meeting without knowing that the judge had rejected this?" Doutrich asked.

Doutrich asked why, if some board members had known that two letters of interest had been filed within the 30 days, the board didn't act. "Had they done that, none of us would be here now."

Doutrich asked Board President Keith Combs who is responsible to relay that information to board members. Combs said it would have been his [Combs's] responsibility. He said he found out about the letters of interest on January 6. He explained that he had been out of state at that time on a family matter, and when he returned he sent out a meeting notification. “I still look at it from the standpoint that if there were questions about how the board should proceed at that point that someone else may have stepped up to answer those questions or seek a motion to have a meeting scheduled so that we could proceed," Combs said.

Doutrich said the judge called him and didn't appear to know how to move forward with the process. Doutrich added he believed this was something new to the judge and that court employees also didn't understand what he was applying for. Grab said the form of the petition filed may have been confusing to the court as to what it was Doutrich was seeking.

After a motion by Iris Garrido and second by Vickie Anspach the board voted 7-0 to appoint Jenna Geesey to the open seat.

Board member Barry Ford, attending by phone, did not respond on the roll call vote.

Doutrich asked Columbia Spy to relay his congratulations to Jenna Geesey who was appointed to the board Wednesday night.  He thanks all citizens and friends who supported him during this effort.

I spoke with an attorney from the School Board Association prior to the decision being rendered and she said there's only about ten lawyers in the state that know school law. I hope that Mr. Grab is one of those ten. There's a lot of school boards in this state so that's a lot of boards being represented by attorneys that apparently do not know school law. She also said that a case like this only happens about once a year in the entire state.

We need the name of one of these !0 lawyers who knows school law and hire them to end this agreement /contract with Elanco.

If you have the name of one of these attorney's that knows school law, please post it.I am interested in following up on this regarding the legality of this Elanco contract.

The school board association lawyer did not give names, only the number of those with an understanding of school law. She was limited in what she could say regarding this because Columbia is a member. Being a member is not free, it comes with a price of over $5,000/year.