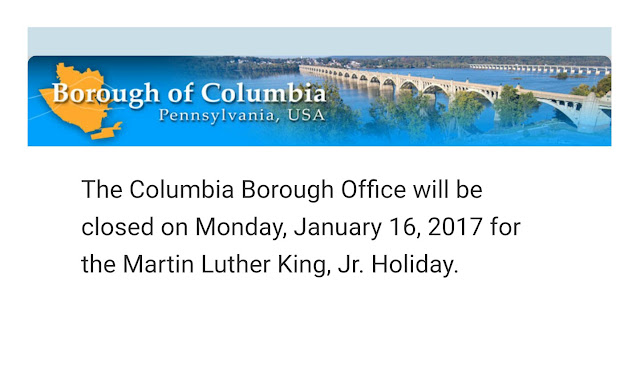 Offices may be closed more than just Monday, if the Mayor and others have their way! Can't wait until someone tries to get into the police department after they lock the front door and tell them they have to go through the boro office side for everything. Wonder what the code officers and women in that office will do when people go through to try to get to the public restrooms and the police dept. Of course the mayor will be safe in his little, caccoon of an office, which is part of the closing of the public restrooms. MORE MONEY SPENT FOR STUPID SHIT, PRIVATE OFFICES FOR SOMEONE THAT SHOULD GET THROWN OUT OF HIS POSITION AS 'MAYOR!' AND the council and money managing people should be thrown out, also. This town is going down the tubes quick, from all the cash being spent for all this!

Where and when was it announced that the doors to PD will be locked? I missed that and would like to know. Will there still be a dispatcher on duty?

Out of control and the taxpayers can do nothing but continue to pay or sell.
Does any elected or paid official care?

I heard the same rumor or story. Police Chief is CLOSING the lobby to the Police Station!!! WTH? Time to regionalize. Morale is at its lowest ever in history. Homeowning taxpayers DO have a say, but most won't attend Boro Council mtgs. What a sin....by NOT attending, we all give this spend crazy COuncil the go ahead to continue the wasteful spending....because they DON"T hear how the MAJORITY OF ITS TAXPAYERS FEEL.....

Council hears and knows how the majority feel!
It's irrelevant to their personal agendas.

I can't say that I blame them for not attending meetings that drag on for hours before a resident can comment on non agenda items. Not everyone has the luxury of hanging out in council chambers for hours on end.