Shown below is a September 8, 2016 letter from the Columbia Municipal Authority to Columbia Borough Council urging council not to dissolve the authority. The unanimous vote for dissolution subsequently took place at the regular council meeting on September 12. At the time, Council President Kelly Murphy said there was no animosity between the authority and the borough over the decision. According to an LNP article ("Municipal Briefs" 9/21/16), Borough Manager Greg Sahd said the entity was no longer needed because its chief responsibility was to manage the borough's sewer system. [The wastewater operation was sold to LASA in 2015.] The authority's letter, however, specifies numerous benefits to the borough in keeping the authority.

At a special meeting on Monday, November 28, 2016, council voted to fund a $75,800 study on the feasibility of converting the borough's wastewater plant to a facility that would produce natural gas. The authority's letter appears to assert the authority's expertise in advising council on just such a venture - at no cost to the borough. 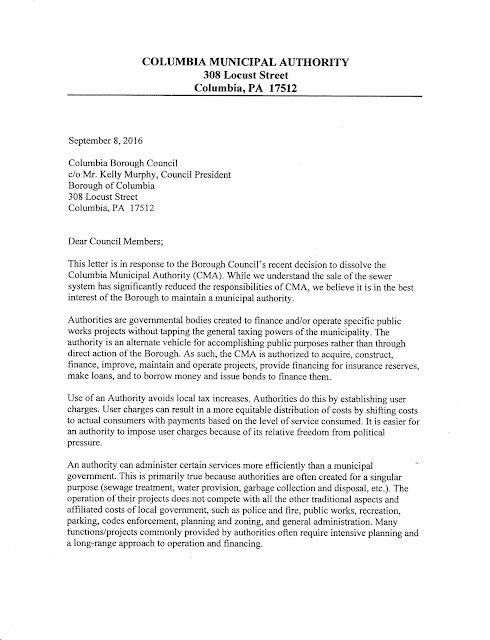 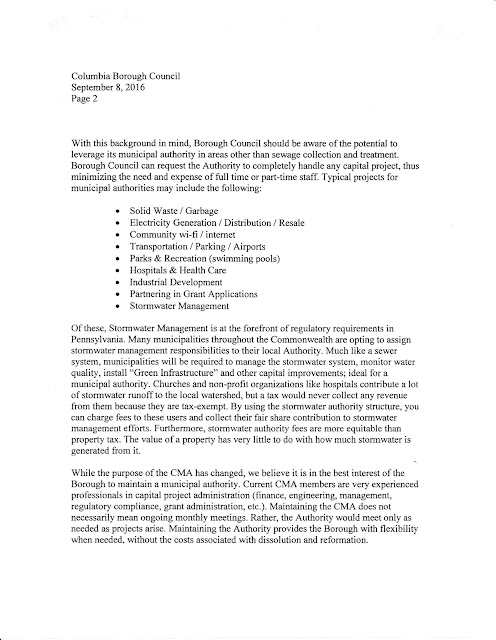 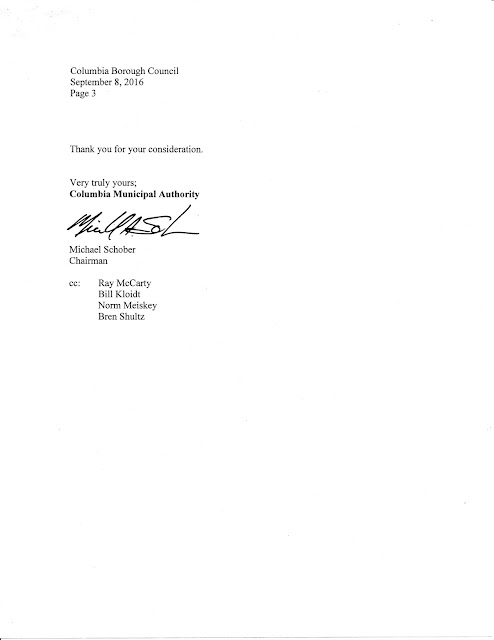 Shown below is the authority's October 20, 2016 meeting agenda that includes recent balances. All assets of the authority are to be turned over to the borough. 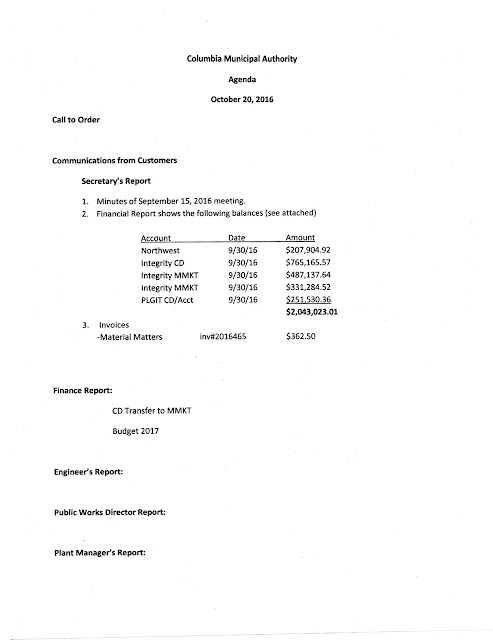 The taxpayers in this borough have every right to know what is in this letter, to keep this information from them until after the vote to dissolve the authority is reprehensible.

It was all about the $2,000,000 that Cleon and Kelly's Brigade wanted so they could sink it into the Columbia Market House and other personal agenda items. Since all the LASA money is invested, where did you think they could get a lump sum.
This was a slap in the face for the Authority, and could hurt the Borough in the next several decades of growth.Remember who sat in all the LASA meeting through the negotiations, the former Market House Trust. But when sequestered to be in attendance for a Borough Council Meeting, they would send one of lower Directors, not the Officers.

This could be the worst Borough Council I have ever seen, with no care of fiscal responsibility.

Council is pushing projects through at taxpayers expense disguised as "Professional Services."

Actually, I have heard others say that this is the worst council in recollection.

I believe it was a mistake to dissolve the authority. Like stated in their letter, they could be used in other projects and money is easier to obtain.It seems this council and mayor have objectives in mind with no regards on spending. What happens when the money is gone. If they want to spend that money, use it on streets and other programs, like for recreation and youth services.

The real meetings are held on South Second Street, not at Boro hall. Those two are running the borough into the ground with their own agendas.

It is a one sided council that needs to be dismantled and new appointees in the primaries in 2017. I heard there is possibly is a group of new candidates being assembled that has vision not only to visitors, but the citizens of Columbia. Council has appointed three new Councilors in the last year,and a fourth Sherry Welsh not officially a voted Council member (a Columbia voting blunder).

There is no problem spending thousands on a study, but look how some of our non-profit organizations have to beg for significantly less money.

Maybe it is time to look at the budget items and see what ones the coffee club really back and bring light to them.This group is spending too much money on studies and nothing to show for it.If this would be industry they would be fired. Remember, we vote for local offices in 2017.

Maybe if you are favoured by the Second Street coffee club the non profits would get some money.

Perhaps if those councilors who we, the citizens, voted for could actually stay the course of their commitment, Council wouldn't have to appoint people. How many people have resigned without completing their commitment? They're who we need to be upset with. Why take that out on the people who volunteer to step up and end up being appointed? I think Sherry Welsh was appointed at the April or May 2015 regular Council meeting in the same fashion as the other appointed members.

Also time to check background of council members for lawsuits, and criminal offences such as DUI's. No one should be elected to public office who breaks the law, has bad credit, or has legal judgments against them. People with poor credit ratings should never be in a position to spend public money.

Remember borough council, when you took your oath of office, it is to serve all the residents of Columbia,not yourselves. Also, your meetings are at 308 Locust St.,not down at the coffee shop on 2nd street. The recent election showed people are fed up with government like it is now. That goes for the local level,too.

All great concerns and posts to the travesty this Borough Council has shown in the last year. We as citizens need to get all of the vote around town, not just from one ward. Candidates must get out and earn the vote by speaking to businesses and citizens of their needs and make sure they stand for what they believe in. We are strong with our comments, but weak with our impact.

HUGE MISTAKE to remove the Municipal Authority. This council liokes to spend spend spend. Not sure where they live. People are losing their homes EVERY day. STOP THE IRRESPONSIBLE SPENDING.

Interested redsidents. First off, ask for accountability of where the $8.6 MILLION went from the sale of the Sewer plant.

Personally I'd love to see candidates for council walking in ALL sections of the borough. Talking with residents on a casual one on one basis is key to getting them out to vote. Most working people don't have time to attend meetings. Those desiring to serve need to show or prove they care. No one should apply or run that is doing so to pursue a personal agenda project.

This is why a new team is being assembled regardless of political affiliation. Commitment and growth for the Borough of Columbia will be our standard. This town has so much potential and has been sitting on its hands for too long. If you are interested becoming a team member, regardless of being a candidate or supporter, please email me at redrutabaga@gmail.com. Thank you!

Still in the bank being invested. Every penny of it.

Once again all these ideas for the future of Columbia are nice, but when your taxes aren't competitive with the surrounding communities , & the future debt to income ratio looks so bad you can't get private investment to buy in. You can't have debt & costs increasing & no way of covering it. Simple business rules.

Are you absolutely sure???? When the talks were going on , it was said that a $$$$$$ 5 MILLION DOLLAR DEBT WOULD BE PAID OFF FIRST. THAT LEFT $3.6 MIL. AND THERE'S NO WAY MUCH OF THATS LEFT. Either highway gets new equipment worth hundreds of thousands or police keep getting new cars. something is VERY wrong with this picture

quite a few out of towners were/are looking at investing in the borough. someone scares them off. WHO?????
also, WHY did Kleen Rite leave town?????
the boro creates other new zoning to accommodate different situations, not sure how or why this happened? and WHO EVER IS RESPONSIBLE SHOULD BE LET GO. period. this town NEEDS businesses.

Why weren't all of the comments submitted, posted?